Ocasio-Cortez Melts Down Over Criticism Of Fake Black Accent 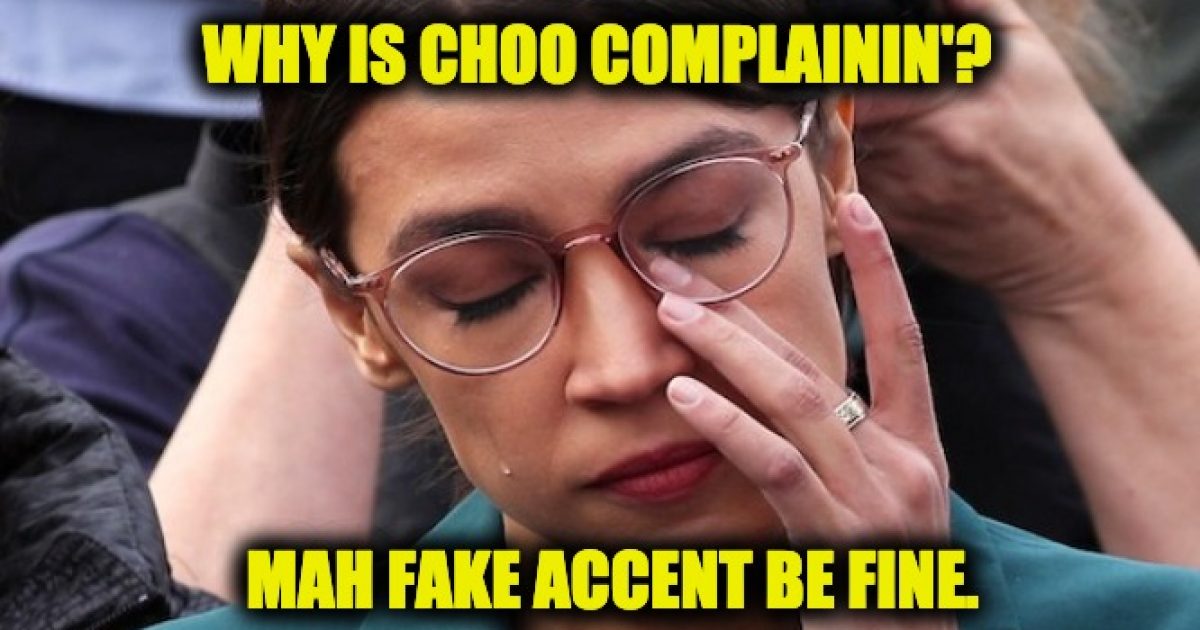 Alexandria Ocasio-Cortez: I’m from the Bronx, I talk like it.

If a Republican used a fake African American accent while talking to a black audience telling them it’s ok to fold clothes, cook, and driving other people around, as Alexandria Ocasio-Cortez did, Democrats would be having a conniption.

This voice is actually so incredibly racist, I’m surprised blacks haven’t spoken out about this. Disgracefully really. She’s almost as bad as Hillary… Where’s the hot sauce?

Ocasio-Cortez speaks in an accent that she never uses while telling a room of predominately black people that there is nothing wrong with them folding clothes, cooking, and driving other people around on a bus for a living. pic.twitter.com/FIbIAPokt0

As much as the right wants to distort & deflect, I am from the Bronx. I act & talk like it, *especially* when I’m fired up and especially when I’m home.

It is so hurtful to see how every aspect of my life is weaponized against me, yet somehow asserted as false at the same time.

I’m not buying it. It was the vocal equivalency of Black Face. She reduced her audience to a simple stereotype and mocked them all while thinking she was just keeping it real and making it easier to relate her. It’s patronizing!

Rep. Alexandria Ocasio-Cortez (D-NY) responded to criticism for her patronizing use of a fake accent in front of a black audience in the usual manner — crybabying.

The humiliating video quickly made the rounds on social media, earning the criticism and ridicule it deserved.

The video is as shocking as it is excruciating. All of a sudden, the Westchester socialist, who is famous for her Jerry the Mouse voice, starts talking like a black preacher.

“This is what organizing looks like. This is what building power looks like,” Ocasio-Crazy said with her affected cadence. “This is what changing the country looks like. It’s when we choose to show up and occupy the room and talk about the things that matter most, talking about our future.”

Yes, she’s a faker, just trying to endear herself with a black audience by adding a little soul to her voice just like Hillary did. It’s pathetic and very condescending, but isn’t that really the point of identity politics?

Thank you @bennyjohnson for this video

Both are despicable and highly disrespectful pic.twitter.com/YCSVnu0gE5

Candice Owens had some words about AOC’s Ebonics: