LMAO: AOC Doesn’t Understand A Metaphor — Gets Destroyed On Twitter 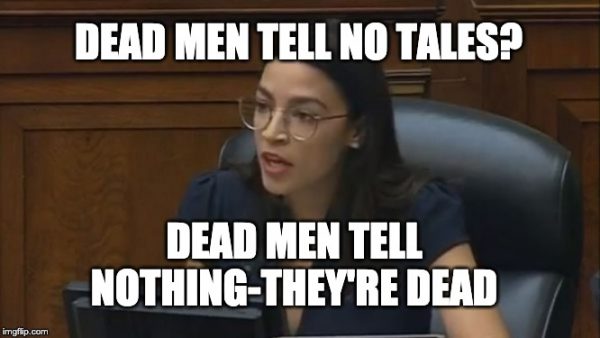 Stupid is as stupid does.  A video of bartender turned Congresswoman was getting a lot of attention on Twitter for all the wrong reasons. It is coming back to haunt her. AOC doesn’t understand

It seems that Rep. Alexandria Ocasio-Cortez(D-NY) is very upset by a common metaphor for working hard — “lift yourself up by your bootstraps.” She explained that it’s “a physical impossibility to lift yourself up by a bootstrap — by your shoelaces.”

.@AOC on America’s rags-to-riches ideal: “It’s a physical impossibility to lift yourself up by a bootstrap, by your shoelaces? It’s physically impossible. The whole thing is a joke.” pic.twitter.com/9WNf8UE06T

It is astounding that AOC can be so consistently wrong on everything. You’d think that statistically, she’d be correct at least occasionally. But it seems that the old joke that “even a stopped clock is right twice a day” doesn’t seem applicable to AOC.

Of course, this is the kind of thing that happens when you get your opinions directly from articles on HuffPo:

“Pull yourself up by your bootstraps.” It’s a common phrase in American political discourse, particularly present in conservative rhetoric about self-reliance.

The concept is simple: To pull yourself up by your bootstraps means to succeed or elevate yourself without any outside help.

But when you examine this expression and its current meaning, it doesn’t seem to make much sense.

To pull yourself up by your bootstraps is actually physically impossible. In fact, the original meaning of the phrase was more along the lines of “to try to do something completely absurd.”

After a few hours of mockery, AOC tweeted out a video of Rev. Dr. Martin Luther King Jr. speaking about the difficulty African Americans faced in pulling themselves up by their bootstraps because of the legacy of slavery, institutional racism, and segregation — which were all still things that MLK’s civil rights movement was addressing. Interestingly, even though he says that telling “someone with no boots” to lift themselves up by their own bootstraps ignores the legacy of slavery and segregation, MLK still says, “Now I believe we ought to do all we can and seek to lift ourselves by our own bootstraps.”

What does “bootstrapping” mean to the GOP?
That you didn’t go to public school?
That you didn’t enlist in the military, which is funded by the gov?
That you never got a tax break for starting a business or buying a home?
That your parents never used food assistance to feed you?

She then takes a shot at President Trump and his family for inheriting wealth and cites her own story about how hard she worked to get elected but denying that her hard work was “bootstrapping.”

I worked my butt off to get elected against all odds, without any special connections or money. I worked double shifts and wore through my shoes, outspent 10:1 to get elected.

Even w/ all that hard work, it would be narcissistic to pretend I “bootstrapped” it alone & w/o others.

Some mocked AOC’s bizarre literal take of the commonly used metaphor, but also that she didn’t even realize the irony of a woman who went from bartender to Congresswoman stating that you can’t accomplish things with hard work. Admittedly, AOC worked very hard knocking on doors to win against Joe Crowley a 10-term incumbent and the Democratic Caucus Chair. It was a huge upset.

Lachlan Markay of the Daily Beast tweeted, “Long gone are the days when, say, a lower-middle-class, outer-borough bartender could ascend to the commanding heights of America’s ruling elite.”

Long gone are the days when, say, a lower-middle class, outer-borough bartender could ascend to the commanding heights of America's ruling elite https://t.co/NCA8R28XkR

Conservative commentator, Lauren Chen thought it was hilarious. She wrote, “Not sure what’s funnier: >AOC taking metaphors literally >AOC, a former bartender who is now a congressman, dismissing the idea of pulling yourself up by the bootstraps.”

Not sure what's funnier:

>AOC, a former bartender who is now a congressman, dismissing the idea of pulling yourself up by the bootstraps https://t.co/VuMYnlEmtR

There were also many tweets mocking Rep. Ocasio-Cortez by pretending to not understand metaphors. They were under the hashtag #AOCsplaining.

Did you have to get plastic surgery? Did your butt get caught in the bar's blender at work. How else would you work it off? It doesn't make any sense! It's so stupid! #Aocsplaining https://t.co/SwiO2cgh3R

I worked my fingers to the bone, and now I'll never be able to play the guitar again.#AOCsplaining

no one could actually bite a bullet. YOU WOULD DIE #AOCsplaining

If you walk a mile in someone else's shoes, your feet might hurt and you're a mile away from your own shoes. #AOCsplaining

It is physically impossible to zip my lips. MY LIPS DO NOT HAVE A ZIPPER, MOM.#AOCsplaining

How can you possibly pinch pennies??? I've held pennies between my fingers. They're, like hard, and junk! And even if you could, they don't let out a yelp or anything!

I mean, imagine how much blood you would have if you put your nose to the grindstone.

No one does that.

It would also make the grindstone messy.

And what's a grindstone anyway?

How can a bird in the hand be worth two in the bush? That's bad math.

How can you believe any thing a little bird tells you? LITTLE BIRDS CAN’T TALK

How does anyone wake up at the crack of dawn????

I never heard a crack when the Sun came up. It's totes quiet and you'll sleep right through it!!!

A couple of Twitter users had a whole lot of fun with this hashtag:

A penny saved is not a penny earned because you already earned it and now you're saving it. Also, saving pennies is stupid because they're barely worth a nickel.#AOCsplaining

Birds of a feather flock together? All birds have feathers. Do you see them all flocking together? And what is flocking anyway?#AOCsplaining

If you beat a dead horse you'll get blood and stuff all over. #AOCsplaining pic.twitter.com/euCM8X10nX

Straws are really light. They can't break a camel's back. #AOCsplaining

You can't drive someone up the wall cause cars won't drive on walls. ?‍♀️#AOCsplaining

If you've got ants in your pants you need to stop sitting on the ground. Duh.#AOCsplaining

The liberal media keeps saying that conservatives are obsessed with AOC. They tell us to let sleeping dogs lie.  I for one always let my dog lie when she’s sleeping. After all, a dog is a man’s best friend.  As for AOC, it’s not that she’s an obsession, it’s just that she says so many wrong things and does it in such a spectacularly bad way that it’s difficult to ignore her.  AOC has never learned it’s better to remain silent and be thought a fool than to speak and remove all doubt.

She has the singular ability to be a true believer of all things progressive, completely incapable of coherent thought while being loudly and obnoxiously asserting her ignorance as knowledge. As the saying goes a chain is only as strong as its weakest link, and AOC’s lack of mental capacity is the Democrats’ weakest link.

If I didn’t know better, I’d think that this was just the best performance art that I’ve ever seen… but she’s simply not bright enough to pull off an act like that for this long.  Shakespeare, the Bard, who AOC would probably call the bird, may have been talking about AOC when he wrote in his play Troilus and Cressida, “Thou hast no more brain than I have in mine elbows.”
Cross-Posted With Clash Daily.