Antifa Group That Confronted Cruz At Restaurant Mon., Threatens Him On Tues. 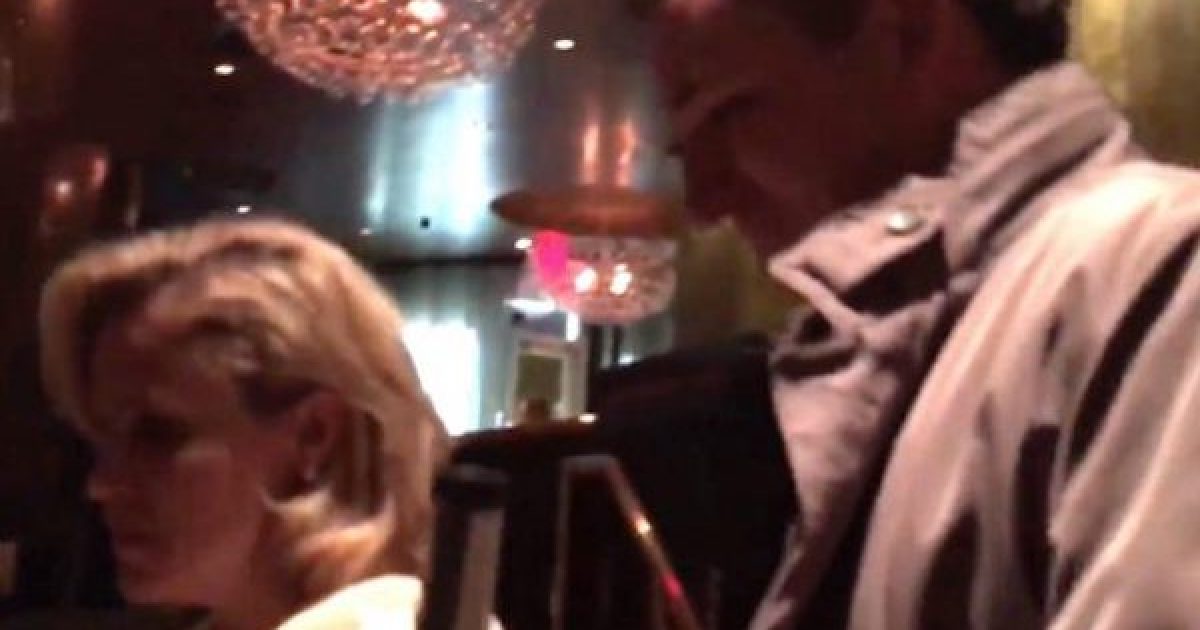 Sadly the fact that liberals have turned to violence and intimidation for their political expression has become a regular topic on this site, and it has happened again. Senator Ted Cruz and his wife Heidi were chased out of a Washington, D.C. restaurant — a “fancy restaurant” according to the hecklers.  This happened Monday evening from a group that supports Antifa. They followed up with making threats on Twitter to Ted Cruz, Bret Kavanaugh, Donald Trump, and of course the rest of us “right-wing scum.”

Members of the ‘Smash Racism DC’ group, supporters of Antifa, yelled “we believe supporters” hounded Cruz over his support for Supreme Court nominee Brett Kavanaugh, who is facing sexual assault allegations which he denies.

The activists shouted “We believe survivors” and “Sexist, racist, anti-gay!” while a woman quizzed the Texas GOP senator whether he believes the women making the allegations against Kavanaugh.

Here is the total video:

The below is tweeted out from the hate group who attacked and threatened Senator and Mrs. Cruz:

p1. No—you can’t eat in peace—your politics are an attack on all of us

You’re votes are a death wish. Your votes are hate crimes.

We could have dined on a lavish four-course meal for only $145 while millions of Americans struggle to buy groceries. He might have sampled from the top shelf wine list as migrant children languish in cages.

He’d have laughed with his wife while women and members of the LGBTQ community collectively gasp in horror as Senator Cruz pushes forward on Bret Kavanaugh’s Supreme Court nomination. At least he could have had activists not interrupted his evening just as he was being seated

While our interruption does not compare in scale to the interruptions his actions as a Senator have had on millions of American lives, we hope that it reminds Cruz and others like him that they are not safe from the people they have hurt.

And they finished with a threat (Emphasis added):

“This is a message to Ted Cruz, Bret Kavanaugh, Donald Trump and the rest of the racist, sexist, transphobic, and homophobic right-wing scum: You are not safe. We will find you. We will expose you. We will take from you the peace you have taken from so many others.”

p6. This is a message to Ted Cruz, Bret Kavanaugh, Donald Trump and the rest of the racist, sexist, transphobic, and homophobic right-wing scum: You are not safe. We will find you. We will expose you. We will take from you the peace you have taken from so many others.

The above tweet was taken down, I guess the cowardly terrorists were not too brave.

If you are wondering how can something like this happen, just look at what  Mad Maxine Waters told supporters earlier this summer.

“If you see anybody from that Cabinet in a restaurant, in a department store, at a gasoline station, you get out and you create a crowd and you push back on them, and you tell them they’re not welcome anymore, anywhere.”

I feel so bad for Ted and Heidi Cruz and hope that Congress sees its way to censure Maxine Waters. I just wonder when the Liberal Media will condemn liberal violence.

Todat the mainstream media and the Democratic Party are appeasing the leftist violence. If they don’t start objecting loud and clear very soon, the harrasing will become violence, the violence will become murders and mass murderers. And then it wil be too late.

Below is just a few examples of how the liberals are conducting business these days:

California left-winger was arrested after attacking a Republican candidate with a switchblade while screaming anti-Trump rhetoric.

VIDEO: White Antifa gets in black man’s face after black man tries to have a civil conversation. A white man punches a black man, the black man takes white Antifa man down

VIDEO: ANTIFA riot in Portland on May Day

PHOTO: Mug Shots of ANTIFA rioters after their May Day riot where they destroyed public/private property

Exceptional article on Antifa and left-wing violence by Ian Tuttle for National Review. The last line: “The Antifa ideology can only produce enemies

VIDEO: Man gets attacked at anti-Sharia protest by Antifa

Antifa Chick dude hits police horse with flag pole with a nail attached to it in the neck. Mug shot

“The self-professed “Vandals of UT,” say they are responding to no specific incident but “the everyday crisis that is rape culture, white supremacy, and elitism.” Their goal is “the destruction, looting, and emptying out of these halls of power by the force of the unruly masses—the excluded and exploited,” adding that they hope to “inspire other insurgent acts.”

Fraternity member stabbed to death, three other wounded after the stuff posted above

Video: Woman with MAGA hat gets maced by Antifa clown after she says she supports the nonviolent protestors

Protesters at Berkeley light fires, hurl rocks and fireworks at police, smash windows of the student center, and cause the campus to lock down due to Milo speaking

Video: Woman at Berkeley gets hit over the head repeatedly with the object, someone gets knocked out by anti-Milo rioters

Video: Anti-Milo rioters chase attendees and beat them, another one ends up unconscious, nearly to death

AR15 member at protests and takes pictures of the aftermath

Organizer of Milo protest pleased with the level of violence, calls for a violent uprising against Trump and Trump supporters VIDEO in link

Woman’s March protester collapses, Trump Hotel worker rushes to aid her with AED, gets booed by the crowd for working at Trump hotel while trying to render aid to one of the dumb ####s

VIDEO: Woman on plane berates a Trump supporter, demands for him to be moved, gets booted off the plane and passengers applaud her removal

Madonna thinks about blowing up the White House, talks about the Revolution of Love, then tells detractors “#### you.”

SNL writer Tweets “Barron will be the first homeschool shooter.”

Protesters light a fire in street, throw embers at cops, and destroy a limo

Video: Protesters block checkpoints and people’s freedom of movement- Airmen blocked from attendance while in uniform

Violence at the Deploraball: assault, eggs thrown, batteries thrown, and theft of property

They start ’em young: chunky left-wing kid starts a fire, brags to media about it, then says “screw our President.” Little #### is so dumb he doesn’t realize Obama is still president

Protesters of a Trump Victory Destroy property in Oakland

The Occupy movement has a horrific record of violence. Occupy Wall Street Exposed has counted a dozen deaths, including three murders; more than a dozen rapes; more than 25 disgusting cases of indecent exposure, public defecation, etc.; more than 500 thefts; more than 6,800 arrests; and in excess of $12 million in property damage. A sorry record by any standard.

Sophomore gets viciously beat up after Trump win for supporting Trump

Video of Oregon protesters smashing a jeer, spray painting it

Man with MAGA hat gets choked on NYC subway

Four Animals kidnap a guy, beat him while shouting “#### Donald Trump” (not confirmed if the victim is Trump supporter) and appear to scalp him. Hate crime, but the victim is white so don’t hold your breath

The violence extends to Canada! Woman’s March in Edmonton female reporter gets harassed and punched in the face by an anti-Trump male, feminists protect HIM and victim blame the female reporter. She does a post commentary and humiliates the woman abuser

Trump supporter has ear bitten off, fingers twisted by an anti-Trump roommate

Man has Trump signs messed with thrice. One would be thief and his #### stain friend push homeowner to the ground after attempting to steal from him

VIDEO: Pro-Trump counter protestor gets knocked out and suffers a concussion after being hit in the head three times by a metal object in Oregon

Antifa harass and assault Gavin McIness speech attendees, try to shut down him speaking- Video inside

12 Y/O gets attacked on a school bus for wearing MAGA hat, then gets suspended. Politically motivated

Anti-Trump protesters block ambulance with a critically ill man in the back. Cops try to remove man blocking ambulance. Man pushes a cop, gets arrested and EMTs are forced to perform a life saving procedure in Ambulance and not at the hospital

VIDEO: Man pulls MSR on another man with Trump flag, threatens him

Protesters turn violent with police at a #notmypresident rally in Portland. Over a dozen arrested

Shakespeare in the Park in NYC does Julius Caesar, Trump gets stabbed by senators

College Female attacked by a male for wearing MAGA Hat

“There will be casualties on both sides. There will be, because people have to die to make a change in this world.”

Secession plans for Oregon and California due to Trump

25 DEC 2016: Drexel professor tweets “all I want for Christmas is white genocide.”

The University of Wisconsin African-American studies course 405 “The Problem with Whiteness.”

Leftist slander Milo, Chicago Review of Books bans Simon and Schuster from their reviews due to them publishing his semi-autobiography (they reveal they hate the 1st amendment and facts)

Senator McCaskill has a sexist message for men

The University of Wisconsin offers classes teaching the negatives of Masculinity

Feminist calls for the killing of all males and male babies

Left-wingers slam Jeff Sessions for holding Asian toddler before his senate hearing. One says the girl is a prop stolen from Toys ‘r Us. Turns out it’s his biological granddaughter

Ivanka Trump harassed on a plane by a liberal professor

Comedy Central writer Stephan Spinola tweets “Barron Trump looks like a date rapist to be.” And talks about Barron raping his mother

Chelsea Handler: FLOTUS can’t come on my show because she barely speaks English

Screen Shot: Another Anti-Trumper who happens to be a criminal posts on FB #### about Barron Trump, incest/pedo Bull####

20 y/o BU student is so smart she posted a video of her stealing Trump signs, gets busted

German newspaper editor writes of murder in the White House

Video: BLM activist preschool teacher calls for whites to hand over their money and houses and wants to kill white people and the white house

Sarah Silverman calls for a military coup against Trump

VIDEO: Liberal professor screams at NYPD calling them all sorts of names for protecting Gavin McInnes and his attendees

Republican law makers see growing hostility, one had to be given police escort out of town hall meeting

Education Secretary Betsy DeVos blocked by protesters from entering school and from leaving. One jumps on vehicle

Secretary DeVos under US Marshall protection due to too many threats

Sec. Ed. DeVos receives more death threats than any other one before with a security cost of 8 million thus far

VIDEO: California Democrat Chair leads Democrats with “#### Trump” and middle fingers before the head of the DNC, Tom Perez, speaks. Also calls out a protester being a #### disturber while encouraging democrats to protest republicans

Republicans facing death threats, have their dead children mocked, and get boos for saying rights come from God