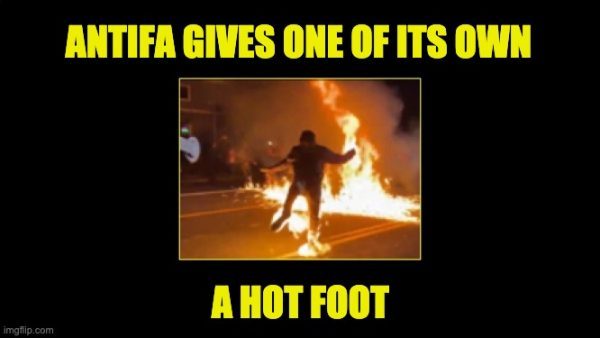 Saturday night marked the 100th night of rioting in Portland with fireworks in the suburbs. The fireworks were set off by Antifa and were targeting police…but hey, it was still festive! (Sorta). Well…it was festive for Karmas as one Antifa terrorist got a hot foot, and twitter got musically creative.

The Media calls it “unrest” in Portland, but the rest of us can clearly see that the violence and destruction at these “peaceful protests” is really rioting.   But it’s no longer just the federal courthouse and the local police stations that are targets for the mob–on Saturday, they hit the suburbs. The mayor allowed the Portland P.D. to quickly act, and quickly call it a riot,

“You’re setting fires in the streets? No, that’s violence. That’s violent. Get out of my way” A woman demands to be let through the street, which protesters have blockaded near the precinct #Portland #PortlandProtests pic.twitter.com/wAiZfJcotf

It got pretty wild in the burbs before 9 PM.

It’s like a war zone in the residential area of SE Portland where antifa are rioting tonight. #PortlandRiots pic.twitter.com/UkgoL4pRPB

At one point, a molotov cocktail was thrown at police, and it hit the ground near one of the Antifa members and set his feet on fire (I don’t wish for anyone to get hurt, but better him than a cop). And his burning trot was amusing. People on Twitter added sound to the video to make it even more amusing.

Graphic: #Antifa rioters throw a Molotov cocktail in direction of police in SE Portland. It lands next to people, setting one on fire. Video by @TaylerUSA. #PortlandRiots pic.twitter.com/NJfEURKfkC

The police had to move in to help these idiots put out the flame because Antifa knows how to make fires, not how to put them out.

Some Twitter users saw the video and couldn’t help but notice that it was pretty damned hilarious. That spurred some creativity as some saw an opportunity for comedy gold by adding an appropriate soundtrack.

I automatically thought of The Benny Hill Theme song when I first saw this @BGOnTheScene video. (Turn sound on) pic.twitter.com/PwCKaZGRKE

It does fit perfectly.

There was something for everyone.

The jokes made themselves.

This rap fan enjoyed it.

That Antifa dude had some moves considering he was on fire…

I couldn't help myself with this edit… pic.twitter.com/VjULa4N2Kt

I’m going to hell for this.

i was inspired to put it to a different song 😀 pic.twitter.com/ZDUfMCH2X0

One guy did a play-by-play of “Andy Tifa” lighting himself on fire.

The next few are absolutely hilarious!

I wonder if the Antifa hot foot guy went to Club Med.

Ah, this is the one I was waiting for.

“We didn’t start the fire” pic.twitter.com/uR42KGqjYZ

BTW Ezra, they DID start the fire.

The fire might have traveled higher than we thought

OUCH, This had to hurt pic.twitter.com/S7lkR2a8Xs

Which led to this version.

This girl is on fire ? pic.twitter.com/Nnlgwo9VjO

Social media can be a toxic hellhole, but once in a while, it redeems itself.

Mocking cosplaying terrorists is one of those times.

Parts of this video was first seen at Clash Daily