Gov. Andrew Cuomo Shows His Disdain For The Rule Of Law, AGAIN! 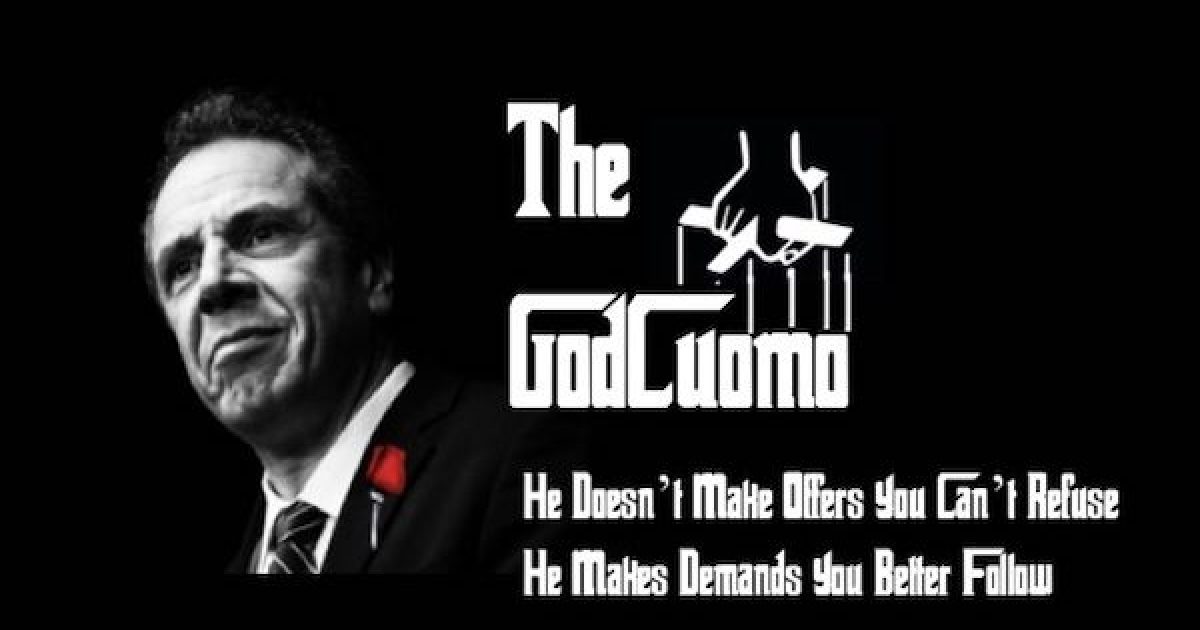 Making a public display of not caring about the rule of law, NY State dictator Andrew Cuomo pushed through and signed a bill granting illegal aliens the right to a drivers license.

New York’s Governor Andrew Cuomo rules the state with an iron fist. New York is the state with the highest tax burden in the country, but the Governor has fracking despite the likely existence of trillions of cubic feet of natural gas underground that could add thousands of jobs for upstate New Yorkers and given the state a revenue stream that might help lower taxes.  He’s fought the Second Amendment by pressuring several financial service providers, banks, and insurance providers against doing business with the NRA. He was accused of threatening organizations that did not endorse him for re-election: “Bill Lipton, the Working Families Party’s state director, said he was present at a meeting earlier in the week where Cuomo warned, “If unions or anyone give money to any of these groups, they can lose my number.” Cuomo has said that people disagree with him weren’t welcome in his state, “Are they these extreme conservatives who are right-to-life, pro-assault-weapon, anti-gay? Is that who they are? Because if that’s who they are and they’re the extreme conservatives, they have no place in the state of New York.”

Cuomo signed the “Green Light Bill” late in the evening because, as anybody knows from the SAFE Act oppressive gun law controversy years ago, the Democrat has a penchant for cowardly taking controversial actions in the dead of night.

He did so within hours of the measure passing the Democrat-controlled state Senate by a vote of 33-29.

Cuomo, according to the New York Post, threw “supporters a last-minute curveball” by asking for further legal scrutiny of the legislation. The purpose of the request was not to make sure the law adheres to federal law or the Constitution but to guarantee it couldn’t be used by law enforcement against illegal aliens.

The far-left Cuomo requested that Solicitor General Barbara Underwood review the bill to “ensure that undocumented individuals who apply for driver’s licenses or identification cards would not be unintentionally exposed to a federal government seeking to use their information for deportation.” After all, Cuomo’s opinion outranks federal law.

This, according to a statement from Cuomo’s counsel, Alphonso Davis, who added: “Governor Cuomo has supported this policy for over a decade.”

Indeed, criminals in New York have a dear, dear friend in Andrew Cuomo.

This is most definitely a stepping stone to allowing illegal aliens the right to vote in New York state elections, or at the very least giving them the means to do so without much scrutiny.

Granting illegals driver’s licenses is just the latest in a long line of examples in which New York Democrats have championed the rights of criminals over law-abiding citizens.

Cuomo has pushed the idea of free college courses for inmates for years. In addition to education perks for convicts, Cuomo pushed hard to provide taxpayer-funded Medicaid to all former prisoners.

In sharp contrast, Cuomo’s Democrats in the New York State Assembly recently voted to halt a bill that would have provided free college tuition for Gold Star families.  But a week later,  the governor whose word is law pushed through and signed a bill, granting financial aid to illegal aliens.

Despite New York’s being a liberal cesspool that rivals California daily, the new legislation granting driver’s licenses to illegals has plenty of critics. “Paroling cop-killers, legalizing infanticide and giving free college and driver’s licenses to illegal immigrants, is just another example of  Dictator Cuomo being in lockstep with radicals, and his lack of concern about taxpaying New Yorkers,

Republican state Senator Jim Tedisco said granting a free pass to illegals is a slap in the face to people who come to this country legally:

Giving driver’s licenses to those here illegally sends the wrong message to honest, law-abiding citizens and those who are trying to do the right thing and have been in line for quite some time to become American citizens.

But it really doesn’t matter what is fair or legal, because Andrew Cuomo says so.