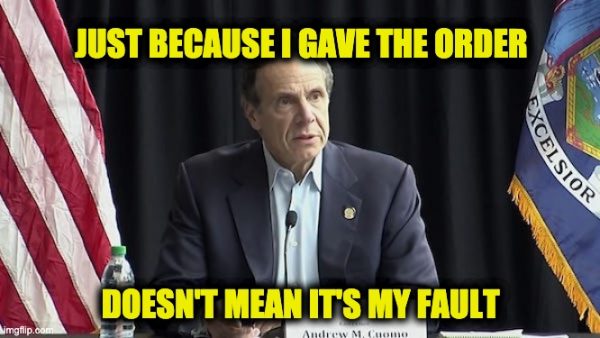 New York Governor Andrew Cuomo has either lost his ability to make rational statements or he has moved to Egypt and is living in a state of de-Nile. On Monday, he told Stephanie Rule of MSNBC that the accusations that his office was responsible for the overwhelming number of nursing home deaths in NY State were a “political charade.” Andrew Cuomo Nursing Home Deaths.

“So, New York had more cases, more deaths, and more deaths in nursing home because that’s who the virus affects. It affects senior citizens, we know that. You look at any state and they had a tremendous number of deaths in nursing homes,” he added. “It’s all a political charade, and it’s an ugly one frankly, to talk about a number of deaths and suggest there was politics added.”

The statement above is just false. But remember the Governor and his brother Chris Cuomo of CNN share the same brain. Perhaps on Monday, when he made the statement to MSNBC, it was Chris’s day to use their shared brain.

On March 25, 2020, Gov. Cuomo issued an order directing nursing homes to take in patients that already had the highly contagious coronavirus. “No resident shall be ­denied readmission or admission to NH solely based on a confirmed or suspected diagnosis of COVID-19,” then failed to reverse the directive for six weeks as deaths mounted.

Usually confirmed or suspected cases of the Wuhan Virus would have otherwise been sent to Hospitals. Thanks to the Cuomo order, those cases were sent to nursing homes and infected other patients, leading to a nursing home death toll approaching 6,000. First, he blamed the deaths on the old people themselves. Afterward, even though he independently gave the order, Cuomo says that President Trump made him do it. —another lie

It’s time for Cuomo to “man up” and take responsibility for his wrong decision.