THIS IS NUTS! Andrew Cuomo Given Award For His Pandemic ‘Leadership’ 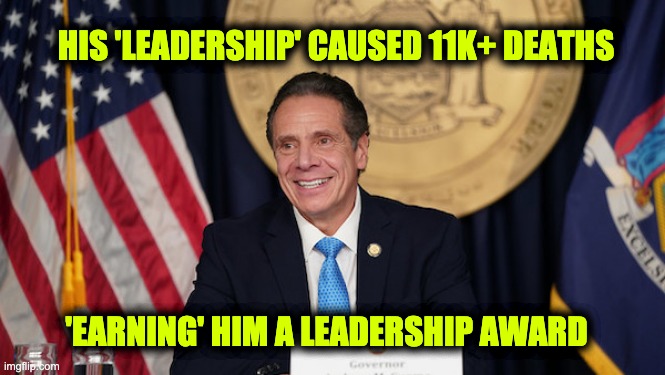 To earn the “Edward M. Kennedy Institute Award for Inspired Leadership,”  all you need to do is follow Teddy’s far-left ideology, enact a horrible policy that lead to thousands of senior citizen deaths of thousands, and deny any responsibility for the policy or its result. That’s how NY Governor Andrew Cuomo just received that award for his ‘leadership’ of the COVID-19 crisis.

The only appropriate part of awarding the person whose directive killed thousands of nursing home patients is that it’s named after someone who accidentally drove a car off the Chappaquiddick bridge, leaving his 28-year-old passenger Mary Jo Kopechne. Saved himself, fled the scene and waited hours to tell the local authorities.  At the same time, Ms. Kopechne struggled to breathe from the diminishing air pocket in the underwater car Kennedy left her in. She died from suffocation rather than from drowning.

Cuomo made a lousy decision. On March 25, 2020, New York Governor Andrew Cuomo ordered: “No resident shall be denied readmission or admission to a nursing home solely based on a confirmed or suspected diagnosis of COVID-19. Nursing homes are prohibited from requiring a hospitalized resident who is determined medically stable to be tested for COVID-19 before admission or readmission.” That order led to the COVID deaths of over 11K+ seniors. This Kennedy award-winning leader has refused to allow an investigation of the disaster, counts nursing home COVID deaths differently than other states, so we don’t really know who and how many nursing home deaths were a result of Coronavirus.

Instead of showing leadership and taking responsibility for his directive. The NY Governor blamed everyone except himself for the Nursing Home deaths. He’s blamed the nursing home patients themselves, President Trump, healthcare workers, the feds, and the fact that old people die.

How does that earn a leadership award for him to place next to the ridiculous Emmy he received for his China Virus briefings. Oh, wait, Cuomo said the virus didn’t come from China to the U.S. It came from Europe.

New York Governor Andrew Cuomo is now describing the coronavirus pandemic that originated in Wuhan, China as a "European virus."

He said this in today's presser multiple times.

Last month he lavished praise on the Chinese government for their efforts in combatting the virus. pic.twitter.com/fTSLFRVBqr

Does he deserve a leadership award? Ask Janice Dean, whose brave testimony about the loss of both of her in-laws, thanks to the Cuomo order, put a human face on the suffering for which Cuomo is being awarded.