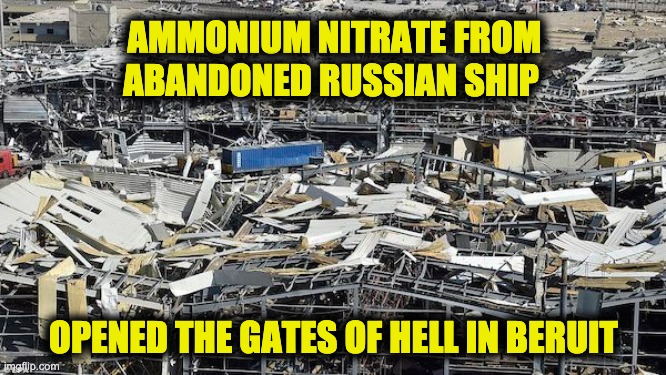 The scenes out of Lebanon this week have been both brutal and sickening. Lebanon’s government has blamed the massive blast on the detonation of 2,750 tonnes of ammonium nitrate stored at the city’s port. The ammonium nitrate that caused the horrible explosion that killed at least 135 people and injured 5,000 more was brought to Beirut by a  Russian ship docked in the city’s port for nearly seven years and stored in a port’s warehouse without appropriate security precautions.

The Russian vessel, named MV Rhosus, was carrying agricultural fertilizer.  Per the BBC

While sailing through the eastern Mediterranean the Rhosus suffered “technical problems” and was forced to dock at Beirut’s port, according to a 2015 report for industry newsletter Shippingarrested.com that was written by Lebanese lawyers who represented the crew.

The Rhosus was inspected by port officials and “forbidden from sailing”, the lawyers said. Most of the crew were repatriated, except for the Russian captain, Boris Prokoshev, and three others, who were reportedly Ukrainians.

Mr Prokoshev told Reuters news agency on Thursday that the Rhosus was leaking but seaworthy at the time, and that it was sent to Beirut by its owner to take on an additional cargo of heavy equipment because of financial difficulties.

However, the crew could not load the equipment safely, and when the ship’s owner failed to pay the port fees, the Lebanese authorities impounded it, he said.

A Lebanese judge allowed the crew to disembark, and in 2014 the Beirut Port authorities transferred the ammonium nitrate into “Warehouse 12”, next to the grain silos. The lawyers said the cargo was “awaiting auctioning and/or proper disposal”.

Since then, Lebanon’s director of customs, Badri Daher, repeatedly sent letters to the judiciary over the years and warned that the cargo was the equivalent of “a floating bomb,” but nothing was done

Daher repeatedly asked officials to remove the ammonium nitrate from the port because it posed a significant danger of exploding, he said during an interview with LBC TV late Wednesday.

Daher said flagging the risks to authorities was “extra work” for him and his predecessors outside of his responsibility to prevent smuggling and collecting duties.

He says it was the port authority’s job to monitor the material and store it appropriately. 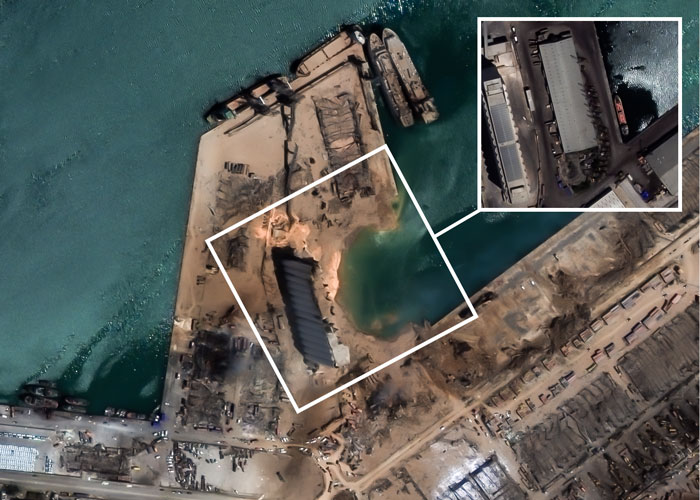 Lebanon President Michel Aoun promised on Wednesday that the investigation would be transparent and that those responsible will be punished.

The cabinet ordered an unspecified number of Beirut port officials put under house arrest pending an investigation into how ammonium nitrate came to be stored at the port for years. The government also declared a two-week state of emergency, effectively giving the military full powers during this time.

What about investigating why the government ignored the warnings?