Most Americans Are Worried Freedom of Speech Is In Danger 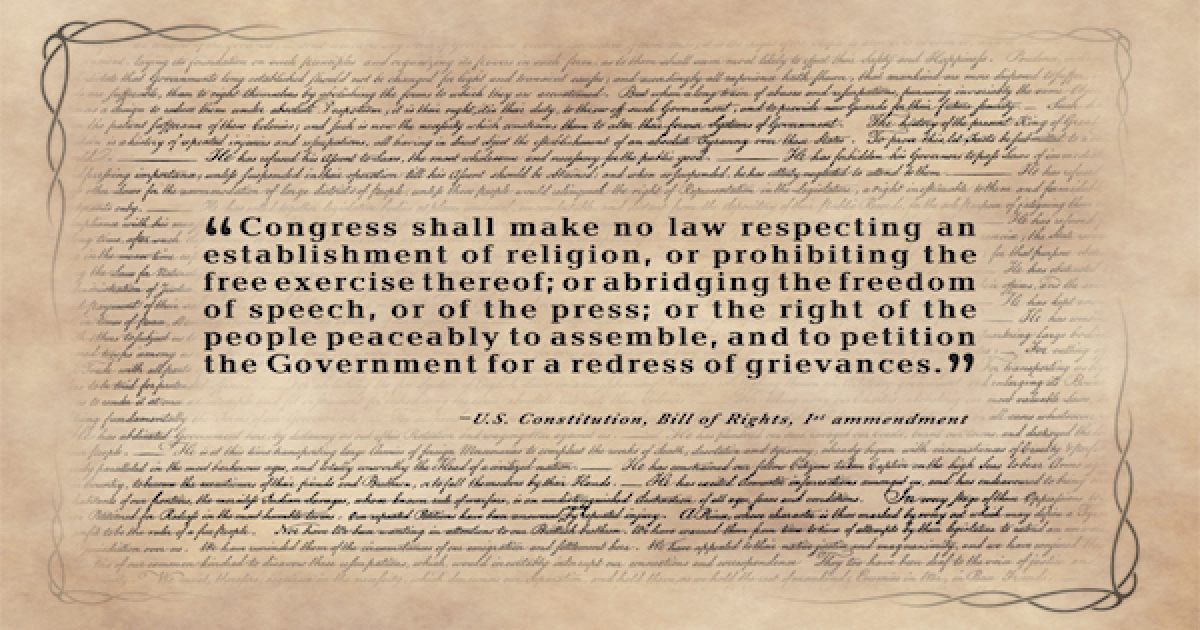 A heartening story is out today as the folks at Rasmussen Reports have just released the results to their latest poll which shows that most Americans are on the side of the angels when it comes to the battle for freedom of speech.

Most Americans today believe that the right to free speech is our most important, foundational right.

Voters rate freedom of speech as even more important than other basic constitutional rights such as religious freedom, freedom of the press and the right to bear arms.

Seventy-three percent (73%) agree with the famous line by the 18th-century French author Voltaire: “I disapprove of what you say but will defend to the death your right to say it.” Only 10% disagree with that statement, but 17% are undecided.

Among Americans who agree with Voltaire, 93% rate freedom of speech as more important than making sure no one is offended. That compares to just 69% of those who disagree with the French author’s maxim.

Only 8% of Americans think that not offending people is more important than defending free speech. To those people I have one simple message – LEAVE. There is no place in the United States of America for people who would sacrifice the freedom their neighbors enjoy in an effort to ensure that they don’t get offended by what others have to say.

While it might seem that the left has been aching to kill free speech in recent days, the poll suggests that those sentiments truly are just “fringe.”

According to Rasmussen the vast majority of Americans, no matter their partisan choice, support free speech… even when it’s offensive.

There is rare partisan agreement on freedom of speech. Most Americans regardless of political affiliation agree that they would defend someone’s right to say something even if they don’t agree with it, although Democrats are slightly less sure than Republicans and those not affiliated with either major party. The majority across the political spectrum also agree that free speech is more important than making sure no one’s offended.

Sadly, even though almost all of us agree about the importance of free speech, a growing number of Americans realize that speech in America today is not as free as it once was.

Just 28% of Americans believe they have true freedom of speech today, and most think the country is too politically correct.

How can we reverse the trend of growing political correctness which is crushing our right to speak freely? While many Trump voters saw his election as an opportunity to strike back against the PC police, there is still concern that Trump’s style has simply distracted us from the real fight to save the First Amendment.

44% of Americans said there is less freedom of speech on U.S. college campuses today than there has been in the past. Nearly half (47%) also believe most college administrators and professors are more interested in getting students to agree with certain politically correct points of view rather than in a free exchange of ideas.

And when it comes to free speech and current hot topics, most Americans overwhelmingly side with protecting speech as opposed to protecting feelings and not offending others.

When it comes to removing Confederate monuments and Civil War memorials, the VAST majority of Americans believe that we should learn from history and not attempt to erase it.

In May, just 19% of voters felt that the United States should erase symbols of its past history that are out of line with current sentiments.

Despite calls by some politicians and the media for erasing those connected to slavery from U.S. history, voters strongly believe it’s better to learn from the past than erase it.

Social media is another place where the overwhelming majority of Americans prefer more free speech than less.

Just 20% of Americans say it is better for owners of social media like Facebook and Twitter to regulate what is posted to make sure some people are not offended.

This is something that we should all agree on, because at the end of the day more freedom, not less means that each of us can live in line with our own personal beliefs without fear of persecution or government pressure. The only people who want less freedom, not more are those who believe they are better able to run your life than you are.

We call those people fascists… and today, they happen to mostly be on the Left.