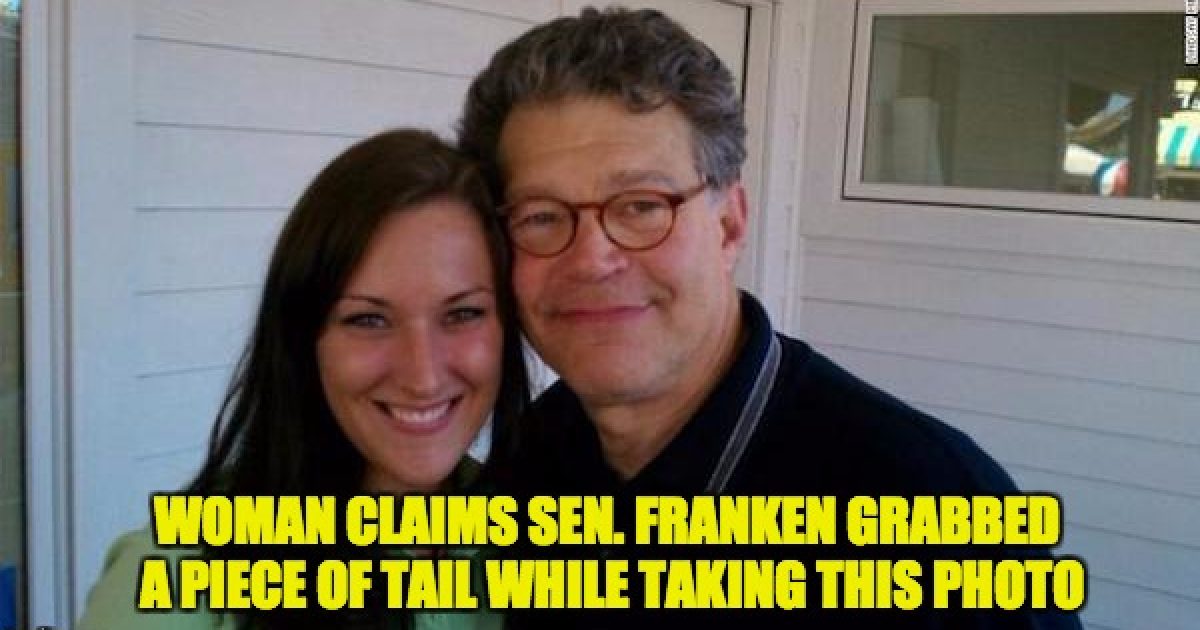 At the Minnesota State Fair in 2010 Lindsay Menz was hanging out in a local radio booth sponsored by her dad’s small business. Per CNN, she spent the day taking photos with various elected officials, political candidates, and celebrities who stopped by the booth. Eventually, Senator Al Franken walked in, Menz and her husband said they recognized him right away. Menz said she had a brief and friendly exchange with the senator.

Then, as her husband held up her phone and got ready to snap a photo of the two of them, Franken “pulled me in really close, like awkward close, and as my husband took the picture, he put his hand full-fledged on my rear,” Menz said. “It was wrapped tightly around my butt cheek.”
“It wasn’t around my waist. It wasn’t around my hip or side. It was definitely on my butt,” she said, recalling that the brazen act lasted three or four seconds. “I was like, oh my God, what’s happening.”
“He reached around her and kind of pulled her into him,” said her husband Jeremy Menz, who didn’t see what happened behind his wife. “He pulled her in and pushed his head against her head. It was over pretty quick.”
Lindsay Menz told CNN that she walked away as soon as the photo was taken, without saying anything to the then-first term senator. When she reconnected with her husband moments later, she told him: “He totally grabbed my butt.” Jeremy Menz described that conversation the same way to CNN.
In a statement to CNN Sunday, Franken said he did not remember taking the photo with Menz and that he felt “badly” that she felt disrespected.

Immediately after the incident, Ms. Menz told her husband, father, mother, and sister what happened.

Menz’s mother, Jodi Brown, also told CNN that she discussed the incident with her daughter immediately after it happened. She said she distinctly recalls her son-in-law saying to her: “Our senator just groped my wife right in front of me.”

She immediately posted the picture to Facebook, getting a comment from her sister, Cari Thunker, commented under the photo: “Sorry, but you two aren’t Bibles (sic) width apart.” Lindsay Menz
responded to her sister on Facebook, “Dude — Al Franken TOTALLY molested me! Creeper!”
Menz does not believe her incident is as bad as the one reported by Leeann Tweeden last week but it is an example of how the Minnesota Senator treats and thinks about women.
Facebook Twitter Flipboard