Against Age Discrimination In Politics 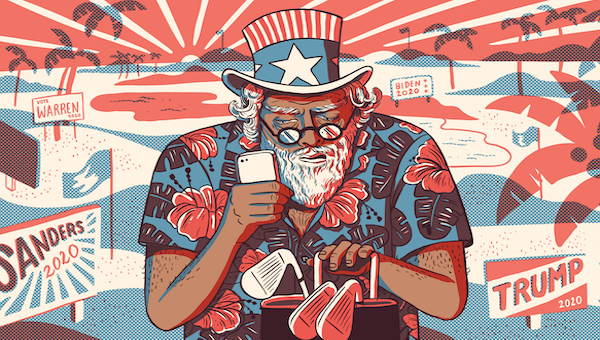 It should not take someone like me in his early 40s to notice, but a poll released by CBS last week found that nearly 75% of Americans — across party lines —  support age limits for elected officials.

Americans don’t agree much these days, but they somehow concur that discriminating against people over something they cannot control is a swell idea.

Of course, this is antithetical to living in a representative democracy, where you can vote for your preferred candidate, regardless of age, gender, race, or anything else.

Would this poll have looked differently just a few years ago? I believe so.

Perhaps the country would be better off if Govs. Ron Desantis, currently age 44, and Gavin Newsom, 54, battled for the presidency in 2024. But is that solely because Trump and Biden are senior citizens? It may be their divisive rhetoric and personalities, and in the case of Biden, his awful policies.  Many using “they’re too old” are using it as a lazy crutch.

And just because Biden’s cognitive ability and energy level are highly dubious, that doesn’t mean others his age are similar. Trump has control of his mental faculties and high energy, as does two-time presidential loser Bernie Sanders, even if he’s a dangerous totalitarian.

Let’s not forget that Queen Elizabeth died last week at 96 and remained lucid into her final days.

The importance of life experience and perspective should be clear and an attribute.

Meanwhile, a banal American actress, Jennifer Lawrence, recently expressed hatred for older people running for office in an interview with a fashion magazine. Engaging in a petty tirade about her “conservative family,” the millennial attacked Senate Minority Leader Mitch McConnell because he “was alive and well and thriving when schools were segregated.”
c

Of course, that’s an irrelevant point by an unserious person. McConnell is younger than Speaker Nancy Pelosi and Bernie  Sanders and just a few months older than Biden. Somehow Lawrence did not mention the latter three in her partisan rant.

“It’s an individual issue because some people at age 70 are already showing their age, when it comes to mental acuity, agility, passion, and then some have not even started to show these characteristics,” Toni Friedman, a retired YMCA senior program director, said. “So it’s hard to generalize. Every person ages differently based on many factors. I don’t think you can make a blanket age cutoff for people who want to seek public office.”

I agree. I simply want the person who best represents my beliefs. If he or she is only 38, like phenomenal U.S. Reps Mike Gallagher or Dan Crenshaw, that’s fine; and if he’s 89, like Iowa Sen. Chuck Grassley — physically and mentally sharp and on his way to another electoral win in November  — that’s fine too.

An arbitrary age cutoff to appease capricious folks who disliked the presidential options in 2016, 2020, and perhaps 2024 is anathema to the democratic process and will stop quality people from holding office and would be unconstitutional without a Constitutional amendment

Also against the Consitution if some rumored pograms were accomplished by executive order. While none of these have been decided by the President yet, there have been rumors about E/Os to allow packing the Supreme Court, adding new states, abolishing the Senate filibuster, making college “free,” or lowering the voting age.

None of these would be unconstitutional if Congress enacted and the President signed them. Still, the separation of powers described by the Constitution does NOT allow a POTUS to make laws.

That’s a rule for any President as long as they are older than 35; the minimum age for anyone to hold the office of President. Much to some of the people mentioned above, there is no maximum age for the Executive written in the Constitution.