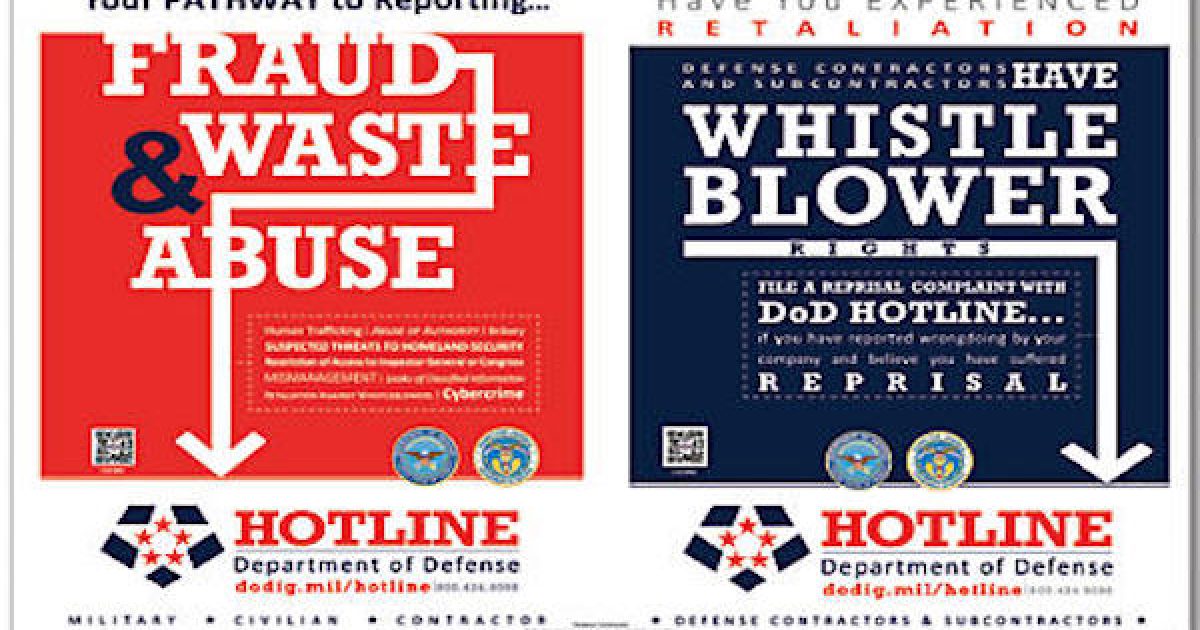 The Pentagon’s Inspector General has launched a preliminary investigation into charges that James H. Baker, the director of the Defense Department’s Office of Net Assessment (ONA), is retaliating against a whistleblower who warned of “rigged” contracts to outside consultants, The Daily Caller News Foundation has confirmed.

TheDCNF verified through two independent sources that the acting IG, Glenn A. Fine, initiated a formal “Whistleblower Reprisal Investigation” Sept. 28 to look into allegations that Baker unleashed various reprisals against Adam Lovinger, a senior ONA official. Lovinger warned about potential sweetheart deals to politically-connected outside contractors, including one with a woman Chelsea Clinton has referred to as her “best friend.”

Lovinger’s firing was initiated by the Defense Department but was used by Steve Bannon in his attempt to discredit Nat. Security Adviser Gen. HR McMaster

Baker is an Obama holdover appointed by Secretary Ashton Carter in May 2015, who remains the ONA director 11 months into the Trump administration.

Lovinger specifically protested $11.2 million in ONA contracts awarded over a decade to the Long-Term Strategic Group (LTSG), a company owned by Jacqueline Newmyer, a childhood friend of Chelsea Clinton. Clinton and Newmyer first met each other while attending Sidwell Friends School, an exclusive private Quaker school in the nation’s capital. They were in each other’s weddings, and in 2011 Chelsea referred to Newmyer as her “best friend.”

Lovinger’s attorney, Sean M. Bigley, accuses Baker of continuing the LTSG contract in the hopes it could help him in a Clinton presidency.

“We submit that Baker’s interest was his awareness of the LTSG-Clinton connection; his presumptive desire to exploit that to his advantage in the event of a Clinton election win; and the fact that contractors like LTSG served as a lucrative landing pad for ONA retirees,” Bigley charged in a Sept. 13 letter to Rear Admiral Kevin Sweeney, the chief of staff for Defense Secretary James Mattis.

The IG’s decision to launch a preliminary investigation occurred as former high-profile national security officials are beginning to publicly weigh in about Baker’s allegedly retaliatory actions.

Perle called Baker, “a shallow and manipulative character that should have gone with the change in administration.”

“He is a highly respected analyst across the board,” Kemp told TheDCNF. “The way he has been treated is deeply troubling.”

Lovinger, a GS-15 attorney and strategic foreign affairs analyst, successfully served at ONA for 12 years and each year received the highest possible “E” rating in his performance review. The “E” means “exceptional” performance.

But Baker poorly rated Lovinger in 2017, after he raised issues about the ONA’s reliance on outside contractors, especially LTSG.

ONA is a highly-classified think tank housed within the office of the Secretary of Defense. It conducts sensitive strategic research, especially for the Defense Secretary, and the office is supposed to serve as a model of performance.

For 44 years, ONA was led solely by one director, Andrew Marshall, who Lovinger alleges initially authorized many of the sweetheart deals with outside contractors. Marshall retired from ONA at the age of 93. Baker took the helm four months later.

IG Fine’s investigation into possible wrongdoing by Baker is being carried out by his “Investigations of Senior Officials Directorate.” That unit investigates “allegations of misconduct against the most senior DoD officers (three-star and above and equivalents), senior officials in the Joint or Defense Intelligence Community, and members of the Senior Executive Service,” according to the latest IG semi-annual report to Congress that is current as of March 31, 2017.

IG investigations under the Presidential Policy Directive-19 appear to be extremely rare.

From 2013 to 2017, only three cases were confirmed under PPD-19 among the 239 cases the IG “substantiated” across all the military services and civilian Defense Department employees, according to the IG’s semi-annual report.

Several IG investigators personally met with Lovinger for four and a half hours Oct. 5, examining the charges of how Baker retaliated against the analyst, according to Bigley. The original meeting was expected to last no more than three hours.

The IG office is formally attempting to determine if they need to intervene in the Baker case, according to a source with direct knowledge of the investigation. Fine’s office customarily does not provide any public information about the pace of IG investigations.

The first inkling of retaliation against Lovinger came Jan. 12, 2017, when Baker suddenly issued a series of charges against him. This was the same day that the National Security Council officially invited Lovinger to leave ONA and join the NSC as a senior director.

Lovinger entered the Trump White House on Inauguration Day but was dogged by Baker.

After Baker issued his latest set of allegations against Lovinger, the Washington Headquarters Services, a bureaucratic arm of the Pentagon, temporarily suspended Lovinger’s security clearance May 1 and removed him from his NSC post. Lovinger now works at a Defense Department annex where he currently is doing clerical work.

Baker dropped charges in two of the three of his initial investigations after they were challenged by Thomas Spencer, Lovinger’s first attorney.

Bigley said the allegations against his client are “demonstrably false” and called Baker “partisan and highly vindictive” in an interview with TheDCNF.

Baker has leveled four separate charges against Lovinger. The counts include an “unauthorized” trip to Israel, taking home unclassified academic papers to read, reading a classified document in an airplane, and having “unauthorized” contacts with the Indian government.

Baker’s accusation that the trip to Israel was “unauthorized” particularly rankles Lovinger.

Prior to the trip, Lovinger told TheDCNF that he notified ONA of an expected personal trip to Israel to commemorate his oldest son’s Bar Mitzvah. The Lovinger family traveled with Elisha Wiesel, son of legendary Holocaust survivor and Nobel Laureate Eli Wiesel. The Lovinger and Wiesel families have been very close, and Elisha is Lovinger’s oldest friend.

Lovinger told TheDCNF they only did “tourist stuff” and did not meet with a single Israeli official.

Another charge is that Lovinger conducted “unauthorized” contacts with the Indian government.

Lovinger’s 2017 performance review includes a statement from Secretary Carter, commending him for his work with the Indian government. “Two days prior to departing for the NSC, on January 18, 2017, the Secretary of Defense highlighted in an official letter Lovinger’s exceptional performance on collaborative net assessment with the Government of India,” the performance review states.

Nevertheless, in the same review, Baker rated Lovinger poorly. “I do not endorse the characterization set forth in the employee input (that) Adam performed successfully,” Baker said.

As for taking home papers, Baker sent an email to all ONA staff Nov. 1, 2016, in which he said, “Team-…acknowledging our cluttered workspace: we all read widely and have to as part of the job — all source, often all mixed together. Given the volume of reading, you may sometimes take reports and so forth home. (I certainly do).”

Lovinger did carry a document aboard an airplane during a Sept. 14, 2016, official trip. Anthony Russell, the ONA investigator of the incident, noted in an Oct. 18 memo for the record that the document “is marked without security markings in the header, but with ‘Classification Pending.’”

Russell concluded: “It is reasonable to conclude that there was no compromise given the content of the document in question and its close control either on Mr. Lovinger’s person or in his assigned lodging on a military base for a relatively short period of time. For these reasons, no violation is believed to have occurred.”

“He clearly was the target, for political reasons, in an effort to push him out of government,” Perle told TheDCNF of Lovinger. “And this was done consciously and deliberately. He’s a Trump loyalist, and it was launched and sustained by an Obama holdover.”

“This cries out for an investigation of Baker,” Perle added.

Kemp called the sidelining of Lovinger “a great loss.”

“He is very much a creative thinker and he’s not constrained by sort of narrow lines that affect so many people in government,” Kemp told TheDCNF.

“As I understand it, he questioned the actions of various organizations within the U.S. Government, particularly the Office of Net Assessment. And of course, these may not be always welcomed by one’s superiors,” Kemp told TheDCNF.

As for the use of outside contractors, Kemp said, “I’m aware they [ONA] did depend a lot on in the past on external contractors. It’s not necessarily a good thing.”

“To get rid of someone like that on what appeared to be questionable grounds is potentially problematic for the effectiveness of the U.S. intelligence organization,” Kemp added.

Robert Reilly, who served for 25 years in the national security field, including as a senior advisor to Secretary Donald Rumsfeld and as a White House special assistant to Reagan, told TheDCNF, “I’m very familiar with the use of investigations to politically destroy people.”

“That they would yank a top security clearance on what seemed to be unsubstantial grounds is shocking,” Reilly said.

In response to TheDCNF request for an interview with Baker or comments from ONA, Heather Babb, a public affairs officer who spoke on behalf of ONA stated in an email, “As a matter of policy, we do not comment on current investigations.”