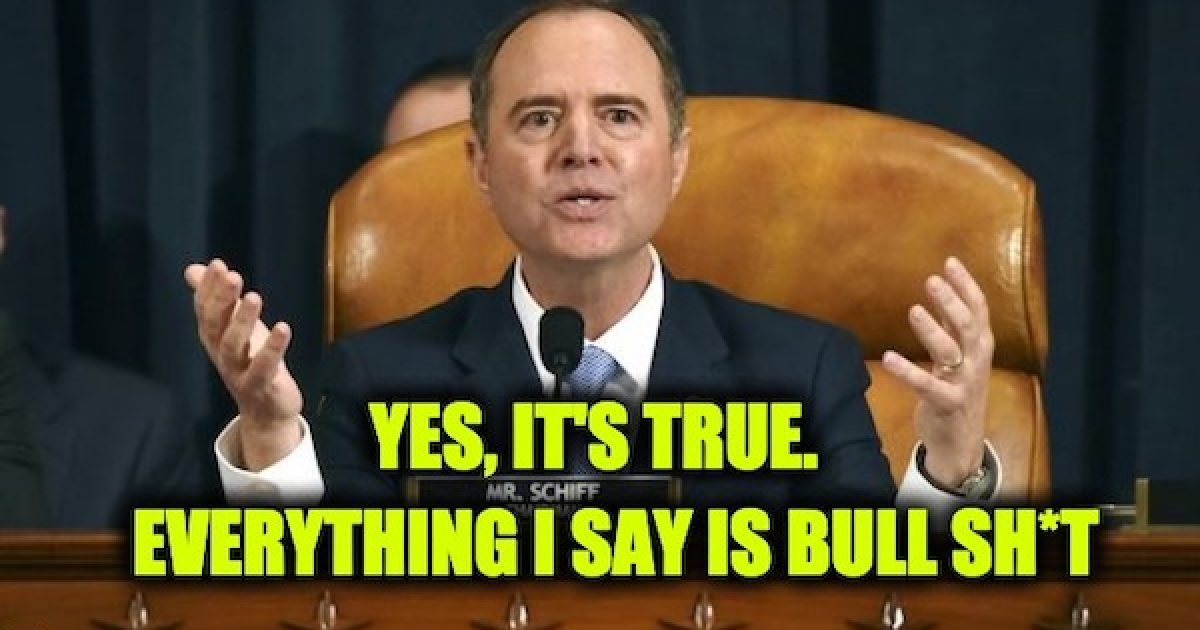 February 2018 saw Rep. Devin Nunes intelligence committee chairman release a four-page memo disclosing that the Carter Page FISA process that allowed the FBI to begin spying on the Trump Administration was abused. That the FBI had obtained surveillance warrants from the FISA court using the Steele Dossier as a significant part of that application, and the FBI never told the FISA court about Mr. Steele’s political and media ties.  Adam Schiff Is A LIAR

At the end of the same month, Adam Schiff, the ranking member, issued his own memo saying that the  FBI did not abuse the FISA process, withhold evidence from the FISA Court or subvert the process in any way. Schiff’s memo also claimed that “DOJ cited multiple sources to support the case for surveilling Page—but made only narrow use of information from Steele’s sources about Page’s specific activities in 2016″ The technical term for Schiff’s claim is bullsh*t!

The Horowitz report proved Nunes was telling the truth in his memo, and Adam Schiff’s memo was another example of Schiff lying to the American people.

The Horowitz tome explains that the FBI first considered surveilling Carter Page in Aug. 2016, but FBI lawyers rejected the action because there wasn’t enough probable cause. But a month later, in September, the FBI received the phony Steele dossier, which according to Horowitz, “played a central and essential role” in deciding to go to the court, and part of the application  “relied entirely” on “information from Steele Reports.” (pages 3-5 of the Horowitz report).

Schiff ‘s also lied when he claimed the Justice Department was truthful with the FISA court about “Steele’s prior relationship with the FBI.”

Page 364 of Horowitz report says the “source characterization statement asserting that Steele’s prior reporting had been “corroborated and used in criminal proceedings,” which overstated the significance of Steele’s past reporting and was not approved by Steele’s FBI handling agent, as required by the Woods Procedures”

Schiff claimed the FBI conducted a “rigorous process” to vet Steele’s allegations, and the Page FISA application explained the FBI’s reasonable basis for finding Steele credible. But Horowitz disagreed on Page 383 and 384 of his report.

Page contained in the election reporting and relied on in the FISA applications, and was only able to confirm the accuracy of a limited number of circumstantial facts,\ most of which were in the public domain, such as the dates that Page traveled to Russia, the timing of events, and the occupational positions of individuals referenced in the reports.

In addition to the lack of corroboration, we found that the FBI’s interviews of Steele, the Primary Sub-source, and a second sub-source, and other investigative activity revealed potentially serious problems with Steele’s description of information in his election reports.

None of this was told to the court.

The Steele report also contended that the Russians had evidence that while staying at the Ritz-Carlton in Moscow Trump hired a hooker to give him a “golden shower,” ignoring the fact that the POTUS is something of a germaphobe and would never do that with a stranger.  Page 188 of the Horowitz report explains the FBI knew the source who told Steele about the supposed incident was joking:

The Primary Sub-source explained that his/ her information came from “word of mouth and hearsay;” “conversation that [he/she] had with friends over beers; ” and that some of the information, such as allegations about Trump’s sexual activities, were statements he/she heard made in “jest.”

The Horowitz report proves that Adam Schiff, the man who is leading the effort to impeach President Trump, lied to America about the FISA report. The same way he is lying to America about President Trump and Ukraine.   Adam Schiff, is a Liar Will the MSM press him on his FISA lies? Will they ask why we should believe his Ukraine lies? Sadly the answer is probably no.