The ACU Creates A Push Back Against The U.S. Corporate Wokeism Threatening Our Liberty 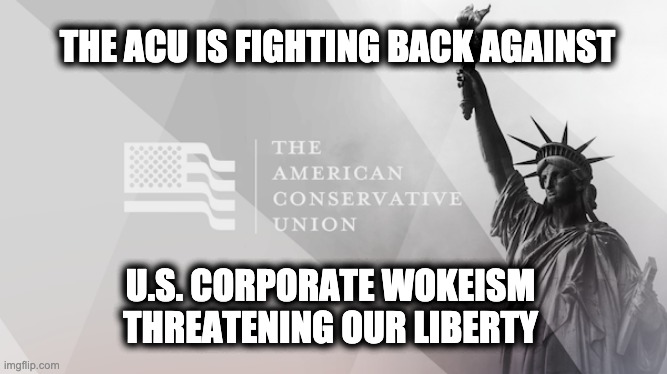 I will admit it–I am a big fan of the American Conservative Union (ACU). Not only because they run my favorite political event every year—CPAC, but because they are usually the first to recognize and act against the approaching threats to our freedoms.  Their latest action is typical of the way they fight for our liberty.  Anyone who has followed the news since Georgia passed their election integrity law, knows how major corporations have taken steps based on the false cancel culture claims about the bill.  ACU protecting liberty.

This isn’t the first time major corporations have used their resources to skew the political discourse toward policies that attack Americans’ freedoms nor will it be the last time. Recognizing those gathering anti-liberty clouds the ACU announced the establishment of The Center To Protect Voters and Their Voices.

On behalf of more than 100 million Americans, The American Conservative Union (ACU) is taking a stand against the increasingly divisive and partisan activism by public corporations and organizations that are caving to “woke” pressure. We will not stand by as half the country gets silenced, canceled, or shamed for resisting this pressure and choosing instead to value beliefs and traditions that are the bedrock of the greatest nation on earth.

ACU, America’s original conservative grassroots organization, has partnered with corporations and other center-right groups since 1964 to fight higher taxes, burdensome regulations and activist judges. We have worked alongside the business community to preserve free markets by limiting the government’s role in the private sector so for-profit businesses could flourish, provide jobs, and meet their primary goal of creating value for their shareholders.

But we are in a dangerous time today.

The unprecedented level of anti-Americanism, combined with radical leftist appeasement, makes it necessary for us to tell these activist corporations that their woke politics risk permanently severing the long-standing coalition for limited government between corporations and conservative activists. Some of today’s most prominent businesses that succumb to pressure from the elite media or radical political organizations are the very same ones that leaned on conservatives to help fight socialism in the past.

We have no issue with corporate leaders expressing their positions on cultural questions, but we draw the line when they abuse their power, attack the values of their customers and employees, and advocate for policies that weaken America. Make no mistake, corporations and their leaders should not disrespect the diverse views of their customers and employees by bowing down to the peer pressure from celebrities, prominent business associations, and the radical Left.

We have moved into dangerous territory where highly profitable companies can join forces to inject themselves into whatever social issue of the day is politically expedient, regardless of the impact on everyday Americans. Corporations have taken shortcuts and disingenuously accused election reformers of voter suppression and racism. But not only have they attacked voting rights and spread misinformation on the voting laws, they are also complicit in an unscientific and harmful assault on gender, unborn life, immigration, and energy policy, to name a few. When did we become a country where respectful disagreement is forbidden?

They have also maligned and silenced large percentages of their own customers and employees who feel differently. These individuals can no longer speak up to express their political, social or religious views because they are now at risk of being fired or publicly shamed.

We will be a voice for those who feel so powerless that they fear the consequences of speaking up.

We will expose the hypocrisy of corporate leaders who are publicly embracing and funding the Left while running companies that would cease to exist if the full extent of the Democrat’s leftist economic policies were implemented. We will demand that leaders of these corporations stop further dividing America by unquestioningly siding with the Left on every cultural or political dispute. Our goal is to encourage the CEOs and Directors of these companies to go back to running their businesses.

We will first demand meetings with CEO’s and board members of egregious corporations and other woke enterprises. If these companies rebuff us, they will suffer the consequences of losing the political support of millions who would gladly advocate for the policies that ensure their profitability. If these companies continue down this dangerous road of separating themselves from their advocates, we will take additional steps to highlight their support of woke politics.

This is a fight we never expected to have to wage against entities that usually have been allies in economic battles, but we will wage it with all of our resources and talents.

Thank you ACU, I will support you in this fight.ACU protecting liberty.