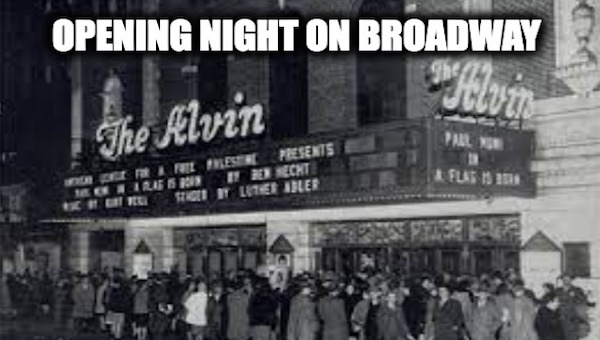 This year, Martin Luther King, Jr. Day will be commemorated just before the 75th anniversary of a remarkable but little-known campaign by American Zionists and African-Americans that helped defeat racial segregation in Baltimore. A Flag is Born

This story began in 1946 when the Zionist activists known as the Bergson Group sponsored a Broadway play called “A Flag is Born,” authored by the Academy Award-winning screenwriter and playwright Ben Hecht. Starring young Marlon Brando and Yiddish theater luminaries Paul Muni and Celia Adler, “Flag” depicted the plight of Holocaust survivors in postwar Europe and the fight for Jewish independence in British Mandatory Palestine.

The London Evening Standard expressed horror that large audiences were flocking to what it called “the most virulent anti-British play ever staged in the United States.” Many American publications took a different view: Time called the play “colorful theater and biting propaganda,” while Life complimented its “wit and wisdom.” 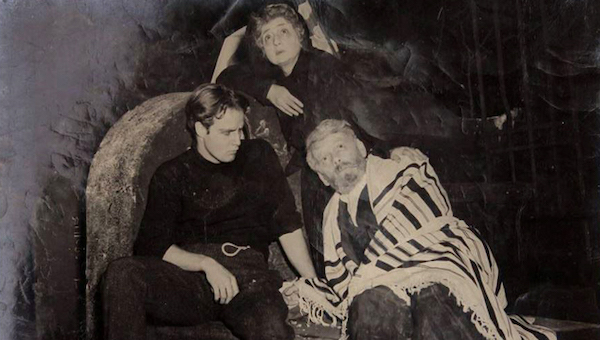 After a successful 10-week run on Broadway, “A Flag is Born” was scheduled to be performed in various cities, including the National Theater in Washington, D.C. But the National barred African-Americans, and Hecht and 32 other prominent playwrights had recently announced they would not permit their works to be staged in such theaters. Hence the Washington performance was rescheduled for the Maryland Theater in Baltimore.

But the controversy was not over. It turned out that while the Maryland Theater did not bar African-Americans, it did restrict them to the balcony, which bigots nicknamed “n—— heaven.” Alerted by local NAACP activists, the Bergson Group devised a good cop-bad cop strategy to confront the segregationists.

Just hours before the first curtain, Bergson officials informed the theater management that if the seating discrimination was not rescinded, the NAACP would picket the show with signs declaring, “There is No Difference Between Jim Crow in Maryland and Persecution [of Jews] in Palestine.” The Bergsonites also threatened to personally escort several African-Americans to the show as their guests, to be seated in the regular sections.

The pressure succeeded. The Maryland Theater management agreed to temporarily lease the theater to the Bergson Group. That made the theater’s ticket agents employees of the group and subject to whatever seating policy the activists chose to adopt. As a result, a dozen African-Americans attended the opening night performance on February 12, 1947, and “were seated indiscriminately, without untoward results,” the Baltimore Afro-American reported. February 12 is, fittingly, Abraham Lincoln’s birthday. 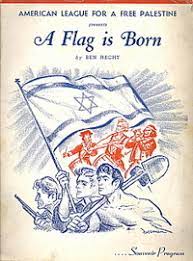 Exuberant NAACP leaders hailed the “tradition-shattering victory” over racism achieved by the alliance of black and Zionist activists. The NAACP used that victory as potent ammunition in its battles to desegregate other Baltimore theaters in the years to follow.

The Bergson Group used the proceeds from “A Flag is Born” to purchase a ship, renamed the S.S. Ben Hecht attempted to bring more than 600 Holocaust survivors from Europe to Palestine in the spring of 1947. The British navy intercepted the ship, and the passengers were taken to detention camps in Cyprus.

The British authorities decided to place the crew members, most of them American volunteers, in the Acre prison, in Palestine. That turned out to be a big mistake. The Ben Hecht crewmen mingled with imprisoned members of Menachem Begin’s Irgun Zvai Leumi underground militia. The Americans provided crucial assistance in the preparations by the Irgun members for a mass breakout. As dramatically portrayed in the film “Exodus,” more than 200 Jewish and Arab prisoners escaped in the international media as the most spectacular jailbreak of modern times.

Many previously unknown details about the voyage of the Ben Hecht are presented in a fascinating new book about one of the crew members, Without Permission: Conversations, Letters, and Memoirs of Henry Mandel (Cherry Orchard Books). Edited by Mandel’s grandson, Samuel Flaks, Without Permission is a timely reminder—so pertinent to the commemoration of Martin Luther King, Jr. Day—of the importance of taking action, even “without permission,” to combat injustice.

“I am proud that it was my play which terminated one of the most disgraceful practices of our country’s history,” a beaming Ben Hecht declared after the opening performance in Baltimore. “For the first time in the history of the State of Maryland, Negroes were permitted to attend the legitimate theatre without discrimination. I am proud that it was ‘A Flag is Born’ which they attended without insult. Breaking down this vicious and indecent tradition in Maryland is worthy of the high purpose for which ‘Flag’ was conceived and written. The incident is forceful testimony to the proposition that to fight discrimination and injustice to one group of human beings affords protection to every other group.”

Jeff note: Zionists saw the battle for racial civil rights in America as a “sister” movement to the Jews’ civil rights struggle for a return to their eternal homeland. That’s one reason why Jews, especially Zionists, were early and strong partners for the equality of Black Americans.

Dr. Medoff is director of The David S. Wyman Institute for Holocaust Studies, in Washington, D.C.  www.WymanInstitute.org and the author of over 20  books about Jewish History and the Holocaust.

Jeff Dunetz (The Lid) is on the national board of Herut, an international movement for Zionist pride and education dedicated to the ideals of the late Zionist leader Ze’ev Jabotinsky. Many of the people involved in the Bergson Group were followers of Jabotinsky and the Revisionist \ Zionist movement. More about Herut can be found at www.HerutNA.org–Please consider clicking here and join me as a member of Herut.