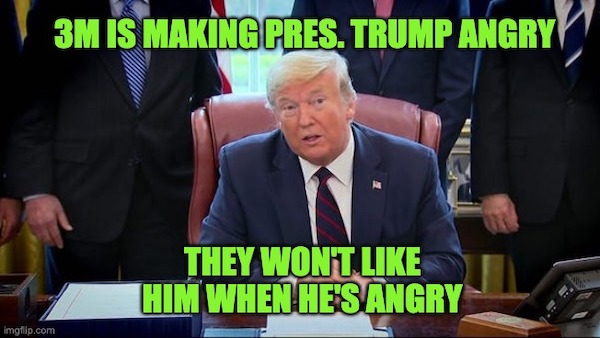 On Thursday night, President Trump issued an executive order (EO) to 3M under the Defense Production Act (DPA).  The EO directs acting Homeland Security Secretary “through the Administrator of the Federal Emergency Management Agency (Administrator), shall use any and all authority available under the Act to acquire, from any appropriate subsidiary or affiliate of 3M Company, the number of N-95 respirators that the Administrator determines to be appropriate.”

After issuing the EO, he blasted the company on Twitter:

President Trump has been one of the biggest cheerleaders for private businesses stepping up and being the difference-makers in this Chinese Coronavirus crisis. So why did he go off on 3M? If two words could best sum up the ‘Trump Doctrine’ of leading the country, it would be his own phrase ‘America First.’ His critics over-think it by assuming this must mean he has ill-will toward foreigners. But that’s overthinking it. We see the very same dynamic play out in families.

Most of us would sacrifice nearly anything to help our kids. Are our kids somehow ‘better’ than the neighbor’s kid, or that we would curb stomp them in the street? Of course not. No. We respond differently to them because our RELATIONSHIP to our kids is more prized than our relationship to some stranger’s kid. As it should be.

This is something that globalists have entirely lost sight of.

Trump heard that 3M was working at cross purposes to the well-being of American citizens — even endangering American lives. And he got pissed off at them.

What were they doing that set him off?

They were ‘bumping down’ the priority of State-level American purchases of N95 masks — including official State purchasing agents from places like Florida that are facing a crisis.

Why is @3M selling masks to foreign governments instead of to Americans during a Pandemic?

Hospitals “can’t get this life-saving PPE because a company decided to make a Globalist decision and not put America First.”

Thank you @JaredEMoskowitz for exposing this. pic.twitter.com/T3L0UzP8md

It’s one thing to point fingers at politicians and blame them.

It’s quite another to identify the places where we are losing needed hospital supplies to foreign markets even AFTER the orders have been placed and paid for by U.S. governments.

The private market for respirator masks, collection swabs, hand sanitizer and other supplies critical for front line workers has become a profit-driven frontier where bidding wars drive up prices, orders are promised but never delivered and vendors are not always who they appear to be, according to interviews and statements by Florida government officials and hospital executives.

“It’s shady as hell, that’s for sure,” Gov. Ron DeSantis said Thursday during a news conference in his Tallahassee office.

Though Florida has received shipments of masks from the federal government in recent weeks, DeSantis said he is frustrated by the state’s experience buying masks on the private market only to find out the supplies never arrived. — MiamiHerald

Part of the reason for the 3M mask issues is that some of their manufacturing is done in China, which won’t allow the masks to be exported. However, it did say on Friday, “earlier this week, we secured approval from China to export to the U.S. 10 million N95 respirators manufactured by 3M in China.”

But 3M is exporting some of the masks made in the United States to Canada and Latin American countries, but the company claims if they stopped those exports, net masks in the U.S. would fall:

The Administration also requested that 3M cease exporting respirators that we currently manufacture in the United States to the Canadian and Latin American markets. There are, however, significant humanitarian implications of ceasing respirator supplies to healthcare workers in Canada and Latin America, where we are a critical supplier of respirators. In addition, ceasing all export of respirators produced in the United States would likely cause other countries to retaliate and do the same, as some have already done. If that were to occur, the net number of respirators being made available to the United States would actually decrease. That is the opposite of what we and the Administration, on behalf of the American people, both seek.

In the end, the newly chastised 3M has promised to work with the administration to implement the order.

We also continue to act on reports of price gouging and unauthorized reselling related to 3M respirators. This activity is unethical and illegal. We are working with the U.S. Attorney General and attorneys general of every state, making it clear that 3M has not and will not raise prices for respirators and offering our assistance in the fight.

We look forward to working closely with the Administration to implement yesterday’s DPA order. We will continue to maximize the amount of respirators we can produce on behalf of U.S. healthcare workers, as we have every single day since this crisis began.

3M has been working with the administration for weeks, did Trump just hear about their exports? I doubt it.  IMHO the President issued the DPA executive order to help 3M. The company can now tell China “the president ordered us to send more masks to the U.S..” and negotiate with Canada and the Latin American companies to lower their orders for the same reason. In fact, the company can tell them to take it up with Trump.