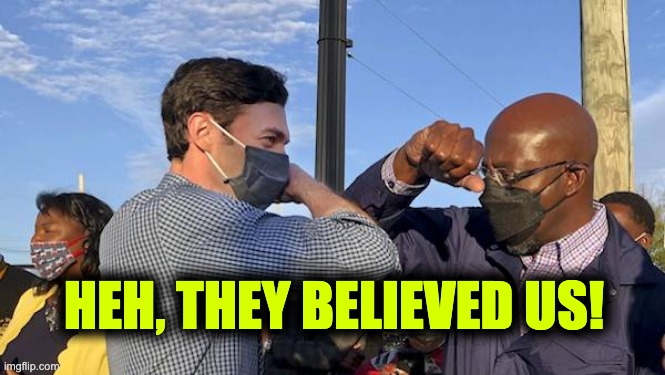 In the final days of Georgia’s senate runoff election, it appeared as though the Democrats may have had a real shot at winning both of the races up for grabs.  All they needed was something to put them over the top, to really seal the deal. This is when some bright political strategist began reminding Georgia voters that a Democratic majority in the Senate could help to usher in a number of proposals previously blocked by Republicans.  This included the ever-elusive $2K stimulus checks that Donald Trump, Nancy Pelosi, and pretty much everyone except for Mitch McConnell seemed to be in favor of.

But now that we’ve received the much-belittled $600 direct payment, the ongoing negotiations seem to be focused around a supplemental payment of $1,400 – and that’s not sitting well with some Georgia voters. They were told that they would be getting an additional $2k not $2k minus the $600 already issued.

Georgia Democrats have reportedly already begun fuming over their two new senators, the Rev. Raphael Warnock and Jon Ossoff, who were sworn in Wednesday by Vice President Kamala Harris, according to a new report.

Both men narrowly won hard-fought races against Republican incumbents in the Peach State, winning control of the Senate for the Democrats in the process.

But a major issue raised by critics is that President Biden espoused a coronavirus relief plan that would send $1,400 checks to many Americans – while Warnock and Ossoff campaigned on a $2,000 promise.

“Warnock and Ossoff made it a point to endorse and exclusively say ‘$2,000 checks,’” Georgia Democrat Oscar Zaro told Mediaite. “A lot of the people in my district voted blue in the runoff for two main reasons. One: Loeffler and Perdue denying us relief during COVID while profiting millions themselves; and two, $2,000 checks.”

And Zaro wasn’t the only one.

Rogelio Linares, a Democratic canvasser during the runoff elections, told Mediaite that he feels “like s—” over the issue and called it “a betrayal of the working class.

“I was lying to people that were relying on this,” he said. “At the time I didn’t know it was a lie. But that was not the reality.”

Another Peach State voter, Justin Wade, told the outlet the $1,400 checks are “a bad sign” and noted that Democrats and supportive PACs had dumped record-breaking totals on campaign spending into the state in their effort to win the Senate — only to immediately back away from the $2,000 total.

Georgia may have surprised many by going blue this year, but we’ll have to see how long the Peach State will remain that way.