The 2020 Election Wasn’t Stolen —It Was Bought And Paid For By Mark Zuckerberg. 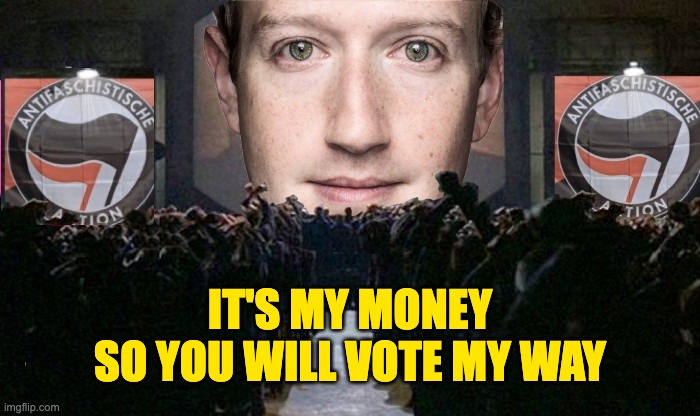 An investigation by the Caesar Rodney Election Research Institute and published in the NY Post has revealed Facebook CEO Mark Zuckerberg spent 419.5 million dollars to make Joe Biden president in the 2020 election. The inventor of the world’s largest social media platform didn’t give the money to the Biden campaign. He found a much more creative method. Zuckerberg donated to nonprofits that helped build the 2020 election infrastructure in counties that strongly leaned toward Democrats. Zuckerberg millions swayed 2020 election

Analysis conducted by our team demonstrates this money significantly increased Joe Biden’s vote margin in key swing states. In places like Georgia, where Biden won by 12,000 votes, and Arizona, where he won by 10,000, the spending likely put him over the top.

The two nonprofits getting the Zuckerberg money were, The Center for Technology and Civic Life (CTCL) and The Center for Election Innovation and Research (CEIR). Per the Post, like most political-related donations, the money was given with specific conditions. “Every CTCL and CEIR grant spelled out in great detail the conditions under which the grant money was to be used.”

For instance, CTCL/CEIR funded self-described “vote navigators” in Wisconsin. They assisted voters, “potentially at their front doors, to answer questions, assist in ballot curing … and witness absentee ballot signatures.” A temporary staffing agency affiliated with Stacey Abrams called Happy Faces helped by counting the votes amid the election-night chaos in Fulton County, Georgia. I suppose what made their faces happy was getting rid of the “bad orange man.”

Other uses of the Zuckerberg money was demanding “the promotion of universal mail-in voting through suspending election laws, extending deadlines that favored mail-in over in-person voting, greatly expanding opportunities for ‘ballot curing’ expensive bulk mailings, and other lavish “community outreach” programs that were directed by private activists.”

They were precise as to the geography where the money was to be spent.  For example, “CTCL boosted resources in Green Bay, a Democrat-heavy area, to $47 per voter, while rural counties typically stayed at the $4 mark.”

On the one hand, Zuckerberg’s strategy should receive kudos for creativity. It even used the same conservative principles as used in Operation Warpspeed to help the Democrats. Think about it —they came up with a public/private partnership to swing the election.  But elections should be unbiased and purely public.  Zuckerberg’s creative strategy should frighten any American who believes in free and fair elections and the concept of one man, one vote.

More analysis of the data is needed, but the initial results are that the Zuckerberg strategy worked. “The injection of structural bias into the 2020 election, and our analysis shows it likely generated enough additional votes for Biden to secure an Electoral College victory in 2020.”

Our preliminary results in Georgia and Wisconsin suggest a similar impact on Biden’s vote margin from CTCL spending. And spending in those states was likely large enough and targeted enough to have shifted them into Biden’s column.

This research and analysis project will culminate in the creation of a counterfactual electoral map based on the combined results of our state-by-state analysis. It will reflect how the election results would have looked after the last legal ballot was counted if CTCL and CEIR did not spend their $419.5 million in 2020.

We have good reason to anticipate that the results of our work will show that CTCL and CEIR involvement in the 2020 election gave rise to an election that, while free, was not fair.

In the end, the research will say that the 2020 election wasn’t stolen. It was bought and paid for by Mark Zuckerberg.