Zuckerberg Did The Same Thing Across The U.S. 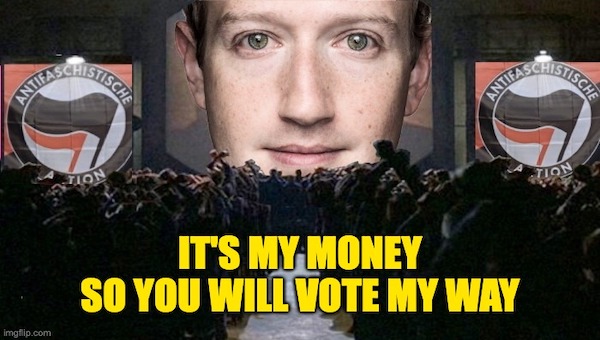 As we revealed in October 2021, an investigation by the Caesar Rodney Election Research Institute and published in the NY Post revealed that Facebook CEO Mark Zuckerberg spent 419.5 million dollars to make Joe Biden president in the 2020 election. The inventor of the world’s largest social media platform didn’t give the money to the Biden campaign. He found a much more creative method. Zuckerberg donated to nonprofits that helped build the 2020 election infrastructure in counties that strongly leaned toward Democrats. Zuckerberg’s millions swayed the 2020 election.

Wisconsin special counsel Michael Gableman has found that $9 million of those dollars was due to Mark Zuckerberg pumping into the Wisconsin election in 2020 broke the state’s bribery laws.

Last August, former state Supreme Court justice Michael Gableman was appointed to look into Zuckerberg’s spending, millions that “somehow” accidentally only got spent in the left-wing, Democrat-controlled areas of the state.

According to The Federalist:

From the details exposed in Monday’s special counsel report, the state legislature has much work to do to address “the numerous questionable and unlawful actions of various actors in the 2020 election.” The first unlawful action, according to the report, concerned the payment of grant funds to five Wisconsin counties that were used to facilitate voting. That arrangement, Gableman wrote, violated Wis. Stat. § 12.11, which prohibits election bribery by providing it is illegal to offer anything of value to or for any person in order to induce any elector to go to the polls or vote.

According to the report, Priscilla Chan and Mark Zuckerberg providing financing that allowed the Center for Tech and Civic Life to offer nearly $9 million in “Zuck Bucks” to Milwaukee, Madison, Racine, Kenosha and Green Bay counties. In exchange, the “Zuckerberg 5,” as the report called the counties, in effect, operated Democratic get-out-the-vote efforts. Those grant funds then paid for illegal drop boxes to be placed in Democratic voting strongholds.

The illegal use of drop boxes represented a second area of concern to the special counsel’s office. The report notes state election code limits the manner in which ballots may be cast, providing that an elector must personally mail or deliver his or her ballot to the municipal clerk, except where the law authorizes an agent to act on the behalf of the voter.

“The Zuckerberg 5 also violated the federal and state constitutional guarantee of equal protection,” Gableman found because the Zuckerberg program went way beyond Wisconsin.

The Zuckerberg money wasn’t limited to Wisconsin. Throughout the country, he was demanding “the promotion of universal mail-in voting through suspending election laws, extending deadlines that favored mail-in over in-person voting, greatly expanding opportunities for ‘ballot curing’ expensive bulk mailings, and other lavish “community outreach” programs that were directed by private activists.”

In the end, Michael Gableman’s research in Wisconsin says the 2020 election wasn’t stolen. It was bought and paid for by Mark Zuckerberg.

To protect future elections, Zuckerberg’s donations and others like it must be examined nationally before November 2024.