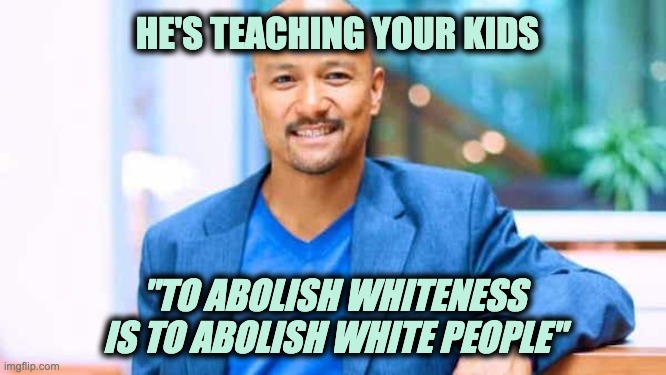 UC Berkeley Professor Zeus Leonardo believes in Critical Race Theory. In so doing, he made the statement to a class that “to abolish whiteness is to abolish white people.” Is he advocating genocide?

“To abolish whiteness is to abolish white people. That’s very uncomfortable perhaps, but it asks about our definitions of what race is and what racial justice might mean.”

And yes, this is absolutely critical race theory. pic.twitter.com/meKjDQDrMi

Confusion and deception abound in our universities from so-called “educators” like this. Leonardo is an education professor – he teaches students who will go on to teach your children. He studies “ideologies and discourses in education with respect to structural relations of power. Much of his work is interdisciplinary and draws insights from sociology, contemporary philosophy, and cultural studies. In particular, he engages critical theories to inform his analysis of the relationship between schooling and social relations, such as race, class, culture, and gender. His research is informed by the premise that educational knowledge should promote the democratization of schools and society.”

Many universities now have ‘Diversity Inclusion Equity’ classes read that Critical Race Theory. Yet they are not in any way “inclusive.” The opposite is true – the agenda is to abolish any of the thoughts of white people and force them into thinking like they do. It’s why we see white folks standing with the openly Marxist Black Lives Matter. It’s why there are white students with clenched fists attacking people innocently having lunch at a restaurant or shouting down a white speaker at a conservative event. They have been brainwashed into thinking they are accepted. Dr. Leonardo just proved them wrong: they are still considered the enemy to be abolished.

Turning Point USA wrote about Zeus in their The Professor Watchlist.

Students are not being taught how to think for themselves, they are being drawn into narratives that promote dangerous group-think. Dr. Leonardo has a premise that doesn’t promote unity or harmony between races… it promotes hate. He believes that racism is systemic, and that white people are born human but white parents “abuse them into becoming white.”

Recommended reading from the professor of education at Berkeley includes concepts such as “white people are not born white”.

White people are “born human” and then “white parents physically and psychologically ABUSE them” into becoming “white people”. pic.twitter.com/GOtjrFCC7m

Dr. Leonardo wants to solve the “problem of whiteness” or pose it as a problem. The real problem is that people have begun to see others as impediments to their ability to move forward in life. It actually foments racism, division, and anger. It teaches victimhood by always having someone to blame because of the color of their skin.