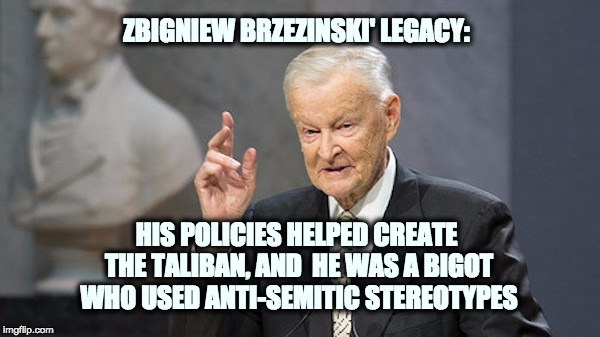 Zbigniew Brzezinski passed away two weeks ago. Unlike the obituaries published after his death, It is time to the truth about the anti-Semitic Brzezinski whose mistakes brought us the war on terror and possibly more.

The obituaries published about his career were demonstrably false. As national security advisor for Jimmy Carter,  Zbigniew Brzezinski was a failure whose policies brought us the War on Terror by luring the Soviet Union to invade Afghanistan and creating both the Taliban and al Qaeda. He was also a bigot who traded in anti-Semitic stereotypes, and who hated Israel.

During Brzezinski’s tenure, Jimmy Carter forced the Shah of Iran to abdicate which led to the radical Iran we have today, Carter also forced out the democratically elected Bishop Muzorewa in Zimbabwe leading to the almost 40-year despotic reign of Robert Mugabe. Although as National Security Advisor he was most assuredly involved in the policy decisions,  Zbigniew Brzezinski explicit fingerprints could only be found on his failed plan to hurt the Soviet Union, which led to the war on terror.

US aid to the mujahideen Islamic insurgency in Afghanistan started, six months before the Soviets invaded Afghanistan with the intention of making it more likely for the USSR to attack Afghanistan to support its puppet government. Brzezinski admitted as much in a 1998 interview:

According to the official version of history, CIA aid to the Mujahadeen began during 1980, that is to say, after the Soviet army invaded Afghanistan, 24 Dec 1979. But the reality, secretly guarded until now, is completely otherwise. That secret operation was an excellent idea. It had the effect of drawing the Soviets into the Afghan trap…. The day that the Soviets officially crossed the border, I wrote to President Carter “We now have the opportunity of giving to the Soviet Union its Vietnam War.”

Brzezinski got his wish, and once the Soviets invaded he sprung into action.

We immediately launched a twofold process when we heard that the Soviets had entered Afghanistan. The first involved direct reactions and sanctions focused on the Soviet Union, and both the State Department and the National Security Council prepared long lists of sanctions to be adopted, of steps to be taken to increase the international costs to the Soviet Union of their actions. And the second course of action led to my going to Pakistan a month or so after the Soviet invasion of Afghanistan, for the purpose of coordinating with the Pakistanis a joint response, the purpose of which would be to make the Soviets bleed for as much and as long as is possible; and we engaged in that effort in a collaborative sense with the Saudis, the Egyptians, the British, the Chinese, and we started providing weapons to the Mujaheddin, from various sources again – for example, some Soviet arms from the Egyptians and the Chinese. We even got Soviet arms from the Czechoslovak communist government, since it was obviously susceptible to material incentives; and at some point we started buying arms for the Mujaheddin from the Soviet army in Afghanistan, because that army was increasingly corrupt.

The unexpected result of his policy was the creation of the Taliban its alliance with al Qaeda. After the Soviets withdrew, the mujahideen who got their initial financing during the Carter Administration thanks to Brzezinski  began to fight each other for power. After several years of civil war, a new armed force began with the backing of Pakistan. Known as the Taliban, this radical group entered the fray. By 1996, with backing from the Pakistani ISI, the Military of Pakistan, and al-Qaeda, the Taliban had controlled most of the country. At the same time, in May 1996 Sudan, which had been the home of al Qaeda, told bin Laden would never be welcome to return, therefore the Taliban offered bin Laden the opportunity to re-locate its headquarters to Afghanistan. Al-Qaeda enjoyed the Taliban’s protection and build up its network from there.

In that same 1998 interview referred to above, Brzezinski recognized that his policies brought about the Taliban and said it was worth it.

What is most important to the history of the world? The Taliban or the collapse of the Soviet empire? Some stirred-up Moslems or the liberation of Central Europe and the end of the cold war?

Except the Soviet Empire collapse was caused by President Reagan’s re-arming the US military. The USSR tried to match America’s military spending which caused a scarcity of consumer goods, and the citizens of Soviet States wanting out.

In the domestic area Zbigniew Brzezinski has displayed a disdain for the Jewish people using anti-Semitic stereotypes. He’s accused members of the American Jewish establishment of “McCarthyism” in its attitude towards critics of Israel. “It’s not unique to the Jewish community — but there is a McCarthy-ite tendency among some people in the Jewish community,” Adding that pro-Israel lobby in the US is too powerful, while the slur of anti-Semitism is too readily used whenever its power is called into question. Brzezinski accused the American Israel Public Affairs Committee (AIPAC) — the largest and most influential lobby group — of obstructing peace efforts. He said: “AIPAC has consistently opposed a two-state solution and a lot of members of Congress have been intimidated and I don’t think that’s healthy.”

A longtime foe of Israel’s partisans in the United States, he says the Obama team “fumbled by getting outmaneuvered by the Israelis.” Then he gets blunter: “Domestic politics interceded: The Israelis have a lot of influence with Congress, and in some cases they are able to buy influence.”

The former national security adviser is an anti-Semite, not because he is anti-Israel, that just qualifies him to be a liberal Democrat.  It is Brzezinski’s use of anti-Semitic memes such as “the Jews control foreign policy,” that proves him to be an anti-Semite.

Brzezinski, has another nasty habit, he does not believe that Jews have any right to defend themselves.  He criticized Israel attacks on Hamas as being unwarranted because the Kassams the terrorists were launching were simply a nuisance. He suggested to President Bush to blow Israeli airplanes out of the sky if they dare to launch an attack on the Iranian nukes.

Zbigniew Brzezinski’s death two weeks ago caused heartbreak in his family, and I do pray that God comforts his mourners. But it is important to point out that he failed as a National Security Adviser, that his mistakes brought us the war on terror, and that he was a bigot who promoted Antisemitism through his use of anti-Semitic stereotypes.