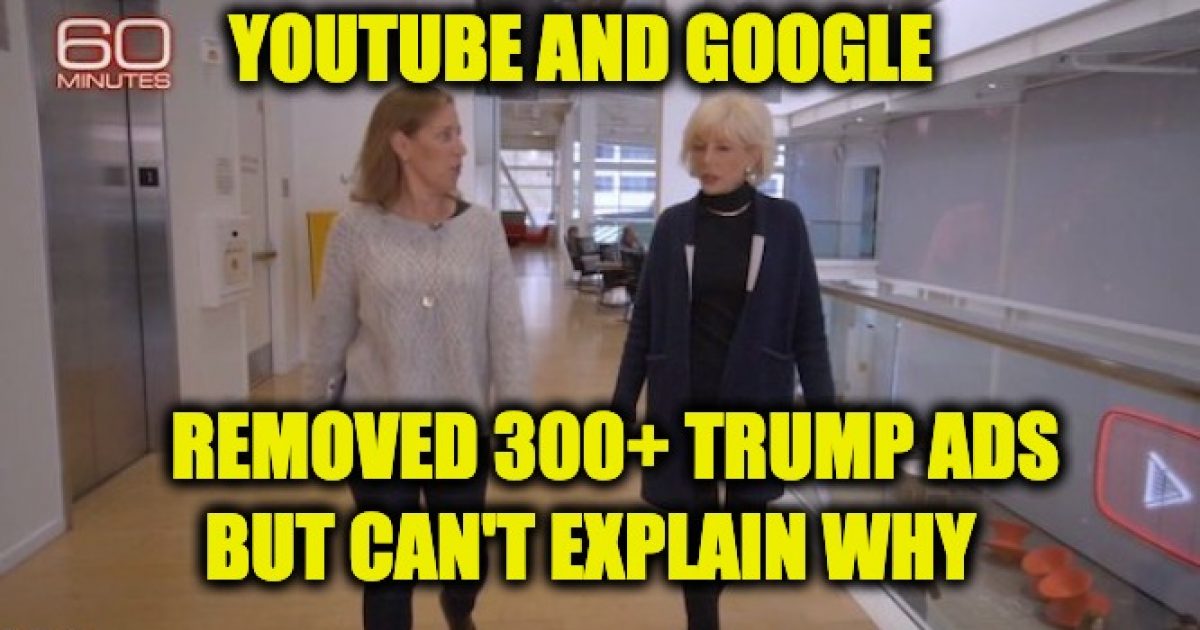 Over 300 Trump campaign ads were removed from Google and YouTube over the summer for “violating policies.” In an interview with Leslie Stahl from 60 Minutes, YouTube CEO Susan Wojcicki stated that the reason they were taken down had to do with “technically manipulated” content, not the political message. But Ms. Wojcicki couldn’t explain what “technically manipulated” content meant. She told Leslie Stahl where to look it up, but that resource didn’t explain why the ads weren’t removed either. rump ads.

When pressed during a sit-down interview on whether Trump ads had been removed, YouTube CEO Susan Wojcicki said that there were “ads of President Trump that were not approved to run on Google or YouTube.”

She told longtime “60 Minutes” correspondent Lesley Stahl that the ads are “available in our transparency report.”…

“Facebook is facing a lot of controversy because it refuses to take down a President Trump ad about Biden which is not true. Would you run that ad?” correspondent Lesley Stahl asked Wojcicki.

“So that is an ad that right now would not be a violation of our policies,” Wojcicki responded.

“For every single video, I think it’s really important to look at it,” Wojcicki responded. “Politicians are always accusing their opponents of lying. That said, it’s not OK to have technically manipulated content that would be misleading.”

Wojcicki claimed that leftists are also complaining of censorship by social media, and that the systems and algorithms used by them have no political bias built into the “in any way.” She stated that the software has no idea whether something is Republican or Democrat, but whether it’s “technically manipulated.” Wojcicki did not explain what she means by technically manipulated or give an example of what she means.

As suggested by Wojckcki, 60 Minutes took a look at the “transparency report.” They found the report wasn’t very transparent.

60 Minutes reviewed the archive to learn more about President Trump’s problematic political ads. We found that over 300 video ads were taken down by Google and YouTube, mostly over the summer, for violating company policy. But the archive doesn’t detail what policy was violated. Was it a copyright violation? A lie or extreme inaccuracy? Faulty grammar? Bad punctuation? It’s unclear. The ads determined to be offending are not available to be screened. We found very little transparency in the transparency report.

I would be very interested to know what Democratic ads were removed because I believe she’s lying.

It appears that YouTube is attempting to play referee or policeman in regard to US elections. Is that in and of itself manipulation of an election?