Yom HaShoah Holocaust Remembrance: How Eisenhower Assured The Horrors Would Never Be Forgotten 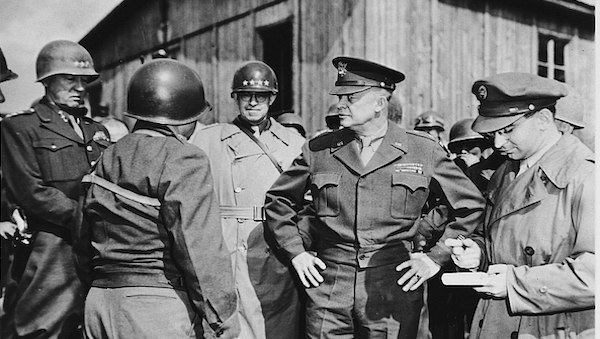 April 7 at sunset through the next day at sundown is a very solemn day on the Jewish calendar, Yom HaShoah, Holocaust Remembrance Day.  Its full name is  Yom HaZikaron laShoah ve-laG’vurah יום הזיכרון לשואה ולגבורה; which in English translates to “Holocaust and Heroism Remembrance Day.” The day is more commonly known as Yom HaShoah (יום השואה), a worldwide day of remembrance for the approximately six million Jews who perished in the Holocaust as a result of the actions carried out by Nazi Germany and its allies, we also remember the Jewish resistance in that period.

As we remember the Shoah, we should know that if it wasn’t for General Eisenhower much of the video and picture proof of the Holocaust would not be available today. He wanted to make sure that people in the future couldn’t deny or forget the horrors committed by the Nazis.

The Holocaust is unique in its volume and horrors and is a singular event in world history. Yes, there are genocides of other groups, and other horrors, even other atrocities made to the Jewish people.   But generally, the genocide is waged to suppress a group, to take their territory, for political reasons, or some economic reason like to enslave a people.  This was different– the Jews targeted by Hitler and the Nazis had no land and held relatively little power.  During the Holocaust, Jews were taken from all over Europe just to be killed. And while that was being done,  supposedly civilized leaders like Franklyn Roosevelt sentenced hundreds of thousands of Jews to death because he didn’t want more Jews in the U.S.

In Israel, Yom HaShoah is a national memorial day. It was inaugurated in 1953, anchored by a law signed by the first Prime Minister of Israel, David Ben-Gurion, and the Israeli President at the time, Yitzhak Ben-Zvi. It is generally held on the 27th of the Hebrew month of Nisan (generally sometime in April/early May, unless the 27th would be adjacent to Sabbath, in which case the date is shifted by a day which is the case this year.

The day started out as a commemoration recognized only in the Jewish State of  Israel, is now a day of remembrance throughout the world.

You may have heard that the reason the 27th of Nissan in the Hebrew calendar was chosen was that it matches the date of the start of the Warsaw Ghetto uprising –that isn’t true. The ghetto uprising was considered for Yom HaShoah but rejected because it would have meant the observance would have taken place the day before Passover. Those who observe the Passover holiday are busily preparing their homes for that observance that includes getting rid of all of one’s yeast/grain-related products, as well as rituals observed at home. There was no room for an additional observance.

Another reason the 27th of Nissan was chosen was that everything bad is balanced by something good in Jewish tradition. For example, in the book of Deuteronomy, God says I put before you a blessing and a curse; or in Exodus, the Golden Calf is followed by forgiveness. In that same vein, exactly a week after Yom HaShoah is Yom Ha’atzmah’ut Israeli Independence Day (the Israeli equivalent of July 4th). So the horror of the Shoah is balanced by the rebirth of the Jewish nation and the power to defend ourselves.

When America’s military leaders saw the horrors of the Nazi concentration camps, they were horrified. General Eisenhower insisted that a visual and written record be kept for history.

On the morning of April 12th, 1945, General Eisenhower met Generals Bradley and Patton at Ohrdruf Concentration Camp. Afterward, Eisenhower also ordered every American soldier in the area who was not on the front lines to visit Ohrdruf and Buchenwald. He wanted them to see for themselves what they were fighting against.

During the camp inspections with his top commanders, Eisenhower said that the atrocities were “beyond the American mind to comprehend.” He ordered that every citizen of the town of Gotha (near Ohrdruf ) personally tour the camp and, after having done so, the mayor and his wife went home and hanged themselves. Later on, Ike wrote to Mamie, “I never dreamed that such cruelty, bestiality, and savagery could really exist in this world.”

On the 19th, he sent a second cable suggesting that Marshall come to Germany and bring the press and members of Congress to see horrors for themselves:

We continue to uncover German concentration camps for political prisoners in which conditions of indescribable horror prevail. I have visited one of these myself and I assure you that whatever has been printed on them to date has been understatement. If you could see any advantage in asking about a dozen leaders of Congress and a dozen prominent editors to make a short visit to this theater in a couple of C-54’s, I will arrange to have them conducted to one of these places where the evidence of bestiality and cruelty is so overpowering as to leave no doubt in their minds about the normal practices of the Germans in these camps. I am hopeful that some British individuals in similar categories will visit the northern area to witness similar evidence of atrocity.

Eisenhower understood that many people would be unable to comprehend the full scope of this horror. He also understood that any human deeds that were so utterly evil might eventually be challenged or even denied as being literally unbelievable. For these reasons, he ordered that all the civilian news media and military combat camera units be required to visit the camps and record their observations in print, pictures, and film.

Sadly the General’s prediction proved correct. When some groups, even today, attempt to deny that the Holocaust ever happened, or that it wasn’t that bad,  they must confront the massive official record, including both written evidence and thousands of pictures, that Eisenhower ordered to be assembled when he saw what the Nazis had done.

It was the most appalling sight imaginable.

In a shed . . . was a pile of about 40 completely naked human bodies in the last stages of emaciation. These bodies were lightly sprinkled with lime, not for the purposes of destroying them, but for the purpose of removing the stench.

When the shed was full–I presume its capacity to be about 200, the bodies were taken to a pit a mile from the camp where they were buried. The inmates claimed that 3,000 men, who had been either shot in the head or who had died of starvation, had been so buried since the 1st of January.

General Omar Bradley said of the atrocities at Ohrdruf:

On this Yom HaShoah, indeed on every day, may the memories of those who suffered through the Shoah always be a blessing. And may we never forget what evil men can do when they are appeased by the rest of the world.

The video clip linked here is a news video taken that day the Generals visited Ohrdruf– It is graphic, but it should be watched nevertheless. Sadly even though I was the one who put it up on Youtube, they will not allow me to embed it because it ” has been identified by the YouTube community as inappropriate or offensive to some audience.”