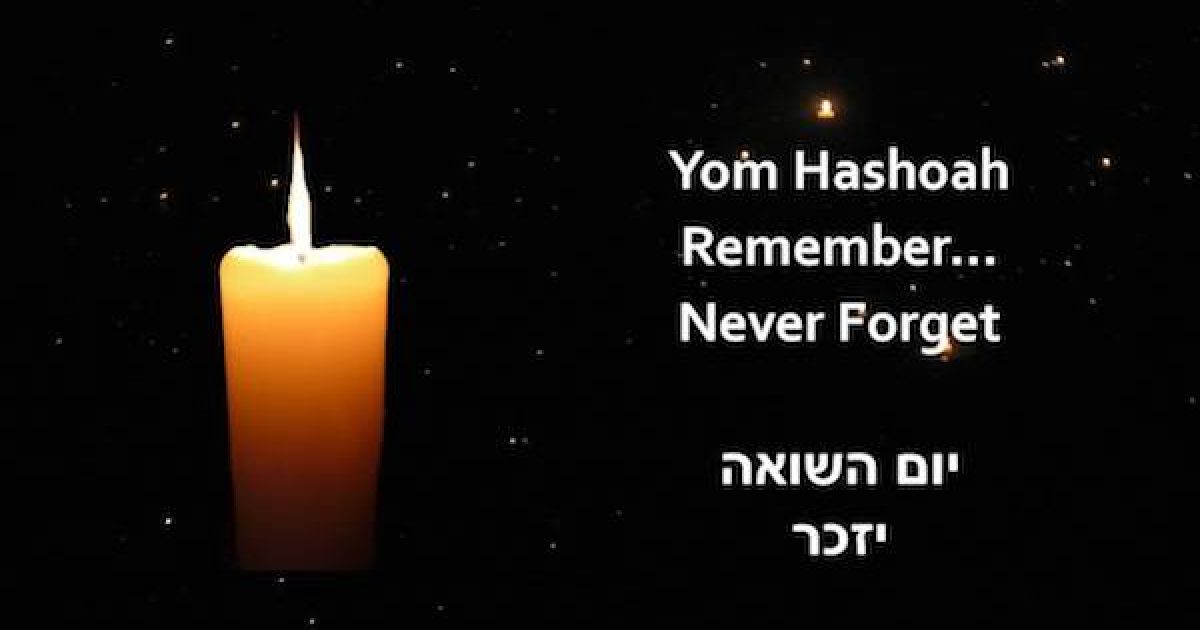 Sundown today, Wednesday 4/11 through Thursday 4/12 a solemn time for the Jews, Yom HaShoah,  Its full name Yom HaZikaron laShoah ve-laG’vurah  יום הזיכרון לשואה ולגבורה; which in English translates to “Holocaust and Heroism Remembrance Day.” The day is more commonly known as Yom HaShoah (יום השואה), a worldwide day of remembrance for the approximately six million Jews who perished in the Holocaust as a result of the actions carried out by Nazi Germany and its allies, we also remember the Jewish resistance in that period.

This year’s commemoration is particularly relevant as less than eight decades after Hitler was defeated, Antisemitism and Holocaust denial is growing at an accelerated rate throughout the world, yet it is mostly ignored here in America, and led by members of the government in Europe.

In Israel, Yom HaShoah is a national memorial day. It was inaugurated in 1953, anchored by a law signed by the first Prime Minister of Israel, David Ben-Gurion and the Israeli President at the time, Yitzhak Ben-Zvi. It is held on the 27th of Hebrew month of Nisan (generally sometime in April/early May, unless the 27th would be adjacent to Sabbath, in which case the date is shifted by a day. What started out a commemoration recognized only in Israel, is now a day of remembrance throughout the world.

You may have heard that the reason the 27th of Nissan in the Hebrew calendar was chosen was because it matches the date of the start of the Warsaw Ghetto uprising –that isn’t true. The ghetto uprising was considered for Yom HaShoah but rejected because it would have meant the observance would have taken place the day before Passover. Those who observe the Passover holiday are busily preparing their homes for that observance that includes getting rid of all of one’s yeast/grain related products as well as rituals observed at home (and eating the last pizza for eight days) there was no room for an additional observance.

The 27th of Nissan was chosen because in Jewish tradition is everything bad is always balanced by something good. For example, in Deuteronomy God says I put before you a blessing and a curse; or in Exodus the Golden Calf is followed by forgiveness. In that same vein, exactly week after Yom HaShoah is Yom Ha’atzmah’ut Israeli Independence Day (the Israeli equivalent of July 4th). So the horror of the Shoah is balanced by the rebirth of the Jewish nation and the power to defend ourselves.

Much of modern Antisemitism is different from the traditional Jew-hatred, it is disguised as anti-Zionism, and the haters claim that it is simply criticism of Israel.  The state department defines antisemitism as:

“Antisemitism is a certain perception of Jews, which may be expressed as hatred toward Jews. Rhetorical and physical manifestations of anti-Semitism are directed toward Jewish or non-Jewish individuals and/or their property, toward Jewish community institutions and religious facilities.”

The amazing part is that the definition was created under the administration of  Barack Obama, probably the most anti-Semitic presidential administration since FDR (FDR will be handled in a later post) Who among other things, held a double standard, and made demands he didn’t make of the Palestinians or real countries, and accused Israel of blood-libel type acts similar to the classic  anti-Semitic canards. Similarly, his two secretaries of state Hillary Clinton and John Kerry, Obama blamed Israel for all inter-religious or political tensions. 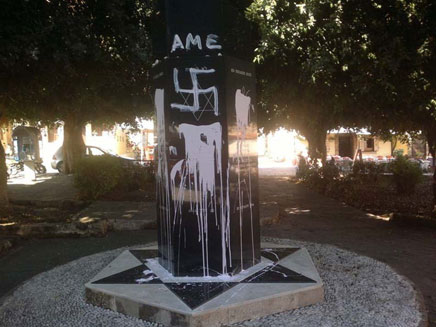 Desecration of Jewish Monument in Greece

Antisemitism in this country occurs regularly and is mostly ignored. The progressive movement in America generates most of the Antisemitism in the country (if you don’t believe me just go to sites such as Daily Kos, or Huffington Post, and search the words “Jew” and “Israel”). Interestingly although whenever a grass-roots conservative movement begins to grow, the same progressives use fake charges of Antisemitism as tools against the conservatives such they did with Steve Bannon or President Trump.

And it’s not just here in America. Antisemitism is state-sponsored in Europe, in fact recently Alan Hoffman the head of the largest Jewish charity in the world, The Jewish Agency warned that there is an ugly wave Antisemitism sweeping through Western Europe.

Throughout the world, at the UN and here in America, Israel is demonized and held to double standards not used against any other country including some of the world’s most despotic regimes, after eight years of the double-standard by President Barack Obama ignored by the MSM, anti-Semitic attitudes were more prevalent here in the US. After a year and a half of President Trump, things here seem to be calming down.

However, in Great Britain, the UK Labor Party has become so anti-Semitic that the Israeli party of the same name who had a long-term partnership with the UK version suspended that relationship.

When The HaShoah Siren Blares in Israel, Cars Stop— Even On The Busiest Highways

In Israel, at 10:00am on Yom HaShoah, a siren blares throughout the country and people will stop where ever they are.  Even if they are in their car on a highway they stop in the middle of the road get out of their vehicle and stand silently with their thoughts.

The Holocaust is unique in its volume and horrors and is a singular event in world history, yes there are genocides of other groups, and other horrors even to the Jews.  But generally, the genocide is waged to suppress a group, to take their territory or some economic reason like to enslave a people.  This was different– the Jews targeted by Hitler and the Nazi had no territory and held relatively little power.  In the Holocaust Jews were taken from all over Europe just to be killed. And while that was being done friendly supposedly civilized leaders like Franklyn Roosevelt and Winston Churchill sentenced hundreds of thousands of Jews to death because they didn’t want more Jews in their country.

May the Lord God bless all the souls who perished in the Shoah or suffered through their many tortures. May he continue to comfort those who suffered and are still among the living as well as their families and loved ones. And may the scourge of Antisemitism, still popular here in the western world be wiped out forever.

And finally a message from the President of The United States:

Days of Remembrance of Victims of the Holocaust, 2018

By the President of the United States of America

On Yom HaShoah, or Holocaust Remembrance Day, and during this week of remembrance, we reflect on one of the darkest periods in the history of the world and honor the victims of Nazi persecution.  This year marks the 75th anniversary of the Warsaw Ghetto Uprising when the imprisoned Polish Jews mounted a courageous and extraordinary act of armed resistance against their Nazi guards.

The Holocaust, known in Hebrew as “Shoah,” was the culmination of the Nazi regime’s “Final Solution to the Jewish Question,” an attempt to eradicate the Jewish population in Europe.  Although spearheaded by one individual, this undertaking could not have happened without the participation of many others who recruited, persuaded, and coerced in their efforts to incite the worst of human nature and carry out the ugliest of depravity.  The abject brutality of the Nazi regime, coupled with the failure of Western leaders to confront the Nazis early on, created an environment that encouraged and inflamed anti-Semitic sentiment and drove people to engage in depraved, dehumanizing conduct.

By the end, the Nazis and their conspirators had murdered 6 million men, women, and children, simply because they were Jews.  They also persecuted and murdered millions of other Europeans, including Roma and Sinti Gypsies, persons with mental and physical disabilities, Slavs and other minorities, Christians, Jehovah’s Witnesses, gays, and political dissidents.

Let us continue to come together to remember all the innocent lives lost in the Holocaust, pay tribute to those intrepid individuals who resisted the Nazis in the Warsaw Ghetto, and recall those selfless heroes who risked their lives in order to help or save those of their persecuted neighbors.  Their bravery inspires us to embrace all that is good about hope and resilience; their altruism reminds us of the importance of maintaining peace and unity, and of our civic duty never to remain silent or indifferent in the face of evil.  We have a responsibility to convey the lessons of the Holocaust to future generations, and together as Americans, we have a moral obligation to combat antisemitism, confront hate, and prevent genocide.  We must ensure that the history of the Holocaust remains forever relevant and that no people suffer these tragedies ever again.

NOW, THEREFORE, I, DONALD J. TRUMP, President of the United States of America, do hereby ask the people of the United States to observe the Days of Remembrance of Victims of the Holocaust, April 12 through April 19, 2018, and the solemn anniversary of the liberation of Nazi death camps, with appropriate study, prayers and commemoration, and to honor the memory of the victims of the Holocaust and Nazi persecution by internalizing the lessons of this atrocity so that it is never repeated.

IN WITNESS WHEREOF, I have hereunto set my hand this eleventh day of April, in the year of our Lord two thousand eighteen, and of the Independence of the United States of America the two hundred and forty-second.