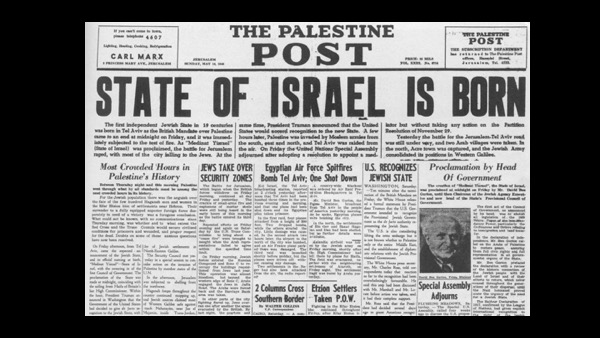 Today  in Israel is  Yom Ha’atzmaut (day of independence), the 72nd birthday (by the Hebrew calendar) of the modern State of Israel. On this day, 72 years ago, the world saw an actual miracle from God. After almost two millennia, the Jewish people were able to re-establish their political and geographic nation-state in their ancestral homeland as Israel declared her independence. 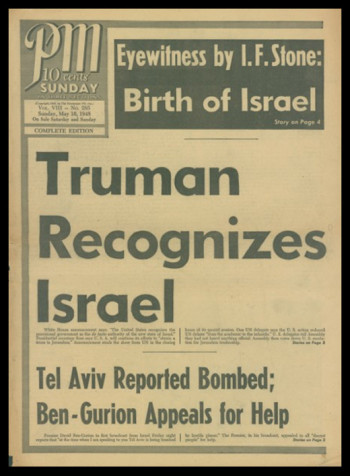 After the Bar Kochba revolt in 135 CE, the Romans punished the Judeans (Jews) for revolting for the second time in sixty years. To poke those rebellious Judeans in the eye, the Romans changed the name of their country from Judea to Syria Palaestina. The Romans used Palaestina after the ancient enemy of the Jews, the Philistines. Not that there were Philistines around anymore (they had disappeared from existence around eight hundred years earlier). The Byzantine Empire took control of the Holy Land around the year 330 C.E., and in the year 638, it was conquered by Muslim Arab forces and the Ottoman Empire. After WWI, Great Britain was given Palestine to control.

But less than three decades later, on this day in 1948, the hopes and prayers of so many generations of Jews, those living in the Holy Land, and those in the Diaspora had finally been fulfilled, thanks in a big way to an American President.

The Jewish State’s existence would have been very short-lived were it not for the strong will of President Harry S Truman, who became the first world leader to recognize Israel, and he did so over the objections of a man who was considered at the time a national hero Secretary of State George Marshall. At the time, Marshall was much more popular with the American people than President Truman, who at that point had never been elected to the Oval Office, he was the relatively unknown V.P. who took over when FDR passed away.

This President didn’t make this decision because of politics, but like so many of Truman’s policies, he supported Israel because he thought it was the right thing to do. Of course, some attributed Truman’s stance to something else.

Based on the Democratic Party’s move away from support of the Jewish State over the past decade, it may be reasonable to believe that if  Harry Truman tried to overrule the popular Marshall today, the Democratic party of Barack Obama, Rep Omar and the Farrakhan supporting Congressional Black Caucus might try to impeach their own President. At the very least, they would certainly vehemently object. The Democrats might even have tried to negate the U.N. Partition Plan, as most in the State Department recommended to Truman in 1948.  But a move like repealing the partition plan wasn’t Harry Truman’s style. 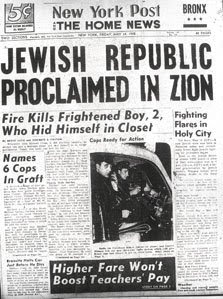 Israel just as forcefully as Truman, who had no voter base, was for it.

Clark M. Clifford, Special Counsel to President Truman, remembered the internal Truman administration fight regarding the recognition of the Jewish State, and the final discussion in the Oval Office. The meeting turned out to be a fierce battle with Clifford and the President on one side, Marshall and Undersecretary of State Robert Lovett on the other  Undersecretary of State Lovett first argued Truman was supporting Israel solely for political gain and he warned the President the move would lose more votes than it would gain.

When that didn’t work, Lovett tried another approach –the red scare (all of those Jews are commies).

Clark Clifford, who recommended that the President recognize the nascent State recalled the argument:

When Lovett was done speaking, it was the “hero” Marshall’s turn.  Clifford described the remarks: 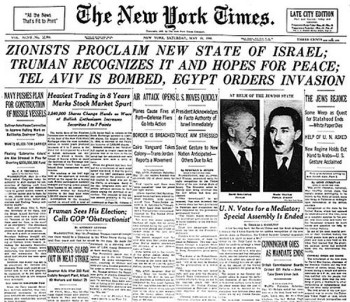 “It would be highly injurious to the United Nations to announce the recognition of the Jewish state even before it had come into existence and while the General Assembly is still considering the question. [At the time the UN was considering withdrawel of the partition plan]  Furthermore, such a move would be injurious to the prestige of the President. It is obviously designed to win the Jewish vote, but in my opinion, it would lose more votes than it would gain.” Lovett had finally brought to the surface the root cause of Marshall’s fury – his view that the position I presented was dictated by domestic political considera­tions, specifically a quest for Jewish votes. 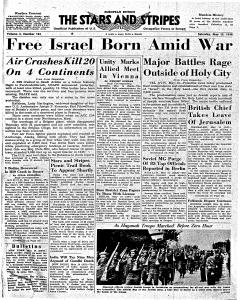 He was still furious. Speaking with barely contained rage and more than a hint of self-righ­teousness, he made the mostremarkablethreat Clifford says he ever heard anyone make directly to a President:

But Truman’s mind was made up– he was going to do the right thing. At 4 p.m. Friday, May 14, 1948, just before the start of the Jewish Sabbath, David Ben Gurion read a 979-word declaration of independence in front of a small audience at the Tel Aviv Art Museum (see video below). He finished in his usual terse manner. “The State of Israel is established! The meeting is ended.” 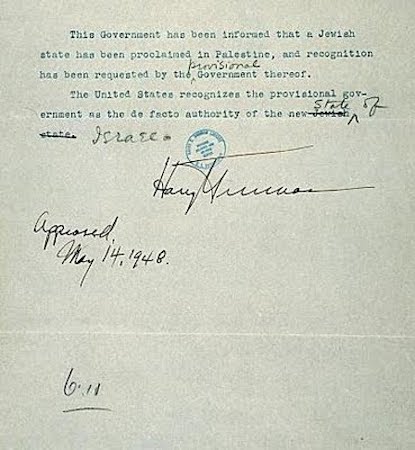 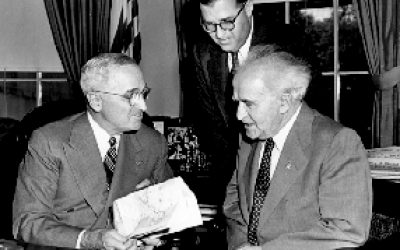 Truman was a president who judged not whether things would make America popular in the Arab world. He decided based on whether it was the right thing for the U.S. The man from Independence, Mo. knew the best thing for America’s future was to grab the moral leadership position of the entire world.

Beyond morality, Truman’s recognition was the right move for America.

Since the creation of Israel, while the U.S. has provided Israel with vital economic and military support, what most people don’t understand is that it is a two-way street. Israel has contributed to American security through counterterrorism training, intelligence sharing and military innovations as unmanned aerial vehicles and missile defense.

Israel has also shared with Americans advances in the high-tech, medical sectors that have helped maintain American economic competitiveness and communications. Israel’s breakthroughs in irrigation technology have helped American farmers to feed the world. There is so much more–but that is a different post.

Today, the political descendants of Harry Truman appease the extreme leftists who have gained control of their party by opposing the Jewish State. Today’s Democrat party is controlled by anti-Israel leftists who may have tried to impeach Truman if he decided to recognize the new State of Israel today, or maybe they would only try to “string him up.”