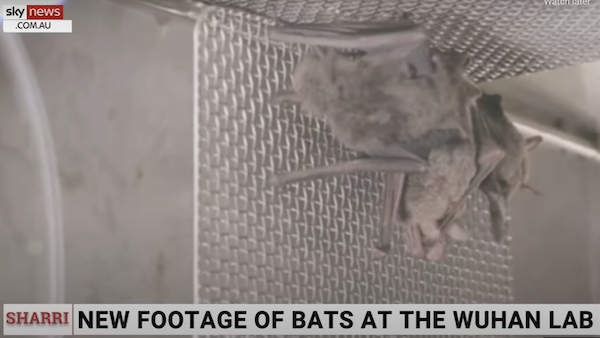 Award-winning investigative journalist for the Daily Telegraph and Sky News show host, Sharri Markson, has taken a lot of heat for her reporting examining the origins of the coronavirus — especially for saying that there is a possibility that it may have leaked from a lab in Wuhan, China. Wuhan Lab kept bats.

Some of the things that she has been reporting on for a year are now finally being examined by scientists and journalists a year and a half after the pandemic started.

Her latest bombshell exposed another lie from the WHO and Wuhan Lab.  After a year of denials that the Wuhan Institute of Virology did not keep live bats, a newly unearthed video from the Chinese Academy of Sciences shows that it did keep bats.

The 10 minute video is titled “The construction and research team of Wuhan P4 laboratory of Wuhan Institute of Virology, Chinese Academy of Sciences” and features interviews with its leading scientists.

The World Health Organisation report investigating the origin of the pandemic failed to mention that any bats had been kept at the Wuhan Institute of Virology and only its annex referred to animals being housed there.

“The animal room in the P4 facility can handle a variety of species, including primate work with SARS-CoV-2,” it states.

A member of the World Health Organisation team investigating the origin of the pandemic in Wuhan, zoologist Peter Daszak said it was a conspiracy to suggest bats were held at the Wuhan Institute of Virology…

…The Chinese Academy of Sciences video was discovered by researchers investigating the origin of the pandemic who call themselves DRASTIC.

Digital archivist “Jesse” found the Chinese Academy of Sciences Video while the group’s co-ordinator, who goes by a pseudonym of “Billy Bostickson” for safety reasons, has long complained evidence bats were housed in the Wuhan laboratories.

It also exposes some of the tensions between the French and the Chinese in the lab’s building.

Early in the pandemic, there were rumors that bats were kept in labs on social media by whistleblowers, but it’s incredibly difficult to confirm such accounts. However, The Sun reported in May 2020 that there was a shocking lack of proper precautions taken by researchers, including not wearing gloves when collecting coronavirus samples. One scientist admitted to getting sprayed with bat urine and that some researchers were bitten by bats and splashed with blood. Photos of the scientists not using safety precautions when handling samples were removed from the lab’s website.

Immediately, denials dismissed this suggestion that bats were ever in the lab, including Peter Daszak, the guy who funneled U.S. money to the Wuhan Lab and sent an email thanking Dr. Fauci for dismissing the lab-leak hypothesis. Daszak was also one of the investigators in the joint World Health Organization/Chinese Communist Party “investigation” into the origin of SARS-CoV-2 that concluded that the virus didn’t come from a lab.

Taiwan News recently released a 2017 video from China confirming the original claims about the lack of safety precautions and that researchers were bitten by bats.

China lied, and up until a few weeks ago, the journalistic consensus was that the possibility of a lab leak was a conspiracy theory.

This isn’t a confirmation that it did leak from a lab. Still, it certainly is one more piece of evidence that it was possible, especially with the apparent lack of safety precautions necessary for a P4 lab.

Fortunately, one badass Australian investigative journalist hasn’t forgotten how to do her job.