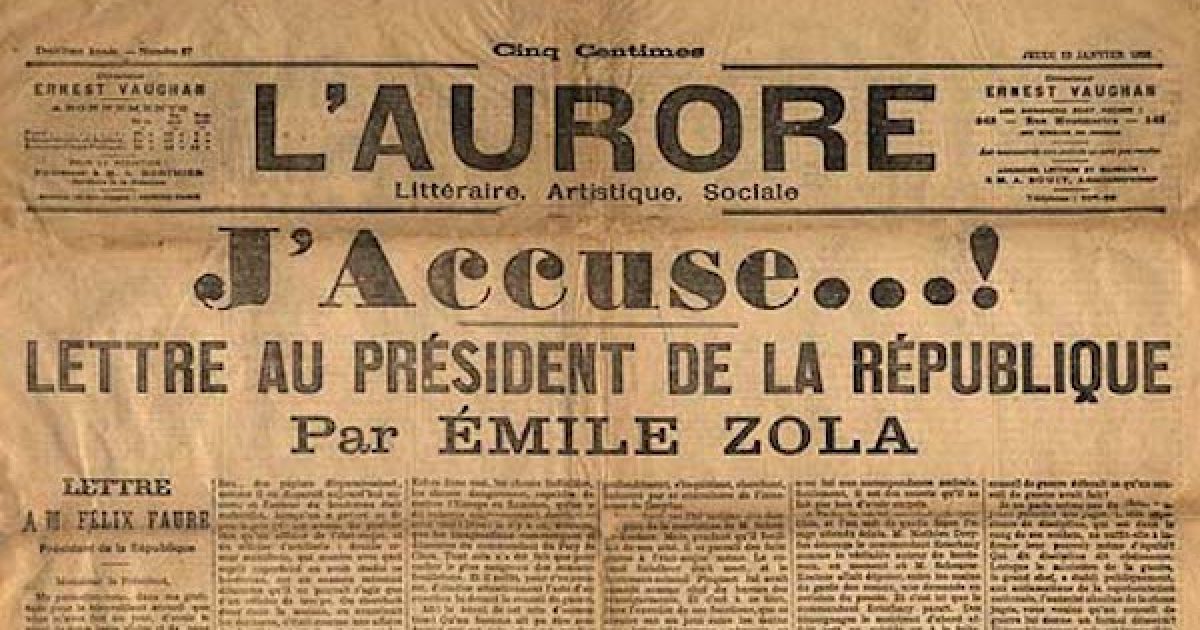 “J’accuse!” is arguably the most famous newspaper headline of all time (there are those who would nominate the NY Post’s Headless Body in Topless Bar). “J’accuse! was Emile Zola’s 4,000-word front-page defense of French Army Capitan Alfred Dreyfus, a Jew, who was railroaded into a treason conviction by the French Army.  It appeared 120 years ago today on January 13, 1898. More than anything else the Dreyfus Affair and J’Accuse made anti-Semitism acceptable in ‘polite society,” the press, and most recently the Democratic Party.

As described by Jeff Jacoby in a 2008 Boston Globe column:

The Dreyfus saga was the first legal ordeal to trigger a media feeding frenzy, and to view “J’accuse!” more than a century after it appeared is to confront the birth of something the modern world takes for granted – the power of the press to galvanize and shape public opinion. The Dreyfus case began with the discovery of a letter offering to sell French military secrets to the Germans. After an inept investigation, the military intelligence chief, an outspoken anti-Semite, fingered Dreyfus, the only Jew on the army’s General Staff.

In truth, Dreyfus was an ardent French patriot, whose boyhood ambition had been to serve his country in uniform. A secret court-martial convicted Dreyfus on the basis of a falsified dossier, and in a humiliating public “degradation” at the Ecole Militaire, he was stripped of his decorations and his sword was broken. As Dreyfus loudly protested his innocence, the historian Paul Johnson writes, “an immense and excited crowd … was beginning to scream, ‘Death to Dreyfus! Death to the Jews.'”

Within months a new intelligence chief had identified the real villain, Major Ferdinand Walsin-Esterhazy. Supporters of Dreyfus – the Dreyfusards – demanded that the case be reopened, but high-ranking officers, determined to shield the army from embarrassment, conspired to protect the traitor. In a sham court-martial, Esterhazy was acquitted.It was in response to that second travesty that Zola wrote “J’accuse!” All this was played out against a wave of anti-Semitic hysteria, much of it fueled by the press. Among the most chilling items [published at the time were] headlines, and caricatures depicting Jews as snakes, vermin, and hook-nosed swindlers, a filthy race from which France must be cleansed.

One giant poster urges voters to support Adolphe Willette, unabashedly campaigning for municipal office as the “Candidat Antisemite.” The Dreyfus Affair set off the first great wave of modern political anti-Semitism, a forerunner of the Nazi terror that would devour Europe a few decades later. Zola’s article mobilized the Dreyfusards, who included many of the era’s leading writers, artists, and academics. This too was the birth of something the modern world takes for granted: an intellectual class actively engaged in a war over national culture and values.

To the supporters of Dreyfus, the stakes were those of French democracy and justice: individual rights, due process, equality under the law. The anti-Dreyfusards feared the loss of social stability, clerical influence, and French tradition. The battle raged for a dozen years, cleaving French society, and irrevocably changing the 20th century. Dreyfus was eventually freed and exonerated, reinstated as an officer and publicly decorated with the Legion of Honor. His patriotism undimmed, he saw active duty in World War I, then lived quietly in retirement until his death in 1935.

The effects of the Dreyfus Affair lived on long after Dreyfus was laid to rest. The anti-Semitism it roused was institutionalized, the anti-Dreyfusards in time becoming the pro-fascist core of the Vichy regime. The Austrian journalist Theodor Herzl, stunned by what he saw during Dreyfus’s “degradation,” went on to write “The Jewish State,” the book that launched modern Zionism. But of all that the Dreyfus Affair set in motion, it is the ascendancy of the press that has, for good and ill, most shaped modern life. “J’accuse!” Zola wrote, and a new age was born.

This “new age” has spread throughout the world and even here in America where it has become institutionalized in the Democratic Party. The Democrats picked an anti-Semite, Keith Ellison, for its Deputy Chairman, Democrats such as NY’s Kirstin Gillibrand protect anti-Semite Linda Sarsour and other Democrats invite her to speak to our college students. Sarsour blames her bad image on the Jewish-controlled media., Al Sharpton, a man who led two anti-Semitic pogroms in NYC advises Democrats (and celebrated by Jewish politicians like Senate Minority Leader Chuck Schumer),  and Barack Obama the former President of the United States is an anti-Semite.

In 2012 Democrats removed planks from its platform originally designed to protect Israel from terrorism and to protect its status as a Jewish State.

Based on the definition of Antisemitism created by State Department, their action and the criticism of Israel by Democratic supported activists is Antisemitism.

The Barack Obama White House and State Department refused to acknowledge that the attack on the Kosher supermarket in Paris a few hours before the Jewish Sabbath when families are shopping for their Sabbath Dinner, had anything to do with Antisemitism.

FDR a Democratic Party hero who was elected President four years after Kristallnacht refused to allow Jews to escape to American shores, he thought there were enough Jews in America already.

Former U.S. President Barack Obama reawakened the medieval anti-Semitic blood libel with false accusations against the Jewish State and refusing to acknowledge the Palestinian’s use of human shields and condemning Israel for any civilian casualties despite the fact that his own Chairman of the Joint Chiefs of Staff General Martin Dempsey said that Israel went to “extraordinary lengths” to limit civilian casualties in the recent war in Gaza and that the Pentagon had sent a team to see what lessons could be learned from the operation. 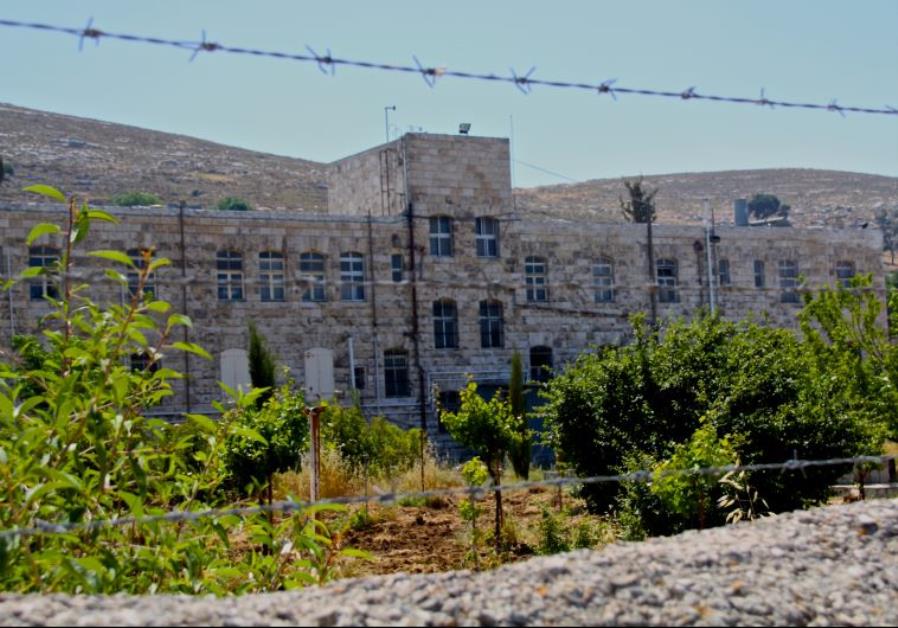 For years the US Presbyterian Church owned a piece of land in the West Bank where it ran a tuberculosis hospital and then a hostel on the site.  Obama didn’t care when it was owned by Presbyterians. But when the land was legally purchased in 2009 by Dr. Irving & Cherna Moskowitz from US Presbyterian Church. Well, actually it wasn’t that actually the building of houses that the Obama administration objected to. If it were intended to house Christians or Muslims they wouldn’t have objected.  As it is with so many other things, the Obama administration objected to the fact that Jews were going to live in those buildings.

Jeff Jacoby was correct when he wrote a decade ago that the anti-Semitism roused by the Dreyfus affair and the famous headline/article by Emile Zola 120 years ago today, was institutionalized. But I don’t believe that even a wise columnist like Jacoby could have realized how ingrained that hatred would become in the Democratic Party.