Yom HaShoah: If We Forget The Holocaust, It Will Happen Again 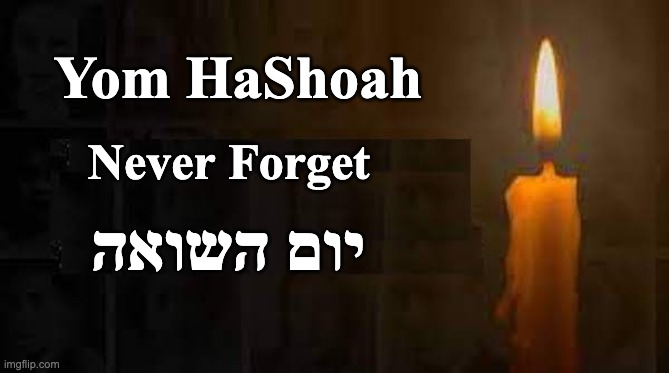 “If we forget, the dead will be killed a second time, and then they are today’s victims.”  Elie Wiesel.

The day is more commonly known as Yom HaShoah (יום השואה), a worldwide day of remembrance for the approximately six million Jews who perished in the Holocaust as a result of the actions carried out by Nazi Germany and its allies and for the Jewish resistance during that period.

In Israel, it is a national memorial day. It was inaugurated by the Israeli Knesset in 1951. Yom HaShoah is held on 27th of Nisan in the Jewish calendar. It began as an Israeli holiday and is now a remembrance throughout the Jewish world.

“Our immortality comes through our children and their children. Through our roots and branches. The family is immortality. And Hitler has destroyed not just branches and roots, but entire family trees, forests. All of them, gone.”  Amy Harmon

Part of remembering is the realization that as the news about Hitler’s extermination of the Jewish people began to leak out to the world—there was nothing but silence.

Many believe the 27th of Nissan in the Hebrew calendar was chosen for Yom HaShoah because it was the date of the start of the Warsaw Ghetto uprising. That isn’t entirely true. The ghetto uprising was considered and rejected for Yom HaShoah because that would have placed the observance would have taken place the day before Passover. Those who observe the Passover holiday are busily preparing their homes for that observance.

The 27th of Nissan was chosen because, in Jewish tradition, everything bad is balanced by something good. Those familiar with Deuteronomy may remember God saying, “I put before you a blessing and a curse.” Or in Exodus, when the Golden Calf incident is followed by forgiveness, etc. In the same vein, one week after Yom HaShoah is Yom Ha’atzmah’ut- Israeli Independence Day (their equivalent of July 4th). So the horror of the Shoah is balanced by the celebration that the Jewish nation was free to return to their eternal homeland after 2,000 years of exile.

During the Holocaust, most countries (including America) were reluctant to take in Jews fleeing the genocide of Jews.

Many reports about the Russian invasion of Ukraine are comparing it to the Holocaust and are calling Russian President Putin–Hitler. What is happening in Ukraine, especially the Russian targeting of civilians, is sickening, and Putin is guilty of war crimes. But comparing it to the Holocaust and Hitler displays ignorance about what happened to the Jewish people in the 1940s.

The Holocaust is a singular event in world history. Yes, there are genocides of other people and other horrors such as what is happening in Ukraine today. There were even other atrocities committed against the Jewish people.   But generally, a genocide is waged to take a people’s territory for political reasons or even economic reasons like taking their wealth or enslaving a people. The Shoah was different– the Jews targeted by Hitler and the Nazis had no land and held relatively little power. The Nazis didn’t have a geographic, political, or economic reason for the Holocaust. The only purpose of the Nazi’s genocide of the Jewish people was to wipe the Jewish people off the face of the Earth.

Why do people say, “never forget?” There are many reasons, but perhaps the most important is if we forget the Shoah it will happen again.

In Israel, one way people remember the Holocaust on Yom HaShoah is the air raid siren sounding throughout the country at 10:00 AM. Once the siren sounds, Israelis stop whatever they are doing for two minutes and reflect on the Holocaust even when people are driving their cars. They stop in the middle of the road, standing beside their vehicles in silence as the siren is sounded (see video below)

And hatred of Jews is increasing again. The Anti-Semitism Worldwide Report 2021 reports: “in 2021 there was “a significant increase in various types of anti-Semitic incidents in most countries with large Jewish populations”.

Yom HaShoah is not only about remembering. It’s also about speaking out. We must demand the silence about Antisemitism ends. It’s the only way to ensure that ‘Never Again’ is never forgotten.