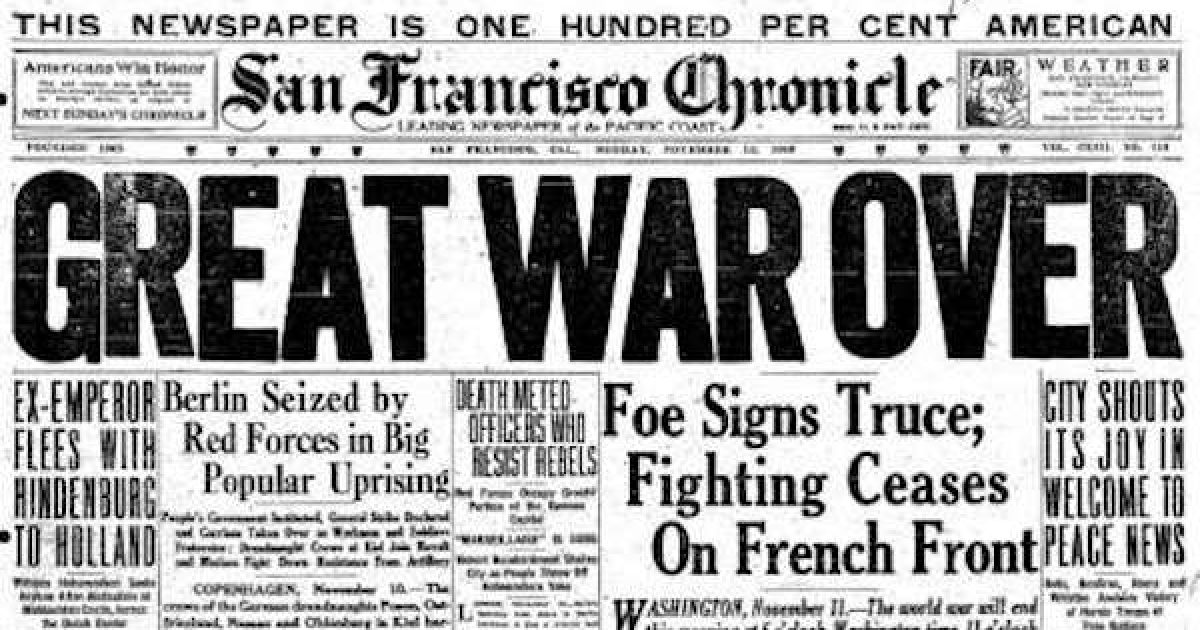 Ninety-nine years ago, in the eleventh hour of the eleventh day of the eleventh month, the armistice was proclaimed that ended the terrible fighting in World War I.  A war that had erupted in large part because Europe’s political leaders, a century on from the Napoleonic conflicts, were accustomed to war remaining limited, produced some of the bloodiest battles ever fought. The six-month battle of the Somme in 1916 took the lives of an unimaginable 1.5 million French, German, and British soldiers – without either side achieving sustainable penetration of the line of confrontation or any operational victory. WWI was the most tactically and politically frustrating of wars, admitting little maneuver, little jockeying for advantage, and no enduring significance to victory.

But it marked the debut of the United States on the stage long occupied by the great powers of Europe, as American soldiers boarded troop ships to head “Over There,” and with their numbers and supplies, along with improving mobile tactics in the battles of 1918, turned the tide in favor of the Western alliance. We remember WWI now – as we should – for its excruciating trench battles and horrific death toll.  But it also inaugurated, in cataclysm and blood, the defining trends of the 20th century.

American geopolitical significance was one; of all the major political players in World War I, Woodrow Wilson was the one to put his name on an enduring international idea. Another was the rapid mechanization of warfare, in three dimensions.  WWI saw the first use of the armored tank, the debut of the first aircraft carrier prototype, the use of aircraft for bombardment, the rise of the submarine to effectiveness and tactical primacy in naval combat, and the fulfillment for ground warfare of the promise of indirect artillery fire, which pinned down troops in trench lines hundreds of miles long for years until military planners could figure out how to maneuver against it. The trend toward breaking up empires in favor of nation-states and popular sovereignty lurched forward at the end of World War I, which started with six major empires governing parts of Europe – British, French, German, Russian, Austro-Hungarian and Ottoman – and ended with only two intact.  Indeed, out of the break-up of empires in WWI came the eventual fractious, uneasy statehood of most of the Middle East, with whose consequences we live today.

But on that Armistice Day in 1918, few could have foreseen the cast of sleeping giants – and some would say gnomes and demons – that was awakened by World War I, the Great War.  Few, indeed, had had any inkling in August 1914 that the troops heading off to war, with bands playing and tripod-mounted cameras snapping, would be ground to a pulp within months; or that the joking complacency of the pre-war summer would yield ultimately to a melancholy civilizational silence, in which the proclamation of armistice was a nearly soundless ripple, and weary peoples turned to the business of their son-denuded homes and towns and villages and sought reasons to go on.

We never do see it coming, at least not in the outlines visible in hindsight.  War was in the air in 1914, but no one foresaw what that war would actually turn into.  A quarter-century later Europeans were as steeped in complacent certainties as ever, even after Germany remilitarized the Rhineland, occupied the Sudetenland and invaded Austria.  As Clare Booth Luce recorded in her incandescent Europe in the Spring, the political class of France, England, and the Low Countries spent the “Phony War” period of late 1939 and early 1940 reassuring itself that Hitler wasn’t going to invade them.  Nor were Americans any more farsighted:  our Congress came within a vote of ending the draft in 1940, so certain was it that whatever stew they managed to cook up over there in Europe, we in America could stay out of it if FDR’s hands were properly tied.

We are always living with unfinished business, and everything that seems like an ending to us eventually turns out to have been a beginning.  So it is with the armistice that ended combat in WWI.  In 1954, there having intervened a second world war and the Korean War, President Eisenhower signed the proposal to commemorate the day as “Veterans Day,” and remember veterans of all wars on it.  With the passage of time and the natural demise of the soldiers who fought in World War I, our vivid memory of the war itself is fading. But it remains a cautionary event, a source of fable and moral exhortation, and often, today, freshly relevant – and that is due in part to the fact that it ended with an armistice, the quintessential emblem of unfinished business.

Unfinished business is all around us today, as nations jockey against a precarious international order and America herself focuses inward.  It has never been wise to bet on the commitment of men or nations to peace, and we have no reason to do so in 2015.  Veterans Day is a day significant in this geopolitical sense, because of its origins in America’s first participation in a campaign to restore a global order. Our president at the time called it fighting a “war to end all wars.” It wasn’t, of course; war has not ended.  We have had to keep going back again and again, and the features of WWI have dictated where and when, and why and how.

But Veterans Day is also well named and well focused, in that its subject is veterans:  those who fight when unfinished business creeps up on us when foresight fails, and the best-laid plans make contact with those of our opponents, and limp back to us wounded and inert.  In today’s America, our veterans are volunteers.  We are, uniquely for a great power, a little-militarized society:  our armed forces are comparatively small given our size and power, and relatively few Americans today find their personal lives touched by participation in war and combat.  Yet we see our military not as a cadre of alien professionals, but as our sons and daughters, sisters and brothers, fathers and mothers – as a mobilized yeoman people, representing ourselves and what we believe in.

Our participation in WWI, a watershed outing for us, might have changed that.  But it did not.  Conflicts like Korea and Vietnam, conducted in a heavy political twilight, could have changed our perception of the purpose and character of our veterans.  But in the end, they did not.  Our armed forces, for all the natural human faults of those who people them, enjoy today an exceptional level of confidence from the nation, and a support from many that is heartfelt and visceral.

We are 99 years on now from that November day in 1918 that marked an agreement of combatants to unfinished business and launched the near-century in which we have tried to finish it.  The unforeseen that is always around the next corner makes these lines from John McCrae’s 1915 poem “In Flanders Fields” particularly poignant:

In Flanders fields, the poppies blow
Between the crosses, row on row,
That mark our place; and in the sky
The larks, still bravely singing, fly
Scarce heard amid the guns below.

We are the Dead. Short days ago
We lived, felt dawn, saw sunset glow,
Loved and were loved, and now we lie
In Flanders fields.

Take up our quarrel with the foe:
To you from failing hands we throw
The torch; be yours to hold it high.
If ye break faith with us who die
We shall not sleep, though poppies grow
In Flanders fields.

Do they sleep, the Dead in Flanders fields?  Have we who caught the torch kept faith with them?  We have spent 99 years trying to figure that out.  We are likely to spend at least 99 more.  On Veterans Day, we can take a moment to honor the veterans who have carried that torch, giving the reality of flesh, blood, and spirit to our often confused, disputatious, dilatory, and halting attempts to keep faith with those who lie in Flanders fields.