Women’s March Says It Loves, But Spreads Hatred Instead 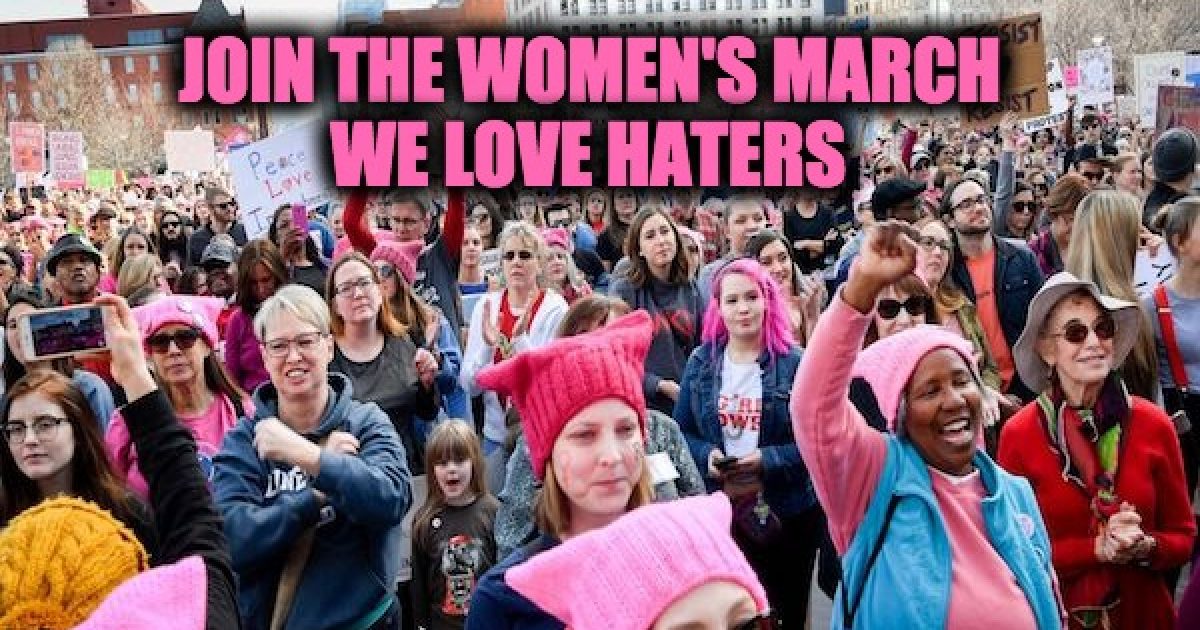 After a week of pressure, the Women’s March finally released a statement that neither condemns Farrakhan the minister of hate nor does it apologize for the fact that the Women’s March leadership is filled with haters.

Anti-Semitism, misogyny, homophobia, transphobia, racism and white supremacy are and always will be indefensible.

The statement is a lie.  A year ago the Women’s March organized “A Day Without Women.” Those protests were run a Palestinian Terrorist who killed two students and was deported from the US in 2017, groups who call for the destruction of the State of Israel, and groups who participate in the anti-Semitic BDS movement

Rasmea Yousef Odeh is one of eight women who organized this particular protest. She’s a woman who spent a decade in an Israeli jail for her involvement in two terrorist bombings made while she was a member of the Popular Front for the Liberation of Palestine (PFLP). One of those attacks, a 1969 bombing of a Jerusalem Super-Sol Market killed two Hebrew University Students Edward Joffe and Leon Kanner while they were shopping for groceries.

On February 6th, Odeh she joined other radicals to write a manifesto for the March 8th protest. Her cohorts included  Angela Davis, a self-professed communist professor (now retired), who was a member of the original Black Panthers and a 1960s radical icon. Davis was prosecuted and acquitted in 1972 for an armed takeover of a California courtroom that resulted in the murder of a judge. Other co-authors included Maoism supporter Tithi Bhattacharya (Maoists are considered a terrorist group), as well as Linda Martín Alcoff, Cinzia Arruzza, Nancy Fraser, Barbara Ransby, and Keeanga-Yamahtta Taylor

Joining in on the fun was a rogue’s gallery of anti-Semitic organizations as well as ones calling for the destruction of Israel.

American Muslims for Palestine (AMP) is perhaps the most troubling of the organizations listed. Jonathan Schanzer, the vice president for research at the Foundation for Defense of Democracies, testified to Congress last year that AMP was founded former members of the Holy Land Foundation, which was shut down after it was found to have been funding the terrorist group Hamas. Salah Sarsour, a current AMP board member, was once jailed in Israel for sending funds to Hamas. (Ironically, Hamas, the terrorist group that rules the Gaza Strip, announced earlier this week that it was cancelling the International Women’s Day holiday.)

AMP is also a leading promoter of the Boycott, Divestment and Sanctions (BDS) campaign targeting Israel, which is both anti-Israel and anti-Semitic.  Many leaders of the BDS campaign have publicly affirmed that they seek Israel’s destruction. BDS co-founder Omar Barghouti, an opponent of the two-state solution, said in 2014 that Palestinians have a right to “resistance by any means, including armed resistance,” while leading activist As’ad Abu Khalil acknowledged in 2012 that “the real aim of BDS is to bring down the state of Israel.”

Odeh became a citizen in 2004, but in 2014 she was convicted of lying to the immigration authorities about her Israeli conviction. Odeh checked “no” on immigration and citizenship forms filled out when asked whether she had ever been convicted of a crime. She was also accused of lying in her immigration papers about her prior residency, falsely claiming that she had lived in Jordan from 1948 until she came to America. On 9/20/17  after a three-year very public court battle that her Woman’s March friends had to know about, the woman who killed two boys officially lost the US citizenship was deported from the United States for concealing her murder/conviction of two Israeli college students.

The Woman’s March lost an anti-Semite, so they replaced her for their January 2018 march. One of the organizers of the January protest was Linda Sarsour, the anti-Semite supported by Democrats such as New York’s Governor Cuomo and like Tamika Mallory, she is supported by Senator Gillibrand.

Sarsour spoke and participated at a Nation of Islam event in 2015, she once responded to Farrakhan’s putrid hatred with a glowing post on fellow Woman’s March organizer Carmen Perez’s Facebook page praising Farrakhan’s youthful demeanor.

Linda Sarsour Claims Zionists cannot be feminists. “It just doesn’t make any sense for someone to say, ‘Is there room for people who support the state of Israel and do not criticize it in the movement?’ There can’t be in feminism. You either stand up for the rights of all women, including Palestinians, or none. There’s just no way around it,” Sarsour said. But she doesn’t support Jewish women having rights.

Much of modern Antisemitism is different from the traditional Jew-hatred, it is disguised as anti-Zionism, and claimed to be simply criticism of Israel.  In 2009 while Barack Obama was president, the US State Department defined Antisemitism— the list is long but one of the items includes, denying the Jewish people their right to self-determination, and denying Israel the right to exist [also known as Zionism]

She should tell that to my friend Dr. Phyllis Chesler who is not only a Zionist but an internationally recognized leader of the feminist movement.

Also at the January March another anti-Semite, a woman with ties to the Muslim Brotherhood/Hamas. She was part of the Florida march: Rasha Mubarak,and the CAIR regional coordinator.  And when several Jewish ladies attempted to say something about that, they were blocked and their comments deleted by the Women’s March page, saying that they “don’t tolerate hate.”

This was posted by on the march’s Facebook page by a woman who identified herself as one Jewish lady:

I will not support any march Rasha Mubarak is featured in. Rasha Mubarak is CAIR Floridas Regional coordinator. She is also the PR person for the MWO. Here are the reasons I refuse to participate in any event she is given a leadership role:

Here is Ms. Mubarak at an Al Quds rally awash with Hezbollah flags. Hezbollah of course
has been designated a terrorist organization and is responsible for several deadly attacks including the attack on barracks in Lebanon which killed 241 U.S. marines. In the video Ms. Mubarak says to a man she calls Uncle: “Dont talk to them Uncle, they’re Jews.”

Just as disturbing– Ms. Mubarak also, a few short months after the attack at Pulse welcomed Imam Siraj Wahhaj to Orlando for a CAIR fundraiser. Wahhaj is an unindicted co-conspirator in the 1993 World Trade Center Bombings. He acted as a character witness for the Blind Sheik and famously threatened to take the mob to Toronto to stop a gay-friendly mosque in Toronto from being established.

The Orlando Women’s March Page deleted the woman’s remarks, calling them “divisive” and insinuating the lady and the other Jewish commenters who wanted to bring attention to the above video were “bigoted” and “hateful.”

Interesting how the Women’s March claims to be “inclusive” and for “free speech” when they only allow the opinions of giddy liberal women who have no clue what’s really going on. And they are decidedly pro-Palestinian to the exclusion of every other group in spite of their claims otherwise.

“Pro apartheid” is a common statement used as propaganda by the pro-Palestinian crowd. The Jewish women were even called “Nazis” by one woman on the page a term that cuts at the heart of who the ladies are. The Women’s March claims to be inclusive, yet have thrown Jewish women out of the marches so often, that a new band of progressive Jewish women formed their own group, according to Algemeiner.

Another Women’s March organizer Carmen Perez is also a fan of Farrakhan. In this picture below from her Instagram account Perez (on the right) honored the hater as a valued elder.

Perez has also posted videos of Farrakhan’s rantings on her Instagram, here and here for example

When the ADL asked Ms.Perez about her association with Farrakhan, Perez refused to denounce his anti-Semitism and instead retorted: “There are no perfect leaders.” In other words, “of course he is a hater, but who cares.

The Women’s March could write 100-page manifesto declaring how they love everybody–but the truth is,  the women leading the Women’s March and the organizations it associates with are haters. or people who condone hatred, and should be labeled as such by the media, and by all people who abhor bigotry.