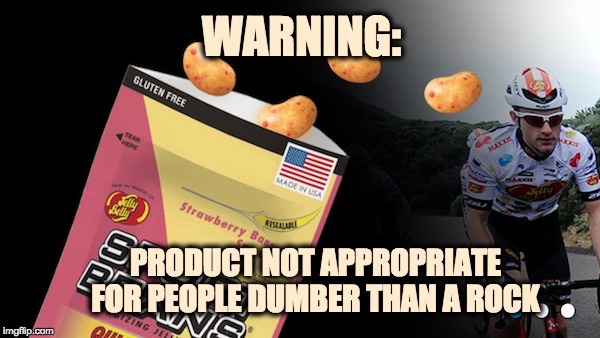 By Keely Sharp and Jeff Dunetz

This may be a sign that mankind has grown so stupid, we no longer deserve to exist…and I am not just talking about progressives, Democrats, and other socialists. The woman described in this story a complete moron but to be honest that would not be fair to morons (complete or partial). They are much smarter than her.

Perhaps she’s not a moron, perhaps she grew up under a rock, or Iraq, or Iran..or some other place where existing in medieval times. Because here in the United States of America it common knowledge that most candy is sweetened with sugar (unless of course it says sugar-free). Actually that’s what stone age lady thought, that she was being fooled.

The California cretin (of course she is from California) is suing Jelly Belly, the maker of jelly beans, because she was “tricked” int believing they were sugar-free……let that one sit for just a minute.

There’s a very easy way of telling, as a diabetic I can tell you that if it tastes good…it’s real sugar. But this lady probably didn’t try the “taste test.”

Here’s another way, the package says “Gluten Free,” shouldn’t that serve notice that if it was “sugar-free” there might be something on the package?  Maybe not because I am sure this lady doesn’t have a tattoo on her forehead saying “brain free.”

According to Legal News Line, Jessica Gomez, from San Bernardino county, bought the “Jelly Belly’s Sports Beans” which contain carbohydrates, electrolytes, vitamins, evaporated cane juice, and more. She claims that the “fancy phrasing” confused her because the label referred to the sugar as evaporated cane juice.

Gee cane juice—mmmm— what would one think that was, blood and perspiration from someone who was caned in Singapore? Come on even if one didn’t know what it was…someone who was trying to avoid sugar and had an I.Q. higher than a sugar cane plant, would read “cane juice” and ask if that was sugar. Hey Jessica, curiosity killed the cat, but humans with a low intelligence are allowed to ask questions.

Gomez purchased Jelly Belly’s Sport Beans, a product marketed as an exercise supplement containing carbohydrates, electrolytes and vitamins, which lists “evaporated cane juice” on the label instead of citing sugar as an ingredient.

In the class action suit, Gomez claims the wording on the label is in violation of state’s Consumer Legal Remedies Act, Unfair Business Practices Law and False Advertising Law and is designed to intentionally deceive the health-conscious consumers being targeted by Sport Beans.

Ooh Class action too.  If she wins maybe Ms. Gomez will take a balloon to Oz and ask the wizard for a brain. Although he might ask you to throw water on a wicked witch first– that may be hard because Congress is in session and Pelosi doesn’t days off.

Jelly Belly called the case “nonsense,” as stated in an April motion to dismiss the lawsuit, arguing, “No reasonable consumer could have been deceived by Sport Beans’ labeling – Gomez could not have seen ‘evaporated cane juice’ without also seeing the product’s sugar content on its Nutrition Facts panel.”

But Gomez seems to have the Food and Drug administration on her side..which proves the entire thing is idiotic. In May 2016, the FDA announced that the term “juice” should not be used unless referring to that of a fruit or vegetable, and that calling sugar “evaporated cane juice” is in fact misleading to consumers.

But Jelly Belly, which is headquartered in Fairfield, Calif., is still arguing that the case should be thrown out for a number of reasons, primarily because “Plaintiff does not explain why an athlete—or anyone [who is allowed out of their house without a helmet]—would be surprised to find sugar in a product described as ‘Jelly Beans’.”

How can Jelly Belly at fault, let’s face it–if someone looked inside this lady’s cranium they would see nothing but an Error 404 message. It would be different if she was a child (under 5) but she is an adult –and normal adults would be suspicious if there was NO sugar in jelly beans. But this dimwit says she was fooled.