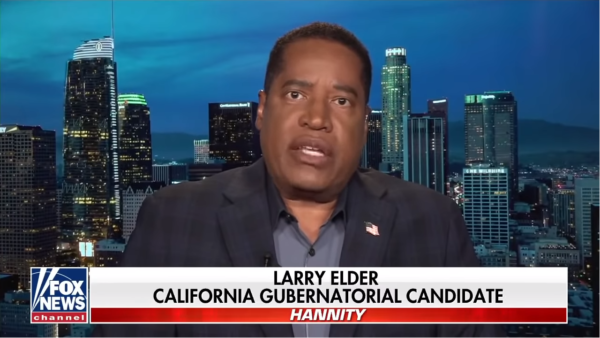 Los Angeles County Sheriff Alex Villanueva says he plans to investigate an attack on California gubernatorial candidate Larry Elder, the black conservative talk host who is in position to replace far-left Democrat Gavin Newsom if the governor is recalled in the upcoming election.  woke privilege

A white woman wearing a gorilla mask was captured on video throwing an egg at Elder as he walked down a street during a campaign appearance in Venice Beach. According to the Washington Examiner, the woman then slapped a security guard.

Sheriff Villaneuva reportedly plans to investigate the attack as a hate crime.

“QUESTION: How is this not a hate crime?

“ANSWER: Because “woke privilege” means a white woman can wear a gorilla mask and attack a black man without fear of being called a racist. Where is the outrage from our politicians?”

Sheriff Villaneuva is a Democrat.

QUESTION: How is this not a hate crime?

ANSWER: Because “woke privilege” means a white woman can wear a gorilla mask and attack a black man without fear of being called a racist.

The unidentified crazy gorilla woman can be seen on a video riding up to Elder and several other people on a bicycle as she pitched the egg, which narrowly missed the candidate’s head.

California Democrats have been smearing Elder as his campaign has gained momentum. He has been called “the black face of white supremacy.”

Upon seeing a white woman in a gorilla mask attack a black candidate, the liberal MSM totally ignored the incident.

Elder is pro-Second Amendment. He doesn’t agree with Newsom or Joe Biden. He takes issue with liberal Democrat policies. He’s a lightning rod for controversy and has appeared frequently on Fox News, which liberals consider an outrage.

Newsom “appears to have favorable odds ahead of the state’s recall election next week, according to a poll released Friday,” according to Fox News. The recall election is Tuesday, Sept. 14, so this is coming down to the wire, and the attack on Elder could create a conservative push at the polls.

According to the survey done by the University of California at Berkeley Institute of Governmental Studies, “only 38.5% of those surveyed support efforts to recall Newsom, while 60% stated they oppose the move. Of those who took part in the questionnaire, only 1.5% had yet to make up their minds on how to vote in the election.”

If Elder does achieve an upset, he will have the opportunity to reverse many of Newsom’s policies and put some brakes on the state’s Democrat-dominated Legislature. And if elected, he might even get the MSM to care about attacks on African Americans who are conservative.