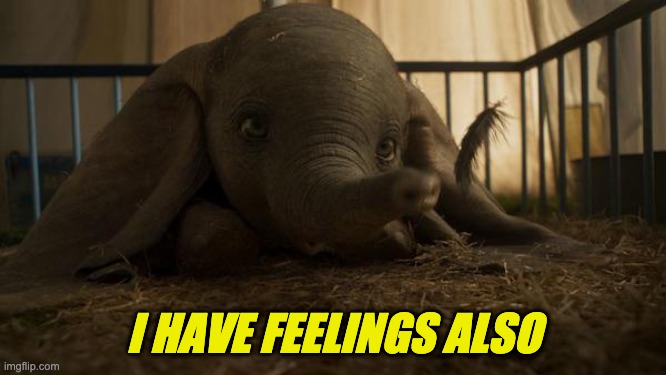 Disney has decided to continue walking down the “woke” path, attempting to stay relevant so they can milk the rest of humanity for all the dollars possible by tossing some disclaimers on several classic films warning that some scenes in the movies contain “negative depictions” and “mistreatment of people or cultures.”

But who knew elephants were insulted. Good grief.

If Disney didn’t own two-thirds of the world at this point, it would become obvious that making this choice to “go woke” would result in the company “going broke,” but since they do seem to have their hand in everything, nothing is going to come of them doing this.

“These stereotypes were wrong then and are wrong now. Rather than remove this content, we want to acknowledge its harmful impact, learn from it and spark conversation to create a more inclusive future together,” says the 12-second disclaimer, which cannot be skipped.

“As part of our ongoing commitment to diversity and inclusion, we are in the process of reviewing our library and adding advisories to content that includes negative depictions or mistreatment of people or cultures,” the site says. “We can’t change the past, but we can acknowledge it, learn from it and move forward together to create a tomorrow that today can only dream of.”

Disney went on to explain the reason for slapping the warnings on the content:

“The crows and musical number pay homage to racist minstrel shows, where white performers with blackened faces and tattered clothing imitated and ridiculed enslaved Africans on Southern plantations. The leader of the group in Dumbo is Jim Crow, which shares the name of laws that enforced racial segregation in the Southern United States. In “The Song of the Roustabouts,” faceless Black workers toil away to offensive lyrics like ‘When we get our pay, we throw our money all away.’”

“The film portrays Native people in a stereotypical manner that reflects neither the diversity of Native peoples nor their authentic cultural traditions. It shows them speaking in an unintelligible language and repeatedly refers to them as ‘redskins,’ an offensive term. Peter and the Lost Boys engage in dancing, wearing headdresses and other exaggerated tropes, a form of mockery and appropriation of Native peoples’ culture and imagery.”

Heck, it also stereotypes fairies and parents.  They could re-dub the movie and take the word Redskins out and insert the words Washington Football team.

“The pirates who antagonize the Robinson family are portrayed as a stereotypical foreign menace. Many appear in ‘yellow face’ or ‘brown face’ and are costumed in an exaggerated and inaccurate manner with top knot hairstyles, queues, robes and overdone facial make-up and jewelry, reinforcing their barbarism and ‘otherness.’ They speak in an indecipherable language, presenting a singular and racist representation of Asian and Middle Eastern peoples.”

Who knows, maybe they are speaking Klingon.

And that, folks, is just a sample–it gets crazier. The disclaimer also directs viewers to a website titled “Stories Matter,” which says, “Because happily ever after doesn’t just happen.”

Oh great. Is Disney going to send kids to a site that shows Cinderella’s sisters slicing off parts of their feet to fit in the glass slippers? Prince Charming arrested for kissing Sleeping Beauty while she was out cold? Tinkerbell dying? Someone stepping on Jimny Cricket? Donald becoming roasted duck?

Enough is happening in the world that we don’t necessarily need to take some of our kid’s favorite fables and send them to a website so they can have a dark ending. Movies are supposed to be an escape. These movies are fantasies. In fantasies, happy endings can happen.

This move is so un-Disney.