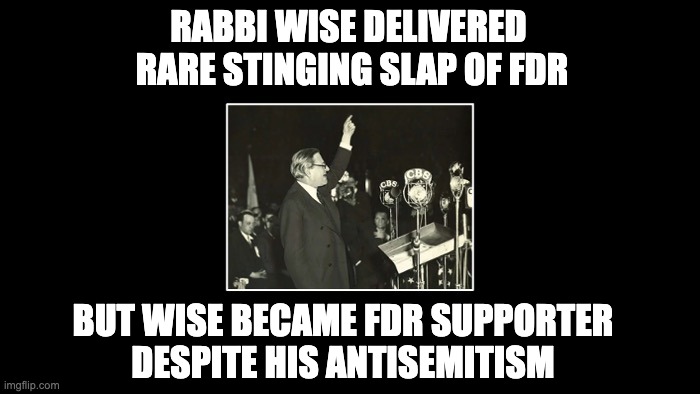 Rabbi Stephen S. Wise, the foremost American Jewish leader of the 1930s and 1940s, is widely remembered as a staunch supporter of President Franklin D. Roosevelt. But on Rosh Hashana in 1935, Rabbi Wise delivered a stinging public critique of FDR.

What could move Roosevelt’s most devoted Jewish supporter to boldly challenge the president whom he so deeply revered?

This remarkable episode began on July 26, 1935, when a German ocean liner, the S.S. Bremen, sailed into New York’s harbor, proudly flying the flag of its country—the swastika flag, the notorious symbol of Adolf Hitler’s Nazi regime. That evening, as the crew and passengers enjoyed an onboard party, several thousand anti-Nazi protesters gathered on the dock.

Trouble was brewing. The New York City Police Department alerted the Bremen’s security officer that some of the demonstrators had sneaked aboard, “accompanied by well-dressed women,” Peter Duffy writes in his book, The Agitator. One of the protesters, William Bailey, climbed up the mast pole, tore off the swastika flag, and hurled it into the water below. Bailey and five others were arrested.

The six defendants appeared before New York City Magistrate Louis Brodsky on September 6. Since Bailey and company had been caught red-handed, there was every reason to expect they would be convicted. Yet Judge Brodsky dismissed the charges—because tearing down the Nazi flag was justified.

It was the S.S. Bremen that was guilty, the judge declared. The ship had engaged in “gratuitously brazen flaunting of an emblem which symbolizes all that is antithetical to American ideals.” Hitler’s ship was the equivalent of “a pirate ship with the black flag of piracy proudly flying aloft,” Brodsky ruled.

Hitler’s ambassador in Washington, Hans Luther, demanded an official U.S. government apology. And he got one. Secretary of State Cordell Hull sent the Hitler regime a note expressing “regret” at Judge Brodsky’s ruling.

Many American Jews, including Rabbi Wise, were shocked and dismayed by the Roosevelt administration’s action. When Rosh Hashana arrived later that month, Wise rose to address his congregants at Manhattan’s Free Synagogue and, for the first—and sadly for the last—time, publicly challenged FDR’s policy concerning the Nazis.

Wise told his congregation that the “horror” of the Nazis’ recent adoption of anti-Jewish laws “was made more full of horror by the act of our own government in apologizing with exaggerated profuseness and abjectness to the Nazi regime for a word of disrespect and contempt for that regime, uttered in the course of a judicial decision from the bench of the lower criminal court of our city.”

“Such apology would have come more fitly,” Wise continued, “if our government had ever uttered one brave word in condemnation of the program and the practices of the Nazi regime.”

Wise was referring to the fact that President Roosevelt had not uttered even “one brave word” against the Nazis’ persecution of the Jews since Hitler’s rise to power two years earlier. And that silence would continue: during the entire period from 1933 until after the Kristallnacht pogrom in late 1938, FDR never publicly criticized Hitler’s anti-Jewish policies.

The reason for President Roosevelt’s silence was that he was keenly interested in maintaining friendly diplomatic and economic relations with Nazi Germany. That was a higher priority for the Roosevelt administration than Hitler’s persecution of the Jews or the Nazis’ aggressive actions against Germany’s neighbors.

That’s why Secretary Hull apologized to the Nazis again in 1937 when New York City Mayor Fiorello La Guardia called Hitler a “fanatic who is threatening the peace of the world.” That’s also why President Roosevelt compelled Interior Secretary Harold Ickes to remove critical references to Hitler and Nazism from several of Ickes’s speeches in the 1930s. Political expediency trumped all other considerations.

The question is: why was Rabbi Wise willing, in 1935, to challenge Roosevelt’s policy, something Wise had never done previously?

Mostly it was a matter of timing. In the autumn of 1935, Wise had not yet developed the relationship with the president for which he would later become known. The doors of the White House were opened to Wise only in 1936, following the death of FDR’s senior adviser Louis Howe, who disliked Wise.

Rabbi Wise’s personal meetings with the president in 1936 and later changed everything. “Wise was charmed by FDR,” historian Richard Breitman has noted. “Known for his monumental ego,” Rabbi Wise loved being considered “a Washington insider” and enjoyed “the flattering level of familiarity Roosevelt permitted him to enjoy.” Any further criticism of the president would have jeopardized that relationship.

But the charm and flattery were still months away on that particular Rosh Hashana. So on Judaism’s solemn Day of Judgment, Rabbi Wise rendered his blunt judgment on the president’s inexcusable policy toward Nazi Germany. It was a brief expression of boldness that Wise would never repeat.