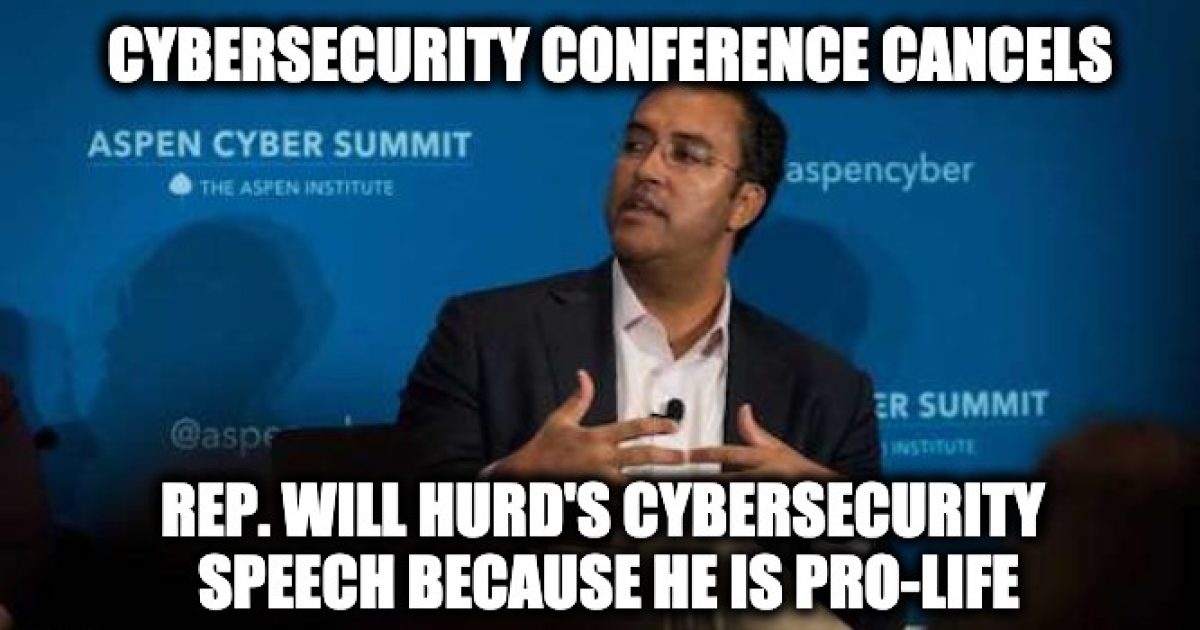 A Republican congressman who is an expert on cybersecurity was kicked out of a Black Hat cybersecurity conference merely because he has a pro-life voting record (Black Hat is an organization that runs information security events here in the US and internationally).

Rep. Will Hurd, an African-American Republican from Texas, had been invited to be the keynote speaker at the Black Hat Conference discuss the cybersecurity bills he has been sponsoring in Congress. But the day after they announced he was speaking the biased, unthinking, leftist tech media found out that Hurd is pro-life, they went wild agitating to have Hurd removed from the conference.

You heard that right… the same tech idiots who whine that there aren’t enough African-American people involved on tech issues kicked one out of a conference because he’s anti-abortion — an issue that has nothing whatever to do with tech.

As soon as it was announced the Congressman was going to speak, liberals in the cybersecurity business went nuts on twitter:

A keynote from a lawmaker who doesn’t believe women should have fundamental human rights is not a great way make women feel welcome in the infosec community. @BlackHatEvents https://t.co/0nFrY30KEF

Strangely the security editor of Tech Crunch objected to an African-American congressman speaking at the conference based on promoting diversity.

Diversity and inclusion is one of the most urgent matters in cybersecurity, but Black Hat seems to be sticking to its decision to allow Rep. Will Hurt to keynote the conference, despite his atrocious voting record on women's rights.https://t.co/1uLWMKM4an

.@BlackHatEvents as one of your speakers this year, I'm begging you to change the keynote speaker. @HurdOnTheHill believes that I don't deserve the basic human right of bodily autonomy. Also, he voted AGAINST restoring NET NEUTRALITY protections in April. AGAINST NET NEUTRALITY. https://t.co/tDW9CS22qS

And there were many others.

Soon after the Twitter eruption, Black Hat announced they were rescinding their invitation:

“Black Hat has chosen to remove U.S. Representative Will Hurd as our 2019 Black Hat USA Keynote. We misjudged the separation of technology and politics,” said a statement. “We will continue to focus on technology and research, however we recognize that Black Hat USA is not the appropriate platform for the polarizing political debate resulting from our choice of speaker.”

In other words, they were saying they thought their attendees were adult enough to allow one of the few members of Congress to understand cybersecurity to speak about the subject. Instead, they freaked out about because they disagreed with him about a topic he was not going to talk about. So to stop their whining, we withdrew our invitation.