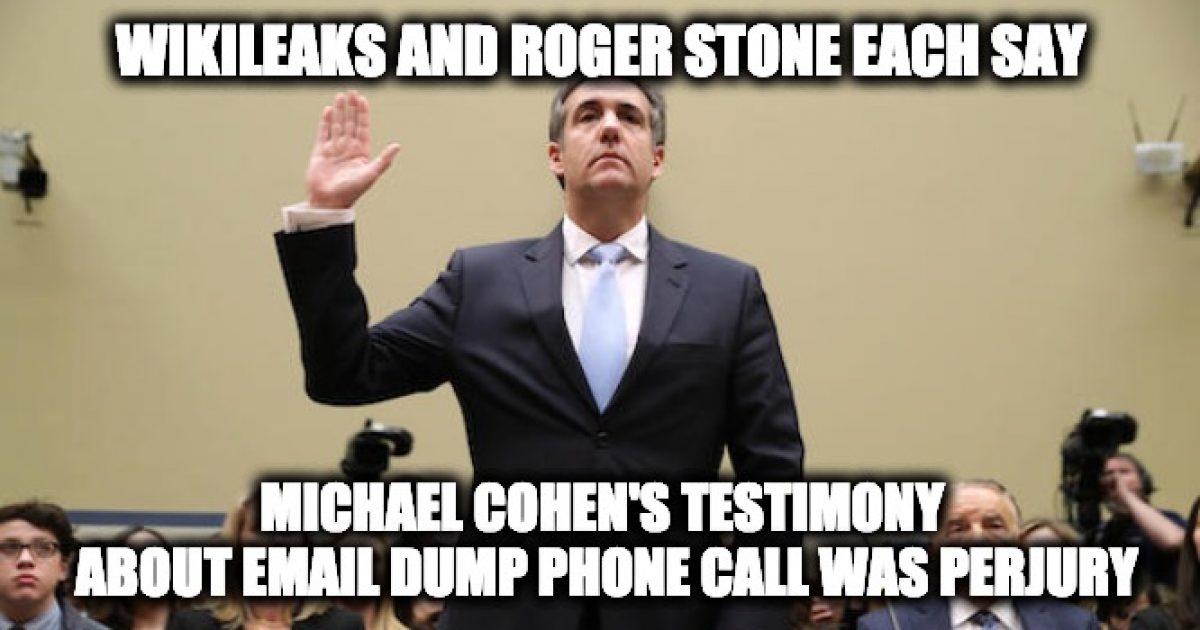 For those of you who suffered through Michael Cohen’s testimony. The president’s former fixer testified that he was in then Candidate Trump’s office and heard a phone call between Roger Stone on speaker phone and Trump. Cohen said he heard Roger Stone tell the future President that he had spoken by phone with Julian Assange and that the Clinton email dump was coming. But Wikileaks and Roger Stone both say Cohen is lying.

As part of his opening statement, Cohen said

As I earlier stated, Mr. Trump knew from Roger Stone in advance about the WikiLeaks drop of emails.

In July 2016, days before the Democratic convention, I was in Mr. Trump’s office when his secretary announced that Roger Stone was on the phone. Mr. Trump put Mr. Stone on the speakerphone. Mr. Stone told Mr. Trump that he had just gotten off the phone with Julian Assange and that Mr. Assange told Mr. Stone that, within a couple of days, there would be a massive dump of emails that would damage Hillary Clinton’s campaign.

Mr. Trump responded by stating to the effect of “wouldn’t that be great.”

Soon after Cohen published his opening statement which included the fake claim about Stone and Assange, Wikileaks sent out a tweet that hit the B.S. button, they say they never spoke to Roger Stone.

Here’s the real truth, everyone who was paying attention knew that Wikileaks was about to dump the Hillary e-mails because Julian Assange said so publicly on June 12, 2016, “Julian Assange, founder of Wikileaks, said on Sunday that the journalist organisation is planning to release upcoming leaks in relation to US presidential hopeful Hillary Clinton.”

According to Buzzfeed news

Roger Stone pushed back against Michael Cohen’s claims that Stone told Trump in July 2016 that he had spoken to WikiLeaks founder Julian Assange about an email dump that would hurt Hillary Clinton’s campaign, saying in a text message to BuzzFeed News: “Mr. Cohen’s statement is not true.”