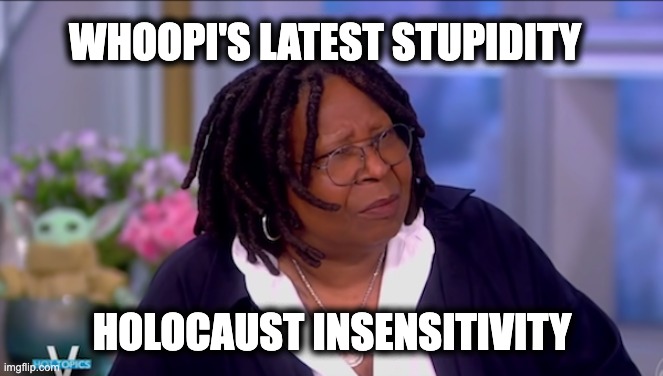 On the last day of January 2022, Whoopi Goldberg did it again. She said something so stupid that one has to believe her IQ was lower than a piece of paper. She basically classified the Holocaust as white on white crime. What she was implying is that Jews were not the victims of the Holocaust. It was just a war between Jews and Nazis. Jews could not be victims because they were just another kind of caucasian.

It started with the View hosts discussing the removal of the graphic novel about the Holocaust, Maus, from a school in Tennessee. All four hosts agreed that the book shouldn’t be removed. Three hosts thought that the book should stay because it teaches kids about the Holocaust. Goldberg responded,” Well, this is white people doing it to white people. So, this is y’all go fight amongst yourselves, but, you know.”

The longer the conversation continued,  the more imbecilic Whoopi got.

Goldberg: Well also, if we’re going to do this, then let’s be truthful about it because the Holocaust isn’t about race.

Goldberg: No. It’s not about race.

Behar: What is it about?

Goldberg: It’s about man’s inhumanity to man. That’s what it’s about.

No Whoopi it’s about man’s inhumanity to Jews, something that’s been going on since Pharoah enslaved the Jews. The Holocaust is unique in its volume and horrors and is a singular event in world history. Yes, there are genocides of other people and other horrors. There were even other atrocities committed against the Jewish people.   But generally, a genocide is waged to suppress a group, take their territory, for political reasons, or some economic reason like taking their wealth or enslaving a people. This was different– the Jews targeted by Hitler and the Nazis had no land and held relatively little power. The Nazis who were engaged in the genocide of Jews had only one purpose, to wipe them off the face of the Earth.

The Nazis believed that the Jews were evil and inferior race.

Goldberg: To learn about man’s inhumanity to man however it exposes itself. I have to cut you off.

No Whoopi read a history book. If you can read.

Whoopi’s comments were probably not based on Antisemitism. More likely is that she believes nothing can be racist unless it involves African-Americans who are descendants of Slaves. Well, that and a huge helping of stupidity.

Besides being hurtful to people whose families suffered through the Holocaust, because of her last name, people will believe her imbecilic statements were made by a Jew,

Whoopi Goldberg is a stage name. Her birth name is Caryn Elaine Johnson – in other words, despite using the stage name Goldberg she isn’t, nor has she ever been Jewish. Using that stage name, some people blame her stupidity on the Jews.

And because of her stage name, every time she says something idiotic, the Jews get blamed.

In the interest of tolerance and preventing Anti-Semitism, I believe that Ms. Goldberg should remove the cultural appropriation and change her stage name.

The Jews are supposed to be the “chosen people,” but it’s time for Whoopi to choose someone else for a change. The Jews already have their fair share of famous embarrassments. Do you realize how hard it is every Father’s Day for Jews to see Woody Allen walk around with his wife/daughter? We get stuck with Senator stolen valor Richard Blumenthal (D-CT). We’re also stuck with Chuck Schumer, who would throw a relative off a cliff if it meant he could get one more vote. And don’t forget he wears his glasses like a 99-year-old schoolmarm. And Jerrold Nadler, who can forget the time he went to McDonald’s and got stuck in one of the golden arches. They had to lure him out with a Ring Ding. We also have to take the blame for the obnoxious half of Geraldo Rivera and all of Bernie Sanders!

For heaven’s sake Ms. Johnson, please get rid of the Goldberg!!

Come on, Whoopi, why pick on the poor Jews? Try one of these names on for size:

Hey, I got an Idea! Why don’t you change your name to Whoopi Ayatollah Seyyed Ali Khamenei? It fits nicely; they could even call you Supreme Leader of the View. In Iran, they call Khamenei supreme leader. Heck, you make that name change, Joe Biden will bow down to you and give you anything you want. Wouldn’t that be cool? Give it a try! Or try anything else! But lose the Goldberg.

Whoopi, today you proved you know nothing about Jewish History. You showed you have no feelings about the six million Jews killed during the Holocaust and the hundreds of thousands of others who survived but lived through unbearable torture.

You see, Whoopi, the Jewish people are a unique nation. People who have stuck together despite millennia of hatred cast at us. So PLEASE change your stage name. Your stupidity gives haters another reason to hate the Jews.

UPDATE: Caryn Johnson issued an apology to those whose feelings were hurt. Obviously. she wrote the below because the network suits told her to.  And as to her line about always giving the Jewish people her support then why did she support Mel Gibson after he made bigoted remarks about many different ethnicities including Jews. She apologized for that one also. 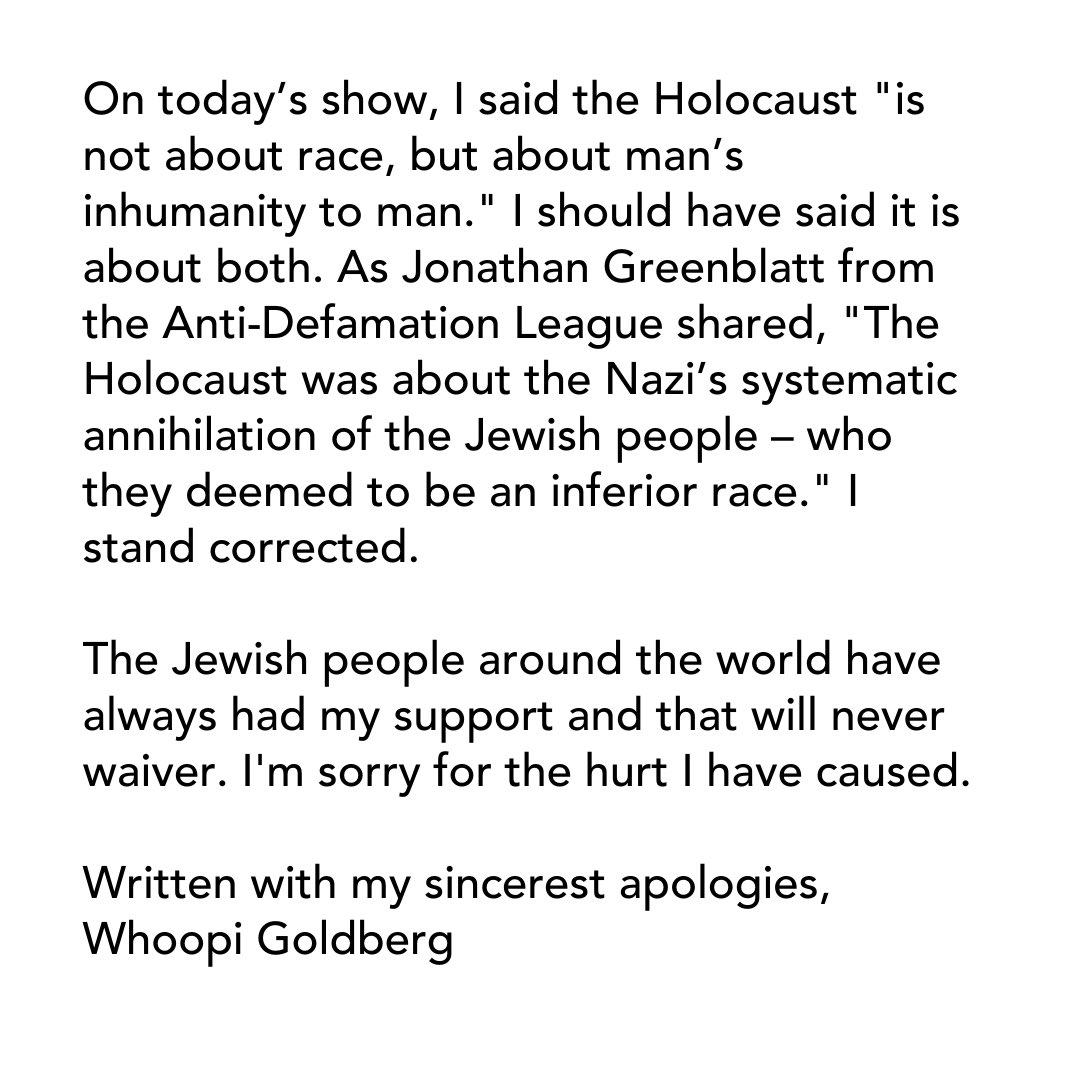 And make sure to read Ed Morrissey’s take on the Jews are a race at Hot Air.

A video of the entire Maus/Holocaust conversation follows: