Dear Rich White Parents: Keep Your Kids Out Of Ivy League Schools To Make Room For POC, OR ELSE! 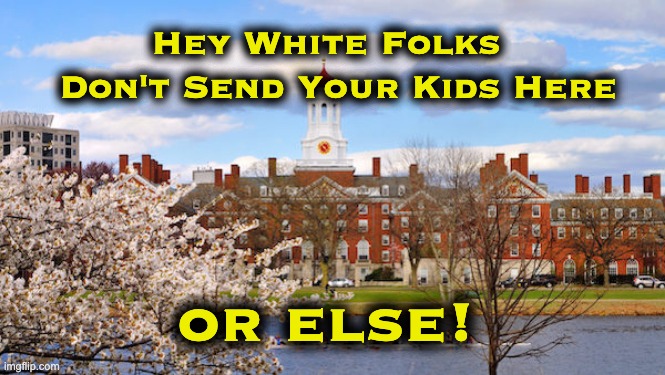 On Sunday, Kathleen McKinley, a political blogger for the Houston Chronicle, according to her Twitter bio, posted a letter reportedly sent to white liberal parents in the Highland Park, Texas area from a group called “Dallas Justice NOW.”  Simply put, the letter demands the parents pledge to keep their children out of Ivy League schools or US News & World Report Top 50 schools to make room for black and Latino students.  whites Ivy League schools

“I’m dead right now. Highland Park is one of the richest areas in Texas. These Democrat parents would walk across hot coals & plan a murder for the chance their kids go to an Ivy League or other top schools. Then they get this from a Black Lives Matter Organization,” she wrote.

I’m dead right now. ?Highland Park is one of the richest areas in Texas. These Democrat parents would walk across hot coals & plan a murder for the chance their kids go to an Ivy League or other top schools. Then they get this from a Black Lives Matter Organization. ???? pic.twitter.com/WlmxNRiPco

To Our White Allies:

Talk is not enough. Commit yourself towards taking action and making sacrifices to correct centuries of injustice. Open up spaces for Black and LatinX communities by refusing to send your kids to Ivy League and US News & World Report Top 50 schools and encourage friends, neighbors, and family members to do the same. Imagine if those hundreds of thousands of spots at these institutions were occupied only by marginalized communities. Imagine the opportunities. We can achieve true equity within our lifetimes but only if white folks are willing to sacrifice their privileges.

As a white person with privilege both from my whiteness and my neighborhood I recognize the need to make sacrifices for the purpose of correcting hundreds of years of murder, slavery, discrimination, and lack of educational and economic opportunities perpetrated upon people of color. I understand that access to top schools is a key component in economic and social advancement. Therefore, I commit that my children will not apply to or attend any Ivy League School or US News & World Report Top 50 School so that position at that school is available for people of color to help correct historical wrongs.  If I do not have children under 18 then I will commit to encouraging my white privileged friends, neighbors, and family members with children to sign the pledge and holding them accountable until they do so.

Have you been asked to take the pledge? Don’t be a racist hypocrite. Sign the pledge today!
Sincerely,

And if that’s not enough, the group goes on to state:

Please note Dallas Justice Now will be publicly announcing the names of those who have and have not signed the pledge.

Something about that seems just a bit creepy, if not downright illegal. But at least they said please.

In other words, you either agree to their demand, or you’re a racist hypocrite.  And the group promises to make your name public either way.

So far, there are no names of wealthy white liberals who have signed the pledge listed.

Something tells me this isn’t going to go very far…