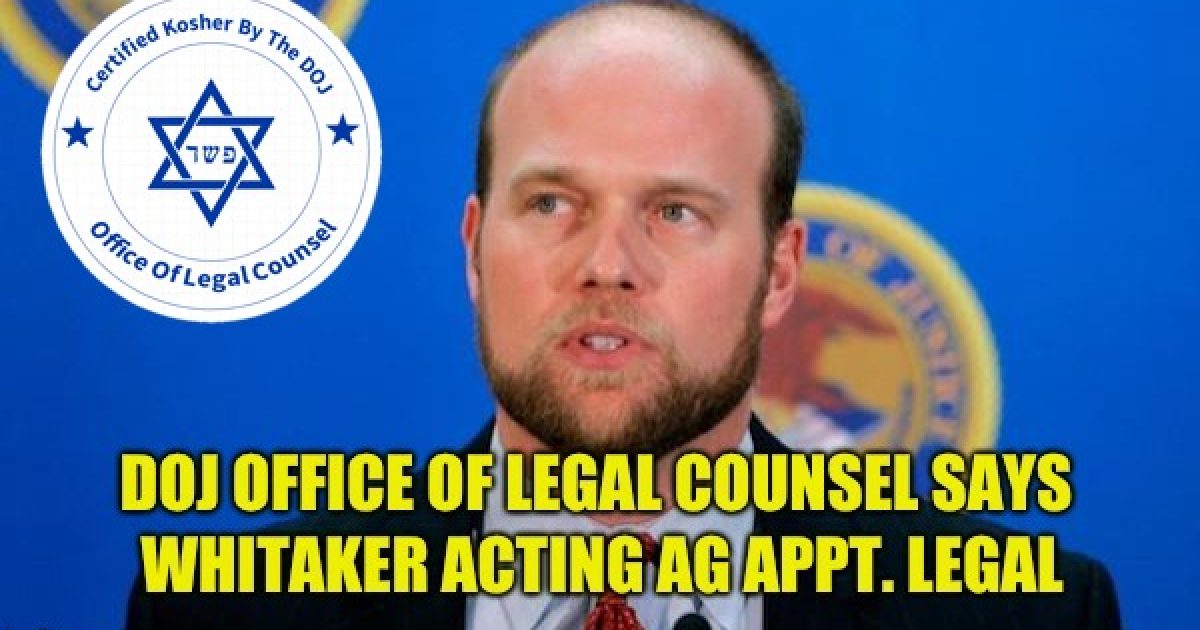 The Department of Justice Office of Legal Counsel (OLC) issued a legal opinion saying President Trump’s appointment of Matthew Whitaker as acting attorney general is constitutional. In the opening line of the opinion the OLC says Trump-appointed Whitaker under the Federal Vacancies Reform Act of 1998, and further reveals, “This Office previously had advised that the President could designate a senior Department of Justice Official, such as Mr. Whitaker, as Acting Attorney General.”

The document (embedded below) then offers twenty pages of reasons why the appointment is consistent with the Constitution, federal statutes and past precedent including

The Office of Legal Counsel is one of the most powerful arms of the Justice Department so if they put the kibosh on the appointment it would have been hard for the president to keep fighting the Democratic loyalists and liberal State AG who claim the appointment was unconstitutional and the state of Maryland challenged Whitaker’s appointment, saying the POTUS ignored the Constitution and that Deputy Attorney General Rod Rosenstein is Sessions’ rightful successor.

Liberals in government and the mainstream media seemed to be the only ones surprised that President Trump got rid of Sessions immediately after election day. And anticipating their objections President Trump checked with the OLC what were the laws of appointing an acting AG before he appointed Whitaker. Obstructionists in Congress, as well as eighteen state attorneys general, have taken issue with Whitaker’s appointment, calling for him to recuse himself from overseeing the Russia probe, and Whitaker has asked the DOJ Professional ethics group to advise him.about the Muller probe.