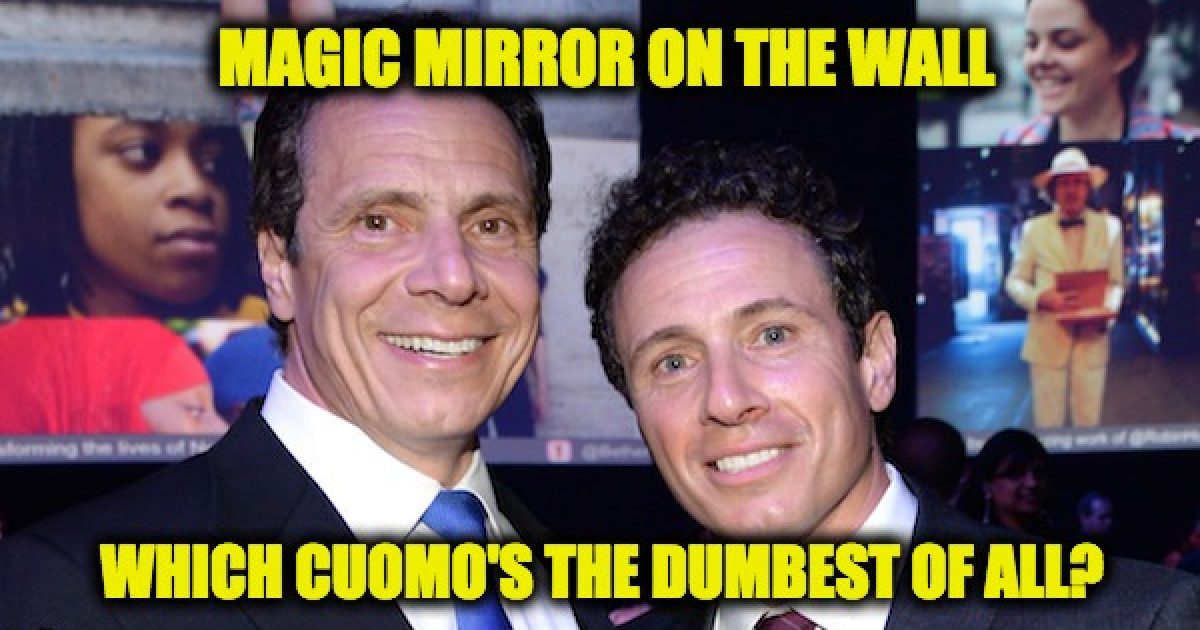 Sometimes two brother’s have a friendly competition. For example, sometimes my brother and I compete who can tell the sarkiest joke. Here in New York TV host Chris Cuomo and his brother, despotic  New York Gov. Andrew Cuomo compete to see who is the biggest imbecile. Last week CNN’s Chris Cuomo defended the Violent Antifa despite the fact they were violent toward his fellow members of the press saying, “all punches are not equal.” I suppose that’s just as true as “all brain cells are not equal.” And as if to prove it, Chris’ brother Andrew set out to prove that his brain cells were weaker than his brother Chris’ feeble frontal lobe.

During a bill-signing in New York, the tyrannical Cuomo who is rumored to be running for POTUS in 2020 tried to trash President Trump’s “Make America Great Again” slogan with a strange line, “We’re not going to make America great again. It was never that great,”  The crowd gasped,

Why would he want America to be fully engaged? I for one am happily married and have no desire to get engaged again. 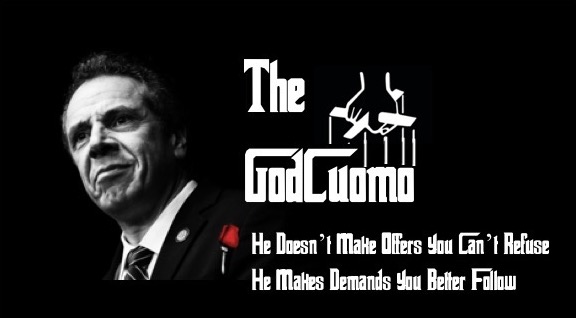 Sorry, Don Cuomo, I will grant you that since New York came under the control of your organization it has taken one giant step backward, but as far as the United States of America goes it is and has been the greatest nation on Earth. Even under Obama when we lost some of our personal freedoms and his lead from behind philosophy made us a laughing stock and Obamanomics which crapped out the economy—even though all that America was still great. Just not as great as we used to be.

Eventually, Cuomo’s spokesman tried to walk back his statement.

The Governor believes America is great and that her full greatness will be fully realized when every man, woman, and child has full equality. America has not yet reached its maximum potential,” Cuomo’s press secretary, Dani Lever, said in a statement. “When the President speaks about making America great again – going back in time – he ignores the pain so many endured and that we suffered from slavery, discrimination, segregation, sexism and marginalized women’s contributions. The Governor believes that when everyone is fully included, and everyone is contributing to their maximum potential, that is when America will achieve maximum greatness.”

HUH? Slavery, discrimination, segregation, sexism and marginalized women’s contributions? When did Trump say anything about going back to those “bad old days?” Cuomo’s walk back was the political equivalent of the tagline from “Welcome Back Kotter’s” Andrew Horshak, “Up your nose with a rubber hose.”

“WE’RE NOT GOING TO MAKE AMERICA GREAT AGAIN, IT WAS NEVER THAT GREAT.” Can you believe this is the Governor of the Highest Taxed State in the U.S., Andrew Cuomo, having a total meltdown!

Yep! Total meltdown, like that scene in Raiders of The Lost Ark when the Ark is opened and their faces start melting.

As one expects from Cuomo his statement was hypocritical

Cuomo, in his 2010 announcement video for governor: “Together, we can make New York great again.” https://t.co/AYtroR3Lxs https://t.co/3tWvfuoiLH

Now just because Andrew has shown himself to be dumber than Chris, it doesn’t mean that the CNN Anchor can’t take back the family title.