When Obama Disclosed Israeli Nukes, MSM Didn’t Treat As Major Story Like They Did W/Trump 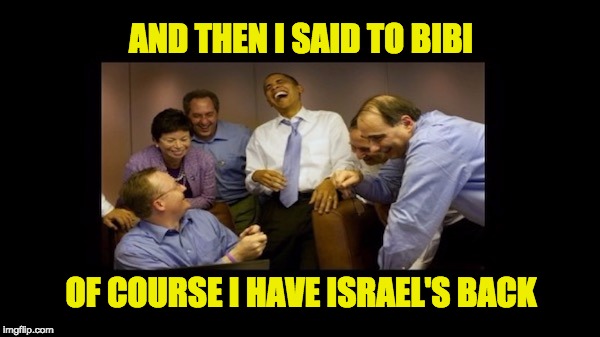 Every president from Eisenhower-Bush #43 knew that Israel had nuclear weapons program and was comfortable with the Jewish State’s intentional ambiguity,  neither confirming or denying their weapons program. That is every president with the possible exception of JFK. It is rumored that he wanted to reveal Israel’s program until then foreign minister Golda Meir promised that Israel would never be the first to introduce nuclear weapons into a war.
It remained that way until February 2015 when President Obama revealed that Israel did indeed have nuclear weapons. And when Obama took it upon himself to reveal one of Israel’s most protected state secrets to the world there was no major MSM craziness as there was with the recent Trump/Russia “classified information” story. Instead they ignored the story when Obama wanted it reported to help him “sell” the P5+1 Iranian nuke deal.

Before the declassification most observers believed that Israel had nuclear weapons, however he Jewish State maintained ambiguity with the hopes that without definitive proof of their capabilities, their enemies could never demand that they disarm. But those same enemies would always fear the possibility that Israel could respond with nuclear weapons.
On February 12, 2015 Obama’s Pentagon declassified a top-secret Department of Defense document from 1987 that detailed Israel’s nuclear program – the first time Israel’s alleged nuclear program had ever been confirmed and that most protected state secret was “outed” by its closest ally the U.S. government.

The release was probably an Obama punishment to Israeli Prime Minister for his upcoming speech to Congress about the Iranian Nuclear deal.  Well one of the punishments. At the same time Obama was outing Israel’s nuke program, he was doing what Russia was accused of doing in the 2016 American Election–Obama was spending U.S. tax dollars in an attempt to defeat Netanyahu in the Israeli election.
Six weeks after the Obama government intentionally spilled the beans about Israel’s nuclear program the Weekly Standard reported that the story was initially ignored by the US and international media, “except for the state-funded Iranian regime station Press TV and the state-funded Russian station RT.”

Both these media were rumored to have been tipped off about this obscure report at the time by persons in Washington. (Both the RT and PressTV stories falsely claim that the U.S. gave Israel help in building a hydrogen bomb. This is incorrect.)

At the same time the magazine revealed:

However, in the past 24 hours several media in the U.S. and elsewhere have now chosen to report on the February declassification by the Pentagon. This coincides with stepped up efforts this week by the Obama administration to weaken Israel’s deterrent capabilities, including leaking to the Wall Street Journal incorrect allegations that Israel directly spies on the U.S.

In other words Obama was trying to make Israel look like a “rogue” regime–just like the Iran government of whom he was trying to convince America were now “nice guys” who would never break the flawed P5+1 nuclear deal.

Herbert London wrote in the Hill:

By publishing the declassified document that specifies Israel’s nuclear capabilities, the U.S. breached a silent, but well understood, agreement….The report also notes the existence of research laboratories in Israel which “are the equivalent of our Los Alamos, Lawrence Livermore and Oak Ridge National Laboratories.”

It is, of course, quite interesting, perhaps revealing, that the declassification has occurred as the Obama administration has tilted away from Israel in written and spoken words. Some have said they have never seen an American document disclosing such extensive information about an ally’s state secrets.

Now lets put this in context. A little more than two years ago, Barack Obama purposely breached an agreement and revealed the most guarded state secret of an important ally. The MSM remained silent until the Obama Administration pushed them to write about the story to help him sell the flawed Iran deal by taking down Israel a few notches. But even when they wrote about it, there was none of the “world is ending because the president is incompetent stories as what happened with president Trump in the past week.

This past Monday an unnamed leaker told the Washington Post that Donald Trump revealed some classifed information to the Russian Ambassador and Foreign Minister without the permission of the country the U.S. got it from. We were told that the way he revealed the information the Russians would be able to figure out where it came from. Apparently the information had something to do with an ISIS plot to use computers brought onto airplanes as explosives. According to the other three Americans in the room, the President’s revelation was proper and it didn’t include anything about sources and methods. Not only did the MSM have a major freak out…but it was the New York Times and the Wall Street Journal revealing that the ally who gave the info to the U.S. was Israel, and now there may be Israeli agents undercover with ISIS who’s lives may be in danger.

In the Obama incident, the MSM played administration lap dog, not revealing the release of Israel’s secret until they could help sell the P5+1 nuke deal. And when they wrote about the declassification..it was calm and without criticism. On the other hand when Monday’s Washington Post revelation didn’t go far enough and was defended by the other Americans in the room, the MSM revealed the details that Trump didn’t tell the Russians, that the intelligence came from Israel.

Now please tell me–when you look at these intelligence releases by American presidents, don’t you think they were covered by the media differently?  Is there any doubt that the mainstream media loved Obama and is biased against Trump?