Remember the Russian Reset? Besides The Clintons Making Money, What Happened? 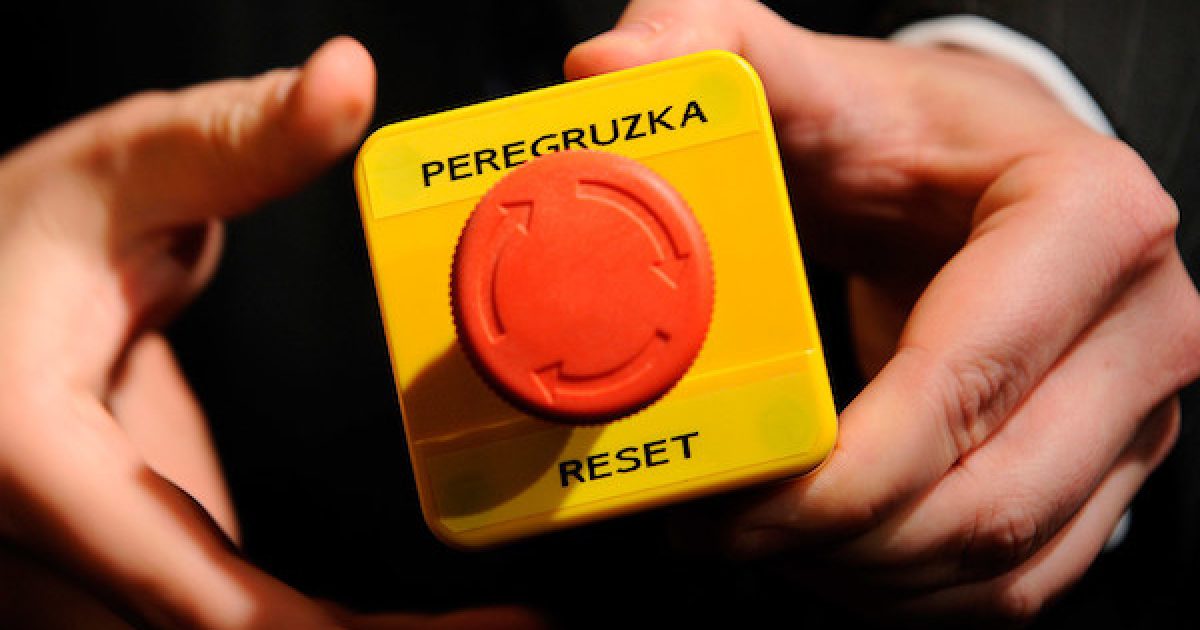 In the run-up to the 2008 presidential election, Democrat candidate Barack Obama and his cronies spent a lot of time arguing that the Bush administration had been too rough on the Russians. During his first term and into his second, Obama bent over backwards to appease the Russians at every possible turn. His Secretary of State, Hillary Clinton was put in charge of he Russian Reset and, even travelled to Moscow with a prop “Reset Button” in an effort to restart diplomatic relations with the Kremlin.

Later, Obama himself was caught whispering promises to Putin’s puppet, Dmitri Medvedev, if the Russians would only play nice.

None of it worked.

Then in 2012, then-incumbent President Barack Obama mocked his GOP opponent, Mitt Romney, for daring to argue that Russia was our #1 geopolitical foe.

Romney wasn’t arguing that Russia should be treated as an enemy, but simply as an opposing force in the world. On trade, international politics, democracy, and even the spread of worldwide civil rights and human rights, Russia is often at odds with the United States and our values.

“This is without question our No. 1 geopolitical foe. They fight for every cause for the world’s worst actors. The idea that he has more flexibility in mind for Russia is very, very troubling indeed.”

When pushed on his severe assessment, particularly with the problems we were having with Iran, China, North Korea, etc., Romney made it clear that he wasn’t calling Russia an enemy, but a geopolitical foe.

“I’m saying in terms of a geopolitical opponent, the nation that lines up with the world’s worst actors, of course the greatest threat that the world faces is a nuclear Iran, and nuclear North Korea is already troubling enough, but when these terrible actors pursue their course in the world and we go to the United Nations looking for ways to stop them, when [Syrian President] Assad, for instance, is murdering his own people, we go to the United Nations and who is it that always stands up for the world’s worst actors? It is always Russia, typically with China alongside, and so in terms of a geopolitical foe, a nation that’s on the Security Council, that has the heft of the Security Council, and is of course a massive security power — Russia is the geopolitical foe.”

In response to Romney’s assertions Obama launched this zinger (which the media loved, but proved who incompetent the Obama administration and the media actually were) at Romney:

“The 1980s are now calling to ask for their foreign policy back because the Cold War’s been over for 20 years.”

Fast forward less than 4 years later and the Democrat establishment is hyperventilating about the Russian threat, something they pretend is as dangerous as it ever was.

Romney wasn’t necessarily wrong back in 2012, the Russians and the Chinese really are our 2 biggest foes, but the Russia threat really is overblown. However, today, the Democrats are wildly inaccurate when they pretend that the Russians are an existential threat to our existence.

In a recent interview with Fox News host Laura Ingraham, Victor Davis Hanson exposed the leftwing hypocrisy and reminded America that we have bigger problems on the horizon than Vladimir Putin and Russia

Laura Ingraham: We talk a lot about this on the radio, but China is slowly amassing a huge band of influence across the globe, in academic institutions. Let’s just start there.

Victor Davis Hanson: China has got ten times the GDP of Russia, five times the population. It is a real threat. [China] is sort of doing what Japan did in the 1930s, with the Greater East Asia Co-Prosperity Sphere, so it goes to these neighbors, the Philippines, Japan, and it says, ‘The U.S. is in isolation, it is on the wane, so cut a deal with us.’

And we used to check that with a huge navy, that was what the American navy did during WW2 and the Cold War, and the navy is down below 300 ships. At the same time we would always triangulate with Russia and say we have issues, you have issues, but we have common ground against radical Islam and we’re worried about China, but we’ve given that card up over this crazy hysteria over Russia.

Laura Ingraham: So talk about why the global elites have flocked to protect China, and now flocked to demonize Russia. [They say] China is good and deserving of our attention, Russia is the real threat. Russia’s economy is smaller than France’s?

Victor Davis Hanson: Remember, Russia wasn’t the real threat, after Bush clamped down on East Asia, Clinton and Obama said you’ve been too hard on Russia, we’re going to reset with the plastic red button from a jacuzzi in Geneva. Romney was the person who was hysterical about the hot mic exchange with Obama about missile defense, and being flexible after the election.

Russia was good, and then suddenly Russia was bad because the narrative changed, and China has always been the obstacle because 1/3 of the world’s trade happens with oil going through the South China Sea, and now they have a valve with the Spratly Islands, they can control it. They could stop North Korea tomorrow if they wanted to.

Actually there was one part of the Russian reset that showed demonstrable results that one Democrat should know about. The Clinton Foundation made some cash from the reset.

Evidence published by Clinton Cash author, Peter Schweizer in a 2016 Wall Street Journal  ( and released at the same time in a report called “From Russia With Money,”)  proved that as part of the “reset” Secretary of State Hillary Clinton oversaw “a major technology transfer initiative” that “may have substantially undermined U.S. national security.” Coincidentally (if you believe in coincidences) the Clinton Family enriched themselves out of the deal. This was all part of the failed Clinton effort to improve relations with Russia that began with presenting Russian Foreign Minister Sergei Lavrov with a button she thought said “reset” in Russian, but it actually said “overcharged.”

A key program of the “reset” was to help Russia develop its own version of Silicon Valley. Called “Skolkovo” and located near Moscow, it  housed technology for developing biomed, space, nuclear and IT technologies. Ms. Clinton’s Skolkovo project helped to develop military technology for what Mitt Romney famously (and correctly) called America’s #1 geopolitical foe, Russia.

Because it involved a sharing of our technology Skolkovo may have created a for Russia a legal way to gain access to America’s classified technology, the kind of access they used to use espionage to access.

To read he full story of Hillary The Clinton Foundation and the Russian reset, please click here.