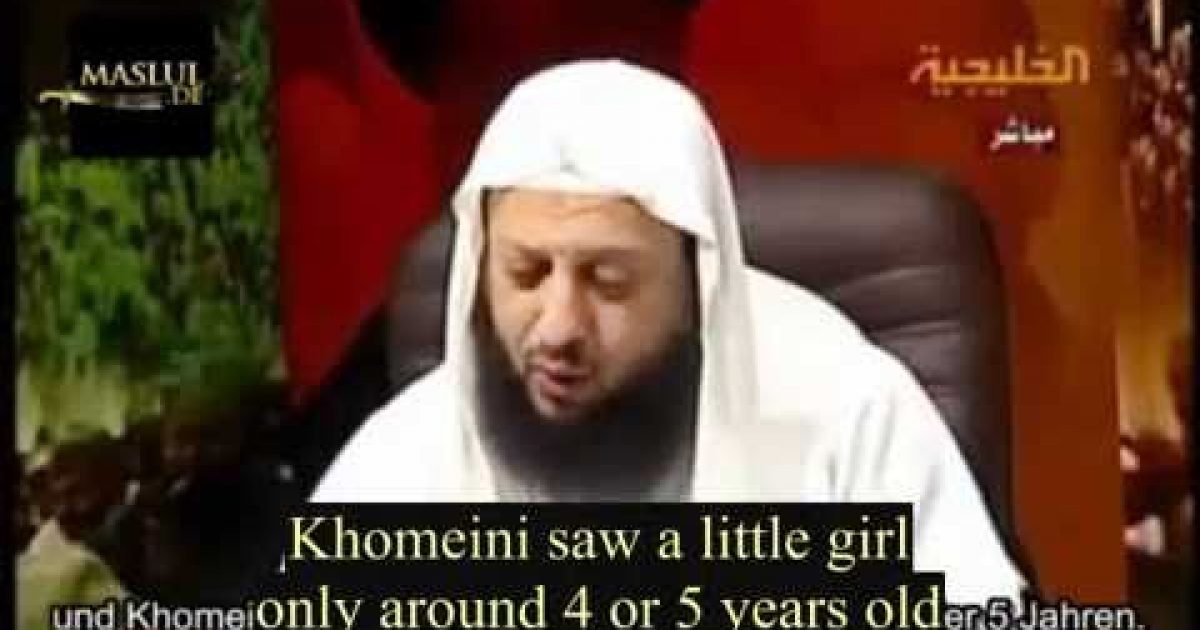 Followers of Muhammad’s actions and instructions hold an entirely different view about marriage, and women, than any other group of people in the world.

Muhammad did everything he specifically permits in the Qur’an, which is why the following behavior is advocated in Islam.

Islamic men, like Muhammad did, can: marry multiple women (4:3), including slaves (4:24), and prepubescent girls (65:4), and beat their wives as a form of punishment (4:34). They can also divorce them for no reason and have greater legal rights than their wives.

Muhammad instructs in the Qur’an that a man must wait to have intercourse with a temporary or permanent wife until she menstruates. Qur’an 65:4 states:

Therefore, it should come as no surprise that Obama’s friend, Ayatollah Ruhollah Khomeini, the Supreme Leader of Iran, argues that kissing, fondling, hugging, and “thighing” (sexual contact inside/on the thigh) young girls is permitted.

“The temporary marriage with her is allowed. But only grabbing, kissing, and sex between the legs (thighing). It is not permitted to have sex with a girl before she is nine-years-old; be it in a permanent or temporary marriage.

“When it comes to the other pleasures such as hugging and sex between the thighs it is no problem even if she is still a baby.”

According to Sahih Muslim 8:3311, Muhammad married his last and favorite wife, ‘A’isha

“… when she was seven years old, and he was taken to his house as a bride when she was nine, and her dolls were with her; and when he (the Holy Prophet) died she was eighteen years old.”

Umar, the second caliph of Islam, married Umm Kulthum when she was allegedly five-years-old according to some sources, or 10-12-years old, according to others. According to Tarikh Khamees (Vol. 2, p. 384, ‘Dhikr Umm Kalthum’) and Zakhair Al-Aqba (p. 168), and that she had “not yet attained the age (of maturity).” He instructed her father to send her to him specifically, “if she is underage.” (And, Ali married his child daughter Umm Kulthum to Umar.)

Pedophilic Islamic marriages, including forced marriages, are most prevalent in Pakistan and Afghanistan.

The below picture portrays a group of Islamic men accompanied with the child to whom they have been arranged to marry. In the Palestinian areas adjacent to Israel, the little girls are dressed in white dresses, holding the hands of men who are the age of their older brother, cousin, father, uncle, or even grandfather, to whom they are forced to marry. (The girls are holding Palestinian/Hamas flags.)

The International Center for Research on Women now estimates that there are more than 70 million child brides in the world; almost all live in Muslim countries.

Learn more about why no 9 year-olds exist in Iraq and Syria and throughout the Levant, and the institutionalized violence against women and girls worldwide under Islamic rule.