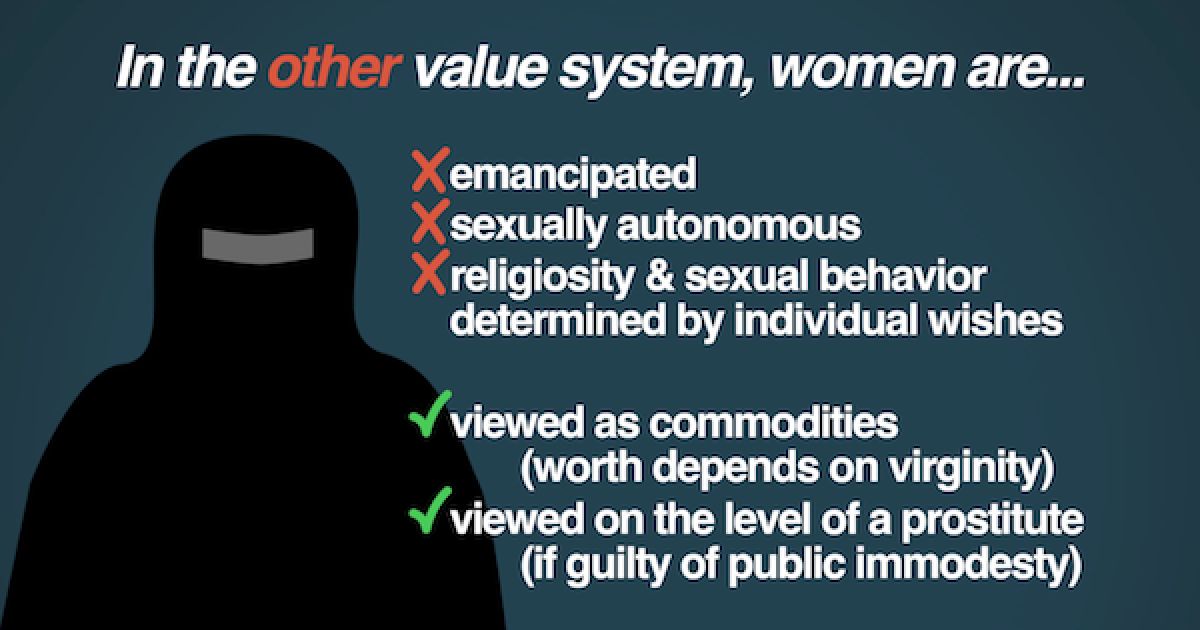 Feminists in the west must hate Muslim women.

The left in America spends so much of its time and energy battling “Islamophobia,” Israel, and conservatives as forces of evil. Oftentimes, they fight so hard against these things that they end up partnering with the Islamofascists who are aligned with Iran, Hamas, Hezbollah, the PLO, the Muslim Brotherhood, and other such organizations. In the West, left-wing feminism is the “Useful Idiot” that Islamist theocrats appreciate the most, because they ignore the plight of Muslim women.

The partnership has become so toxic that in a debate with conservatives you might even hear feminists defending the cultural practices and intolerance of the Muslim world because the greater evil is the “patriarchal” white hegemony in the West. It’s sad, laughable, and suicidal… but the left continues to team with the forces of radical Islam in the fight to destroy the West.

In a video presentation for Prager University Ayaan Hirsi Ali wonders at the suicidal tendencies of Western feminists who would rather destroy the greatest civilization the world has ever seen (the West) than admit that Islamofascism” is worse than the Christian West.

Are women oppressed in Muslim countries? What about in Islamic enclaves in the West? Are these places violating or fulfilling the Quran and Islamic law? Ayaan Hirsi Ali, an author and activist who was raised a devout Muslim, describes the human rights crisis of our time, asks why feminists in the West don’t seem to care, and explains why immigration to the West from the Middle East means this issue matters more than ever.

Transcript from Prager U:

Culture matters. It ‘s the primary source of social progress or regression. Nowhere do we see this more clearly than in the status of women. The Judeo-Christian culture—and perhaps a more apt word is civilization—has produced over time the law codes, language and material prosperity that have greatly elevated women’s status.

But this progress is not shared everywhere.

There are still hundreds of millions of people that live in a culture—the Islamic, for instance—that takes female inferiority for granted. Until recently, these cultures—the Western and the Islamic—were, for the most part, separated. But that is changing. Dramatically so.

Large numbers of immigrant men from the Middle East, South Asia and various parts of Africa have brought a different set of values to the West, specifically Europe.  More than a million arrived in 2015 alone. More are on the way.

As a result, crimes against girls and women—groping, harassments, assaults, and rape—have risen sharply. These crimes illustrate the stark difference between the Western culture of the victims and that of the perpetrators.

Let me be clear: not all immigrant men, or even most, indulge in sex attacks or approve of such attacks, but it’s a grave mistake to deny that the value system of the attackers is radically different from the value system of the West. In the West, women are emancipated and sexually autonomous. Religiosity and sexual behavior or sexual restraint is determined by women’s individual wishes. The other value system is one in which women are viewed as either commodities (that is, their worth depends on their virginity), or on the level of a prostitute if they are guilty of public “immodesty” (wearing a short skirt for example).

I do not believe these value systems can coexist. The question is which value system will prevail. Unfortunately, this remains an open question.

The current situation in Europe is deeply troubling: not only are Muslim women within Europe subject to considerable oppression in many ways, such norms now risk spreading to non-Muslim women who face harassment from Muslim men.

One would think that Western feminists in the United States and Europe would be very disturbed by this obvious misogyny.  But sadly, with few exceptions, this does not appear to be the case.

Common among many Western feminists is a type of moral confusion, in which women are said to be oppressed everywhere and that this oppression, in feminist Eve Ensler’s words, is “exactly the same” around the world; in the West just as in Pakistan, Saudi Arabia, and Iran.

To me, this suggests too much moral relativism and an inadequate understanding of Sharia law. It is true that the situation for women in the West is not perfect, but can anyone truly deny that women enjoy greater freedom and opportunities in the United States, France, and Finland than they do in Iran, Pakistan or Saudi Arabia?

My perspective is a practical one: any efforts that help Muslim women—whether they live in the West or under Islamic governments should be encouraged. Every effort to pressure these governments to change unjust laws should be supported.

Western feminists and female Western leaders have a simple choice to make: either excuse the inexcusable, or demand reform in cultures and religious doctrines that continue to oppress women.

Nothing illustrates this better than what happened in Cologne, Germany on New Years Eve, 2015. That night, during the city’s traditional celebrations, numerous German women (467 at the last count) reported being sexually harassed or assaulted by men of North African and Arab origin. Within two months, 73 suspects had been identified, most of them from North Africa; 12 of them have been linked to sexual crimes. Yet, in response to the attacks, Cologne’s feminist Mayor Henriette Reker issued an “arm’s length” guideline to women. Just “keep at an arm’s length” distance between you and a mob of Arab men, she advised Cologne’s female population, and you will be fine.

Mayor Reker’s comments underline the seriousness of the problem: a culture clash is upon us. The first step in resolving it is to unapologetically defend the values that have allowed women to flourish. Feminists with their organizations, networks and lobbying power need to be on the front lines on this battle. Their relevance depends on it. And so does the well being of countless women, Western and non-Western.