Dems Are Fighting Trump Moves To Wean Govt. Off of Unnecessary/Duplicate Programs 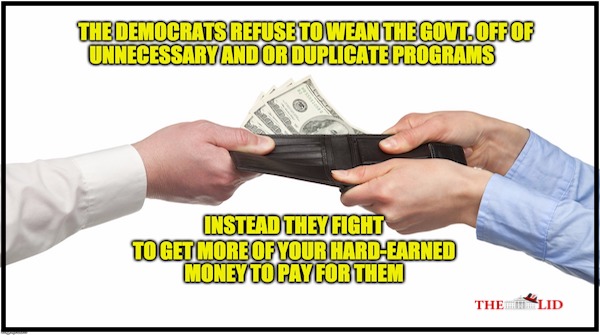 Weaning is when a baby transitions from breast milk to other sources of nourishment. Weaning children from anything is tough. Especially so when they have been drinking breast milk for so long.

According to the American Academy of Pediatrics:

Whenever you decide to wean, your child may have another time in mind. Some children wean themselves earlier than the mother intended and others are resistant to weaning when the mother is ready. Those who are weaned later in life tend to be more resistant. For example, a 2-year-old toddler may be more attached and less flexible about giving up breastfeeding than a 12-month-old baby.”

Sound familiar? Government programs work like this. We decide to help out a certain group or sector of the population. We start a program or short-term fund. When it’s about to run out, it gets extended. Then depending on the Party in power, they feel not enough money is going into that “pet” program, so they create more block grants or another creative program that can kick in. This continues on to the point where these groups stop looking for “outside funding,” “outside grants, “and” other sources” for their sustenance. It’s been a long time coming but it needs to stop.

Let’s start with NPR! I love the arts and music. Many young artists today got their push and passion from programs funded by NPR and other similar organizations. Many current famous Hollywood types scream the praises from the rooftops for these programs. GREAT! Then fund it! You heard me right. Fund it yourself.

The Hollywood elite could easily fund the $147+ million that the government gives them every year. The money the government gives NPR and the arts and endowment groups are used to seed programs, plays, and shows like “Sesame Street” and the play “Hamilton.” Those shows and groups have made millions off of taxpayer-funded programs. “Sesame Street” is worth over $400 million alone! The CEO of NPR gets over $650,000 a year. And the CEO of the Sesame Street brand makes almost $1 million a year. What? No outcries?

When do we get our cut? When does the public see a financial return? It’s time to wean them off the milk and have them look for their own sufficiency.

Now that there are threats of cuts coming, we have all these fake headlines. “Meals on wheels being cut,” “Many federal science programs to be cut,” “Kids in schools will lose their lunch programs,” and “Transportation and security for many government facilities will suffer.” Do Democrats really think this is working?

There are soooo many duplicate or outdated programs that are still receiving money! I have done many shows over the years on grants we give to the dumbest programs. Remember the stress test done on shrimp using a special treadmill? HELLO? And one grant that gave $2.6 million to train Chinese prostitutes to drink more water.

Back in 2014 the government spent over $290 BILLION on programs that were outdated, duplicates, or out-and-out misused to funnel money to pet programs of some elected socialists.

In the 1930 a program called RUS (Rural Utilities Service) was created to help get phones and electricity out to the most rural of areas. It was COMPLETED, but it was not closed. Today it shells out over $10 million a year for green energy research. And you think it’s the only department doing green energy grants? NOPE! There are hundreds.

How about $5 million to the Asian Foundation? One web sites states they are “committed to improving lives across a dynamic and developing Asia.” Congress, over the last 10 years, has directed almost $60 million dollars to this foundation. It has also encouraged the IAF (International American Foundation) to continue to promote grassroots projects in the Caribbean and in Latin America to the tune of over $20 million dollars. Our vets get nothing.

There are 90 early childhood development programs and 75 international education and cultural training programs ALL for kids in other countries.

Since December 2010, the Department of Transportation, as noted in an inspector general’s report, stated that over $2.3 billion in loans have been defaulted on and were made to companies that were NOT solvent when they were made. While they were defaulting, MORE loans were made to help them get current. And this makes sense, how?

The Obama Administration gave a special grant to inner city schools of over $7 billion dollars to help raise the graduation rates in very poor areas. The problem is, he gave it to the same people who were screwing up the system to begin with. The graduation rate didn’t move at all. Don’t we have a department of Education that’s supposed to handle this?

And that’s just a few of thousands of examples of wasted money.

Kids’ meals at schools for families in need are covered by over a dozen different departments. Let’s get it down to one and save the overhead.

The President wants to, stop paying for or managing programs that should be handled by the state and local governments. Programs that could be performed better by private firms. Programs that give money to people or groups or companies that are NOT entitled to the American Tax dollar. Outdated, unnecessary, and duplicated programs that have a staff and resource overhead we don’t need to pay for.

The Rural Housing Service of the U.S. Department of Agriculture was created in 1949 to provide easy low-interest loans to farmers or people living in rural areas to work and grow their farms of companies in those areas producing American goods! Great idea for the time. But it’s now OUTDATED needs to go. They now make government-backed loans to NON-farm households in urban zip codes. AGAIN, that’s not what they were created for. And to add more insult, these people loan out more and more money every year. Last year it was $24 billion and the default rates are over double the national average. WHY? We don’t need them. There are a dozen other programs that are proved by the Feds for housing and lending.

You can’t steal any money if there is no cash flow… I guess.

Change is painful! We need to cut back this crazy spending and the duplicate, outdated, wasteful and fraud-filled departments and programs. Here’s a few more that will nauseate you.

$72 Billion in improper, UNRECOVERABLE payments to vendors and programs. $25 billion a year on a government building we maintain and don’t occupy while spending billions leasing buildings for government workers. How does THAT make any sense?

One grant of $2.6 million was given to train Chinese prostitutes to drink more water. There are no words…

A recent group of Government auditors stated that after examining MANY federal programs over the past 5 years they easily found programs costing the taxpayers over $123 BILLION with no measurable positive impact and approx. another $100 billion in duplicative or fraudulent spending.

Another GAO report found almost 50% of purchases made on government credit cards were improper, fraudulent, or embezzled. Some of the so-called “necessary” items included: gambling, liquor, lingerie, iPods, Xboxes, jewelry, Internet dating services, and Hawaiian vacations. ONE item that really stood out was when the postal service spent over $13,500 on one dinner at Ruth’s Chris steakhouse that included over $3,000 in appetizers and booze with parting gifts of $50 bottles of wine.

GAO said we spend $100s of millions on late fees and penalties because employees don’t get the bills in on time.

In a fraud test last year the Department of Education sent $55,000 in grants for students to a school that didn’t exist!

What I’m saying is this! We need to clean it up. There is simply too much waste. They have been getting away with it for so long that they feel entitled. It needs to stop. You will survive!