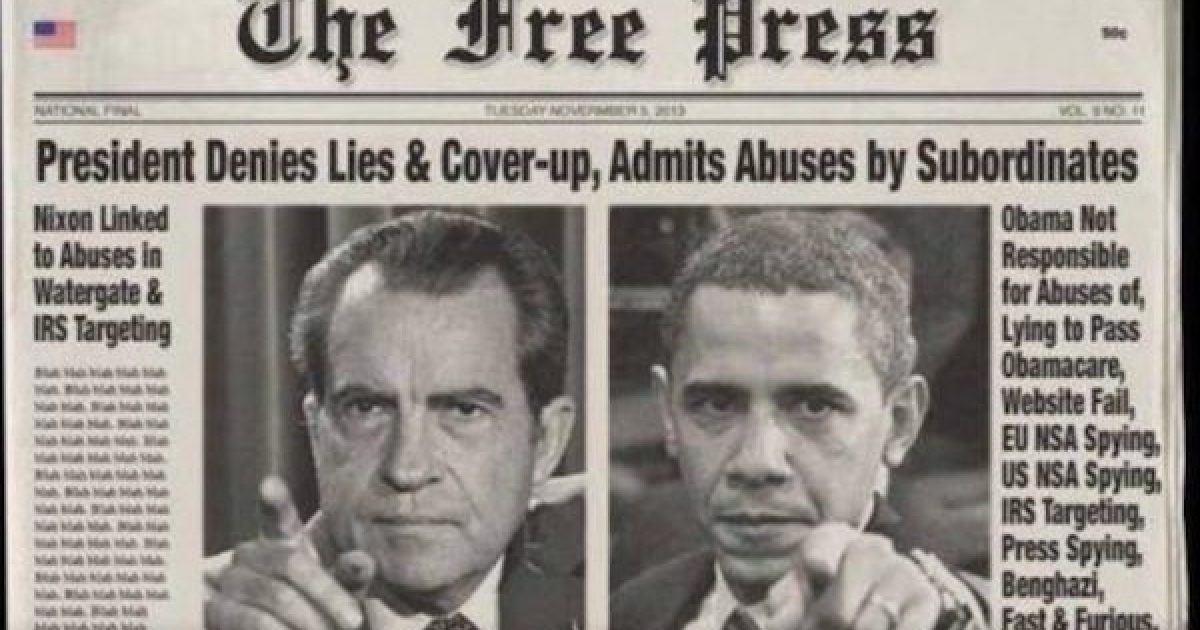 Many reading this may have no clue as to what “Watergate” was. But because of Watergate, Republican President Richard Nixon had been labeled the biggest crook and most corrupt president in history, until NOW!

President Nixon was been involved in and tried to cover up a break in of the Democrat National Committee headquarters at the Watergate complex in Washington DC. Nixon was well-known for being paranoid and for trying to undermine anyone he suspected of being an enemy.

Nixon, like President Trump, was being undermined by Democrat operatives who were stealing information and leaking it to the media. Nixon had a group of men known as the “White House Plumbers” who’s only job was stopping White House leaks.

The Plumbers included people like ex-CIA officer E. Howard Hunt and ex-FBI officer G. Gordon Liddy, among others. The Plumbers were eventually called on to perform other tasks for Nixon… like break in to the DNC HQ, wiretap their phones, and copy some campaign strategy documents. The men were caught. In the subsequent months, Nixon’s attempts to cover up his involvement in it is what took him down.

Nixon was pushing his “men” to lie and do whatever it took to make sure he wasn’t connected to any of it. He also went so far as to erase tapes and destroy notes that may have implicated him.

To sum up, in the end, Nixon had to resign for lying, attempting to cover up a crime, and attempting to wiretap the DNC. Sounds like child’s play compared to the Obama Administration!

The sad part is, Nixon had MAJOR wins on both domestic and foreign policy. He ended the draft, founded the EPA, appointed 4 conservative Supreme Court Justices, gave $100 million to start National Cancer research centers, oversaw an aggressive desegregation of southern schools, signed off on Title9 sports on college campus’ (ensuring women and men have fair and equal access), advocated to lower the voting age, allocated more money for the FBI to fight organized crime, and became the FIRST President to give Native Americans the right to self-identify, return sacred tribal lands to them, and stop forced assimilation.

On the foreign front Nixon sent resources to Israel which Prime Minister Golda Meir said saved her country. Nixon stopped a second potential Cuban missile crisis by taking a hardline stance and not allowing Russia to have a submarine base in Cuba. Nixon established new and stronger relationships in the Middle East basically wiping out soviet dominance in the region. Nixon called for the United States to protect its national interests worldwide by enforcing existing treaty commitments with allies. Nixon participated in talks with the Soviet Union to temper the cold war through diplomacy. He was the first President to visit China where he announced his desire to normalize relations. This was a major tension reliever in the world and brought Russian influence to even a lower point.

Nixon’s negative numbers throughout his presidency was mainly due to the Vietnam War and, later, because of Watergate.

With all his accomplishments, it’s too bad this is all he will be remembered for.

In politics of old, when politicians and parties were doing “questionable” things, or as I call them, “illegal” things, they would try to do it on the sly, in the shadows. Now they just do it in our faces, as if to say “what’re you gonna do about it?”

Starting with President Trump’s State of the Union (SOTU) address and now with the Russian investigation debacle, the Democrats are just doing it in the face of America. And they see nothing wrong with it. Mark my words. The Democrats have HANDED the election to Republicans in 2018. Let me explain.

ONE… Shutting down the government over DACA. Americans, by a large margin, blamed Democrats for that because they want Americans taken care of first. YES, polls show they want DACA dealt with, but not to the detriment of American citizens. Most Americans, even in sanctuary cities, are against sanctuary cities. Democrats are more tone-deaf now than they were in the 2016 elections.

TWO… Russia Russia Russia. Polls show Americans are not concerned with Russia Russia Russia. Yes, they want to know if our elections were tampered with, but not to the detriment of running the government or shutting it down. They want MORE jobs, tax laws shored up, and a REAL, long-term budget. They want regular, common-sense issues dealt with. AGAIN, Democrats ignoring the will of the people.

Democrats sat on their hands during the SOTU rather than applaud a 12 year-old boy who raised the money to buy flags and put them up at a veteran’s cemetery all by himself, and encouraged others to do the same. They refused to applaud the child because Trump introduced him.

Democrats brought illegal aliens to the speech but couldn’t be bothered to invite and fill seats with veterans, wouldn’t stand for the National Anthem, couldn’t applaud and support our National Motto “In God We Trust.” All of that is further proof that they are completely out of touch with the American people.

Now back to Watergate…

Nixon wiretapped and tried to cover up the event. He faced impeachment.
Obama, Clinton, Holder, and Lynch did far worse. Democrats defend and deflect.

First… The Obama FBI/DOJ lied to a FISA judge (yes, knowingly omitting information in testimony is considered lying) to obtain a wiretap on then-candidate Trump’s team, the Trump Towers, and others involved in his election committee. And somehow Watergate is worse?

Second… Lying to the FBI, or any law enforcement agency in an investigation, is a felony. Let me clarify:

18 U.S.C. § 1001 makes it a federal crime for anyone who “in any matter within the jurisdiction of the executive, legislative, or judicial branch of the Government of the United States, knowingly and willfully … makes any materially false, fictitious, or fraudulent statement or representation.”

This same statute has been used to convict and imprison Rod Blagojevich, Scooter Libby, Bernard Madoff, Martha Stewart, and Jeffrey Skilling, to name just a few.

Hillary Clinton LIED about her knowledge of the email server and classified information. But according to former FBI Director James Comey, she didn’t do it with malice. This would be great except James Comey LIED to the investigative committee several times, as well as during his testimony. He knew that he and former Attorney General Loretta Lynch had decided NOT to prosecute Mrs. Clinton, even before they had completed their investigation. And I am SURE Mr. Obama exerted no influence into that outcome, right?

If Michael Flynn, former National Security Advisor under Trump, goes to jail for lying to the FBI, then Mr. Obama, Mrs. Clinton and others need to follow!

It has come through testimony that the IRS was weaponized against conservative groups. Go ahead. Tell me the Obama Administration knew nothing about it.

Susan Rice, former National Security Advisor under Obama, asked for the unmasking of American citizens due to intelligence information received. I am curious as to when the White House became an intelligence gathering agency? She had no reason or need to have that information.

Obama’s Justice Department secretly obtained phone records of several reporters, editors, and journalists. Over 100 media people’s incoming and outgoing calls were traced. WOW! Are there that many spies in media?

CNN / FOX news’ Bob Beckel stated that he was actually contacted by the White House and TOLD to cool down his criticism of the White House, as was Greta Van Susteren. But Obama was a god. So it was OK! Trump says the media is fake and he is chastised for trying to shut down the media!

Inspector General Gerald Walpin exposed Sacramento Mayor Kevin Johnson misusing AmeriCorps federal funding to support certain political activities. Good work, right? Not in the Obama Administration! When Walpin wouldn’t back off the investigation, he was GONE. FIRED! Did I mention, Mayor Johnson was a campaign bundler for Obama.

The Obama Administration lied about the specifics of the Benghazi attack!

Obama paid Iran with a huge pile of cash. He went around Congress. That’s AGAINST THE LAW! And he even admitted to paying them in cash because it was illegal to wire the money directly! HELLO?!?!

Hillary Clinton lied many times to the FBI and in the Congressional hearings. How is she still spending holidays free on the streets?

AND after all this… A dossier filled with fake information, paid for by the DNC and the Clinton campaign, is used to wiretap the Trump team by lying to a judge is fine by the Democrat management and by mainstream media. Nothing to see here. Just move along.

Nixon was a Boy Scout next to the Obama, Clinton, Holder, Lynch Mafia!

Young Not Stupid: My Grandfather's Legacy of Living the American Dream Deserves to Live On
June 21st, 2021 Flag And Cross