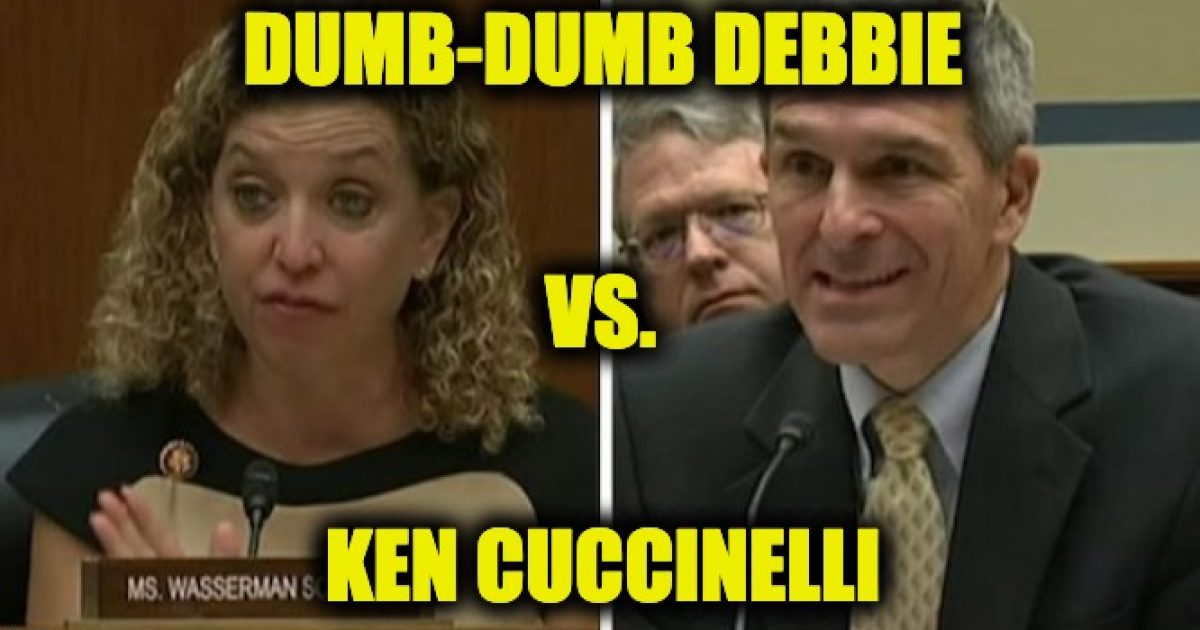 Not known for having a sharp mind (or any mind at all) Rep. Debbie Wasserman Schultz (D-FL) accused acting U.S. Citizenship and Immigration Services Director Ken Cuccinelli of  being a “white supremacist.” The two clashed during today’s House Oversight Committee hearing about the treatment of “migrants.” Wasserman-Schultz Cuccinelli

Dumb-dumb Debbie (also known as Debbie-downer) began her five minutes of questioning with:

Mr. Cuccinelli under your leadership USCIS has actually bragged about systematically restricting legal immigration and I think it’s important for us all to be clear about what you have been aiming to accomplish my constituents Americans across the country aren’t fooled by this administration’s specious attempts to distinguish between documented and undocumented immigration you and Mr. Trump don’t want anyone who looks or talks differently than Caucasian Americans to be allowed into this country.

You want to block all immigration and make life harder for immigrants and you have demonstrated that you will pursue this heinous white supremacist ideology at all costs even if it means making critically ill children your collateral damage in the process and this goes to a comprehensive pattern of harm at USCIS under your leadership in August you announced the administration’s new public charge rule for example. which would deny legal status to immigrants who use social services. Mr. Cuccinelli has USCIS done any analysis of how many children may stop receiving critical services due to fear of losing legal status under this rule? And I’d like you to answer that question please.

WOW after 1:43 of ad hominem attacks, almost 35% of her five minutes Dumb-dumb decided to ask a question, which Ken Cuccinelli agreed to answer but only,  “After declaring that I am not a white supremacist, as you alluded, nor is the president … ”

Wasserman-Schultz agreed adding, “that’s why I am stating them here today,”

The acting U.S. Citizenship and Immigration Services Director“ shot back, “No you certainly are not, you are certainly cloaked in legislative privilege, which means you can get away with not telling the truth,”

The scuttlebutt is that Ken Cuccinelli may be the successor to outgoing Homeland Security Director Kevin McAleenan whose last day is Halloween. Today he proved that he can handle congressional questioning…well at least from the dumb ones.

Note, the transcript above was taken from the video. Below is a video of their entire exchange: