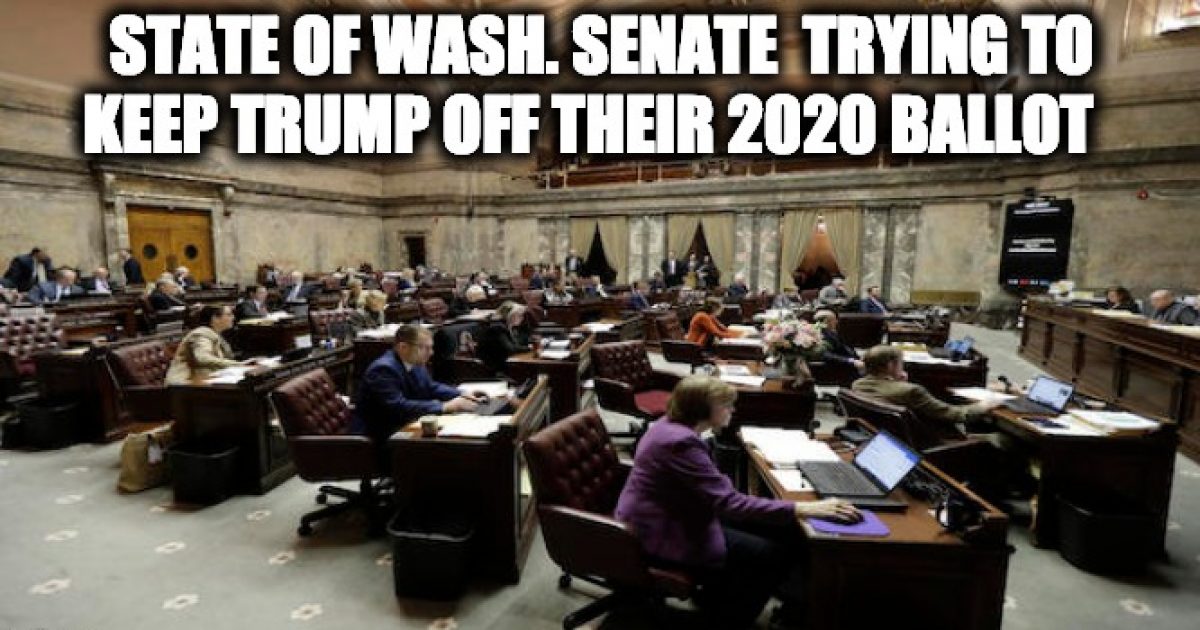 The Washington state Senate passed a bill this week whose purpose is to keep President Donald Trump’s name from appearing on the  2020 ballot. The bill that would require all candidates on the ballot for president to release five years of tax returns before appearing in a state primary or general election.

“Although releasing tax returns has been the norm for about the last 40 years in presidential elections, unfortunately we’ve seen that norm broken,” said bill sponsor Sen. Patty Kuderer, a Bellevue Democrat, during debate Tuesday. Kuderer later confirmed she was referring to Trump.

If also passed by the Washington State House, it would definitely be challenged in federal court.  They have already ruled that states may not enact any requirements on candidates for Senate or Congressional seats. Only the Constitution can levy requirements for those federal offices. But the President may be different because the second paragraph of  Article 2, Section 1, of the constitution may indicate that the states can make their own rules. I am not a constitutional lawyer nor do I play one on TV but this is what it says:

Each State shall appoint, in such Manner as the Legislature thereof may direct, a Number of Electors, equal to the whole Number of Senators and Representatives to which the State may be entitled in the Congress: but no Senator or Representative, or Person holding an Office of Trust or Profit under the United States, shall be appointed an Elector.

Washington’s state Senate passed a bill this week that would drop President Trump from the state’s 2020 presidential ballot until he releases his tax returns.

The bill, which advanced Tuesday to the state’s House of Representatives, according to CBS News, would require any candidate on the ballot for president in the state to release five years of tax returns before appearing in a general or primary election.

Senators voted by a 28-21 margin to approve the bill, according to CBS. The state’s attorney general and solicitor told lawmakers in a letter this week that the proposal likely was constitutional, but analysts expect the law if passed to be challenged in federal court.

It’s good these Liberal states are playing their extra hand early. It gives President Trump time to get this issue before the SCOTUS long before the election. It would also be great to see a  challenge of the laws being passed to subvert the Constitution and the Electoral College. Those small and medium-sized states who want their electors to go to the national popular vote winner are giving up the sovereignty of their citizens and transferring it to big states like California, and New York.  Take away those states in 2016. Hillary loses the popular vote by three million. But more than that for those smaller states, Candidates will only campaign in the big states, besides losing any revenue from campaigning, they also lose any influence on the national agenda.

I am pretty sure that this is not a requirement to be president and doing something like this is an effort to rig a federal election. This is definitely unconstitutional. https://t.co/zIjUgArxIT

Leftist gone wild: Washington Senate passes bill that would keep @POTUS @realDonaldTrump off 2020 ballot unless he releases tax returns. There is no law or Constitutional requirement for this violation of an individual's privacy. #SalcedoStorm https://t.co/Ih0mLjsAPK

Now Lori’s idea I could go for.

In 1984 President Reagan won the state. Actually, Reagan won 49 states. Minnesota which is now the home of Rep. Omar went for the Democrat, Walter Mondale.

Big deal. He doesnt need washington to win. Or cali, or ny, or oregon, or Illinois.

Dan, you never know. He should be allowed to compete in every state and make his own decisions about which states he needs to win.

It’s always been voluntary. More than likely it will be contested and found unconstitutional.

That’s right Bob and the first candidate to do it was Richard Nixon, and in the end, it didn’t help him very much did it?

Parts of this post were first seen at GodFatherPolitics