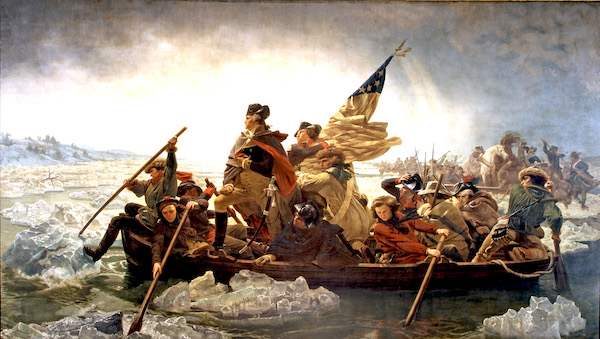 Washington staged the bold and borderline irrational effort to cross an icy river in one night, directly into a severe winter storm of sleet and snow, as a motivational tool.

His troops were in poor shape – suffering from a lack of supplies and a dwindling level of hope.  They had recently lost the Battle of NY and barely escaped capture, escaping Manhattan by boat.

Washington’s Christmas Day crossing the Delaware and surprise attack worked and was a key victory in the American Revolution. The Hessians surrendered before morning.

The crossing and victory are famous—but there are some things about Washington’s first big Revolutionary War victory that you may not know about.

5 Fast Facts You Might Not Have Known About George Washington Crossing the Delaware:

George Washington and his troops had to cross the icy Delaware River three times. The Continental Army crossed on Christmas night and into the following morning, but many people forget they had to cross back over from Trenton into Pennsylvania, this time with prisoners and military stores taken as a result of the battle.

They then crossed again under more treacherous conditions at the end of the year, defeating British reinforcements under Lord Cornwallis at Trenton on January 2, 1777, and defeating his rearguard at Princeton on January 3rd.

In the 1700s, war was fought with very conventional methods. One thing that was not conventional was attacking a superior force, through a life-threatening blizzard!

That is exactly what General George Washington did on Christmas morning, 1776.https://t.co/VXTCMvagi8

General Washington’s original plan of attack involved three separate crossings on Christmas night, but only one actually made it across the river.

Col. Cadwalader was to lead his force of 1,200 Philadelphia militia and 600 Continentals across the river near Burlington, New Jersey. His role was to harass and prevent the British and Hessian units near the town from racing north to support the Hessians at Trenton. Gen. James Ewing’s force of 800 Pennsylvania militia was to cross the river at Trenton and take up defensive positions along the Assunpink River and bridge. Ewing’s soldiers would work to prevent the Hessians from retreating from Trenton.

George Washington’s main force was the only group to manage the crossing the Delaware, but they were still delayed by over three hours. The others were stymied by the ice-choked river.

3. A Spy Warned the British and Hessians of the Surprise Attack

Unbeknownst to Washington, he had a British spy amongst his ranks, who had access to early deliberations about the attack, warning British Major General James Grant.

Grant, in turn, advised the Hessian forces to be vigilant.

Col. Johann Rall according to historians replied, “Let them come … Why defenses? We will go at them with the bayonet.”

It didn’t work out so well for Rall and his forces. Rall was mortally wounded during the Continental Army attack.

Washington's troops preparing to cross the Delaware. Look at the size of the oars. #Christmas #reenactment pic.twitter.com/KbT8QAGG9Q

The weather that night grew ever worse as time moved on, with one soldier recording that “it blew a perfect hurricane” as snow and sleet lashed Washington’s army.

George Washington’s men were suffering from poor morale before the crossing of the Delaware. They were tired, hungry, and hardly clothed for the elements.

By the time Washington and his troops got to the other side of the river, they were a full three hours behind schedule. It was another 10 mile march to Trenton.

With every delay Washington’s fears that his army would be caught in the open magnified. What to do? Contemplating his choices Washington was seen brooding on a crate near a fire. Washington later wrote, when remembering this fateful moment, “…As I was certain there was no making a retreat without being discovered and harassed on repassing the River, I determined to push on at all Events.”

5. The Crossing Inspired One of the Most Famous Artworks in American History, And It Was Painted By A German

The famous Delaware crossing inspired one of the most enduring pieces of art in American history and it was painted by a German artist.

In 1851, German artist Emanuel Leutze painted Washington Crossing the Delaware, a work of art that “became a sensation on both sides of the Atlantic.”

In honor of #VeteransDay.
Washington Crossing the Delaware
Painting by Emanuel Leutze (1851) pic.twitter.com/jNVfGA6yp5

The morale boost that resulted from Washington’s surprise attack has continued to grow in stature and legend in classrooms across the country, in part because of Emanuel Leutze’s painting. Depicted larger in size than the other men on the boat, Washington’s stature is representative of the importance he played in reigniting the American cause during the war. Painted in the 1850s during a period of unrest and sectionalism in the United States, the painting worked to convey a sense of nationalism and served as a symbol for unity. Many studies have been done to analyze Leutze’s use of the Stars and Stripes flag or his placing of an African American in Washington’s boat. These subtle symbols reinforced the hopes that Leutze had for his own country of Germany, while also becoming an instant American icon. Today, the portrait hangs in the Metropolitan Museum of Art in New York, continuing to inspire people while reminding them of the incredible challenges Washington and his men faced.

The painting has inspired generations since. George Washington’s victory after crossing the Delaware River inspired American forces during the war and was pivotal in their eventual victory in the revolution.