Warren’s Tax Plan Would Hit Some With Rates Over 100% 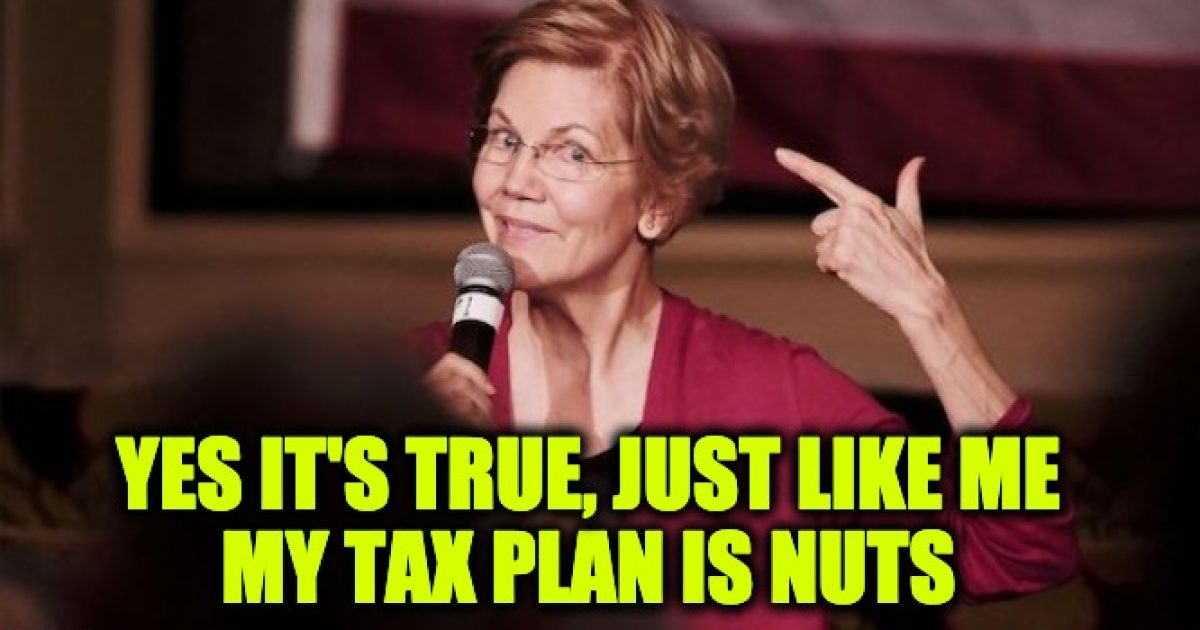 Tax rates higher than 100 percent could result from the combination of several tax hikes Warren has called for on the ultra-wealthy, as first reported by The Wall Street Journal. That includes increasing the top income-tax rate to 39.6 percent from 37 percent, imposing a new 14.8 percent on Social Security, slapping a 6 percent tax on individuals worth more than $1 billion, and requiring investors to pay capital-gains taxes at the same rates as other incomes.

Democrat Elizabeth Warren’s Tax Plan Would Hit Some With Rates Over 100% https://t.co/HnPBeGqVJn

Stealing over 100% of people’s earnings. Now let that sink in for a minute. They take everything they earned, and plus some more. Just the modern Democrat party for you.

Democratic presidential candidate Elizabeth Warren has unveiled sweeping tax proposals that would push federal tax rates on some billionaires and multimillionaires above 100%.

That prospect raises questions for taxpayers and the broader economy that experts are starting to ponder: Under which circumstances would taxpayers have to pay those rates? How might that change their behavior? And would investment and economic growth suffer?

Potential tax rates over 100% could result from the combination of tax increases the Massachusetts senator proposes for the very top tier of investors. She wants to return the top income-tax rate to 39.6% from 37%, impose a new 14.8% tax for Social Security, add an annual tax of up to 6% on accumulated wealth and require rich investors to pay capital-gains taxes at the same rates as other income even if they don’t sell their assets.

And what is Warren selling here? Punish the “rich”, as if the average voters will actually see any of it in their own pockets? No. It will go toward her socialist agenda killing babies, taking guns from law-abiding citizens, open borders, climate hoax and lining her own pockets.

They have never been very good at MATH

Warren is advocating total war against the global economy…Her plan is not a plan, it’s everything you’ve ever feared about the economy coming true…People who have lateral financial mobility would literally defect to other countries… pic.twitter.com/tbSVfcD9oJ

@ewarren @GOP @HouseDemocrats Just to see whether she can pull this off, I don’t mind seeing her nomination and win. But I sure will liquidate all my stocks on the eve of her nomination.

If (God-forbid) this plan is ever implemented all the American money and jobs that President Trump has enticed to return to this country wi,, leave again.